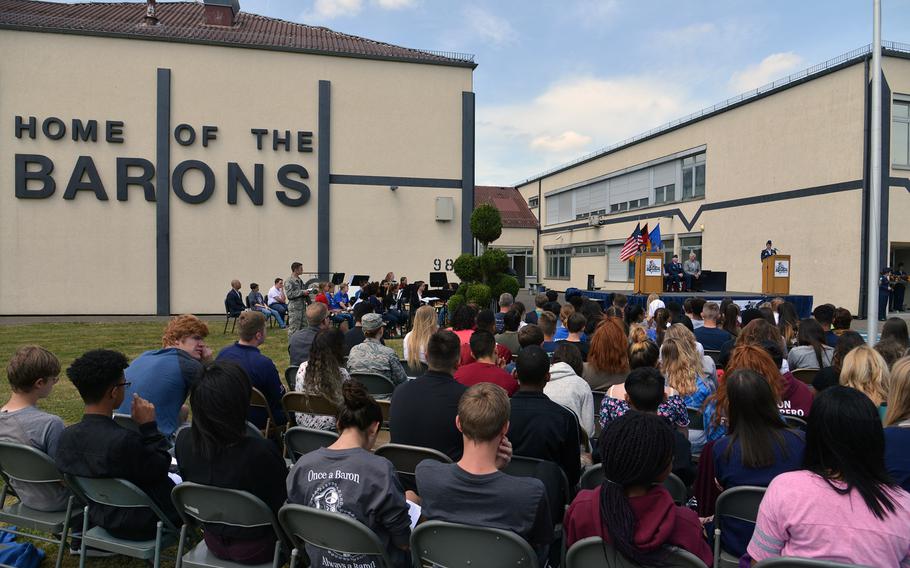 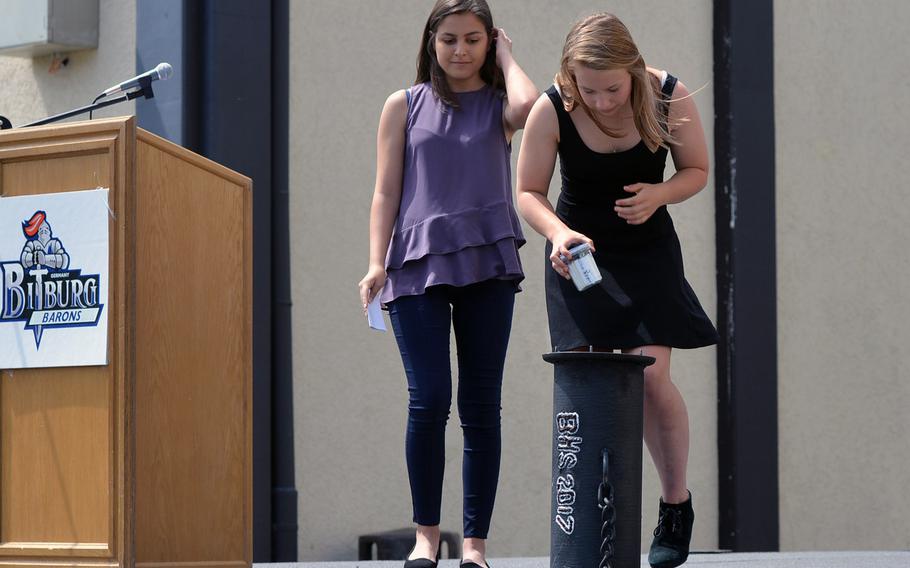 Chloe Karamzadeh, left, watches fellow senior Saige Caldwell place an item in a time capsule during Bitburg High School's closing ceremony, Thursday, June 8, 2017. Each class and the faculty put something in the capsule that is to be opened after 50 years. (Michael Abrams/Stars and Stripes) 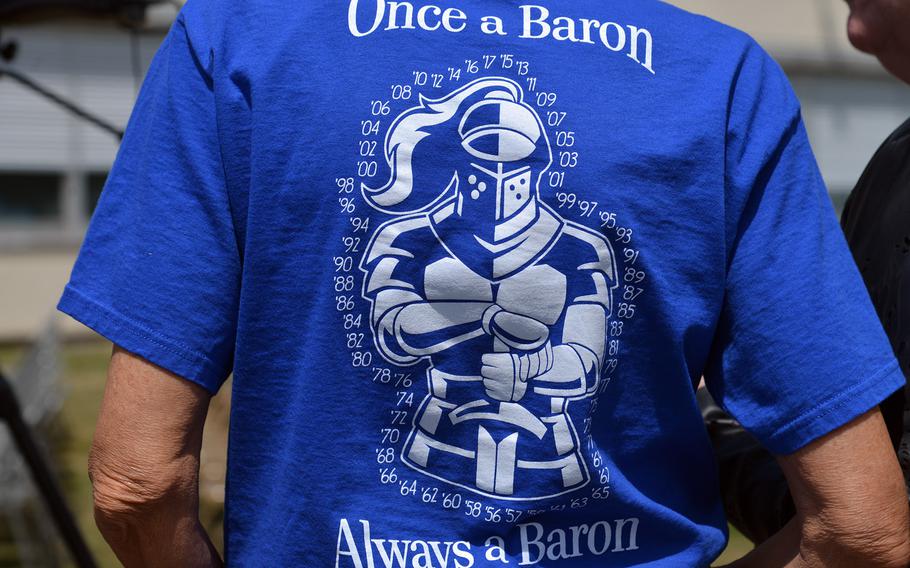 T-shirts like this one were seen at the Bitburg High School closing ceremony in Bitburg, Germany, Thursday, June 8, 2017. (Michael Abrams/Stars and Stripes) 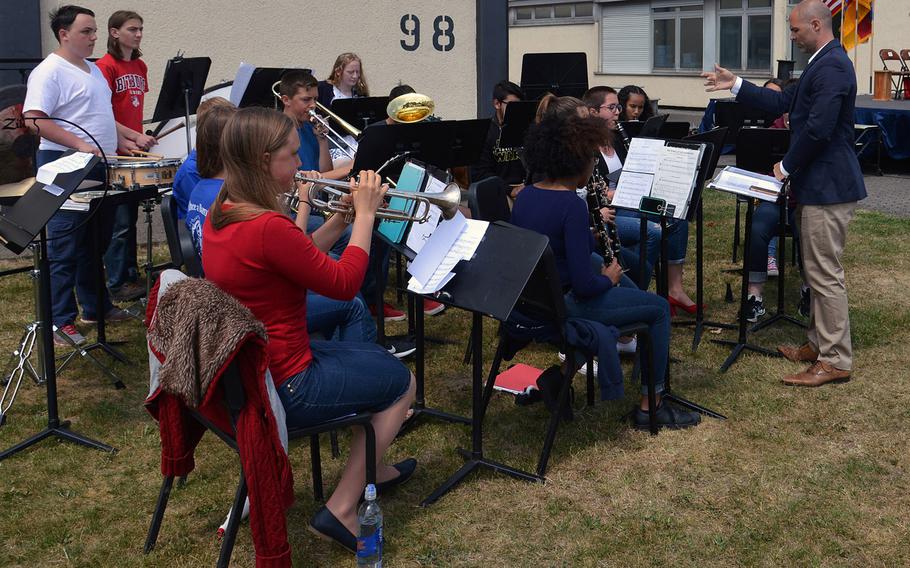 The Bitburg High School band plays the German and American national anthems at the high school's closing ceremony, Thursday, June 8, 2017. The school is closing after 60 years. The students will go to the newly established Spangdahlem High School next school year. (Michael Abrams/Stars and Stripes) 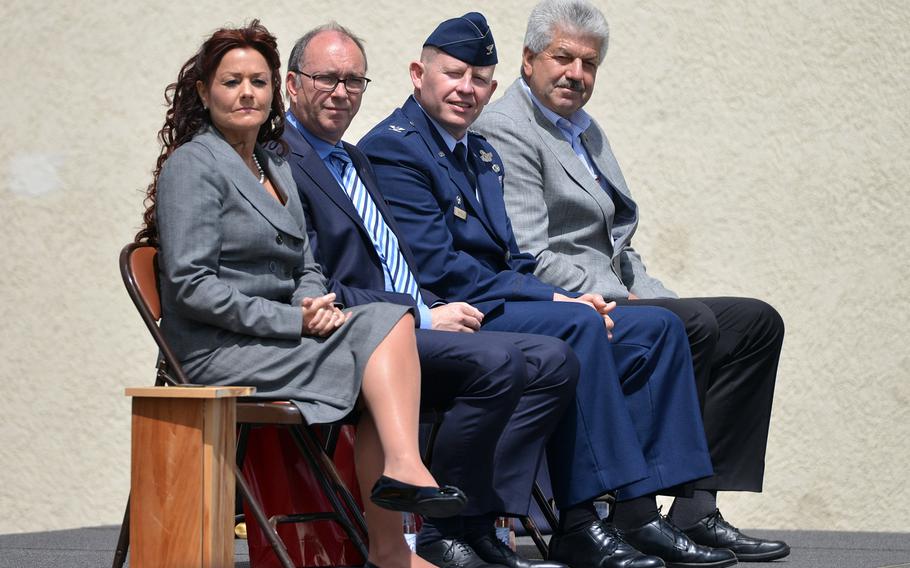 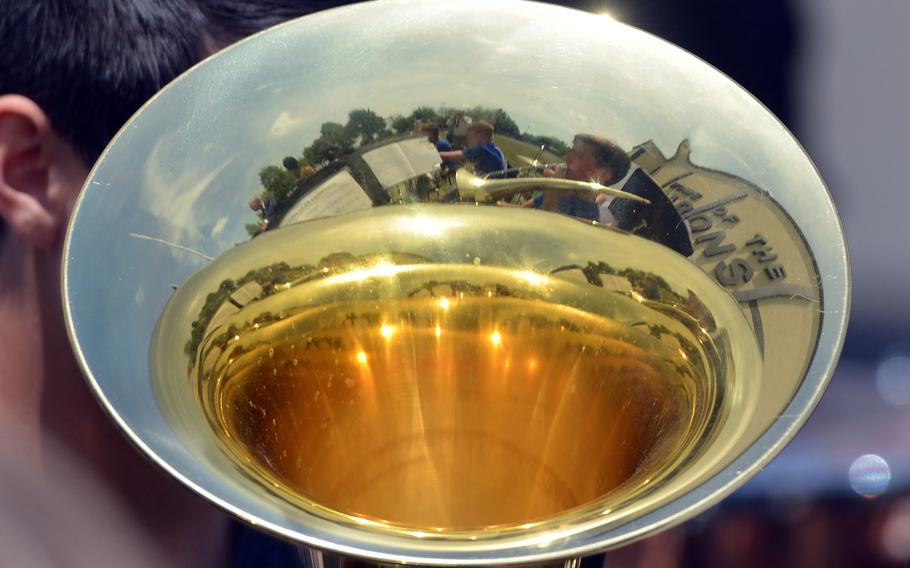 The Bitburg High School band and the school are reflected in a horn at the school's closing ceremony in Bitburg, Germany, Thursday, June 8, 2017. (Michael Abrams/Stars and Stripes) 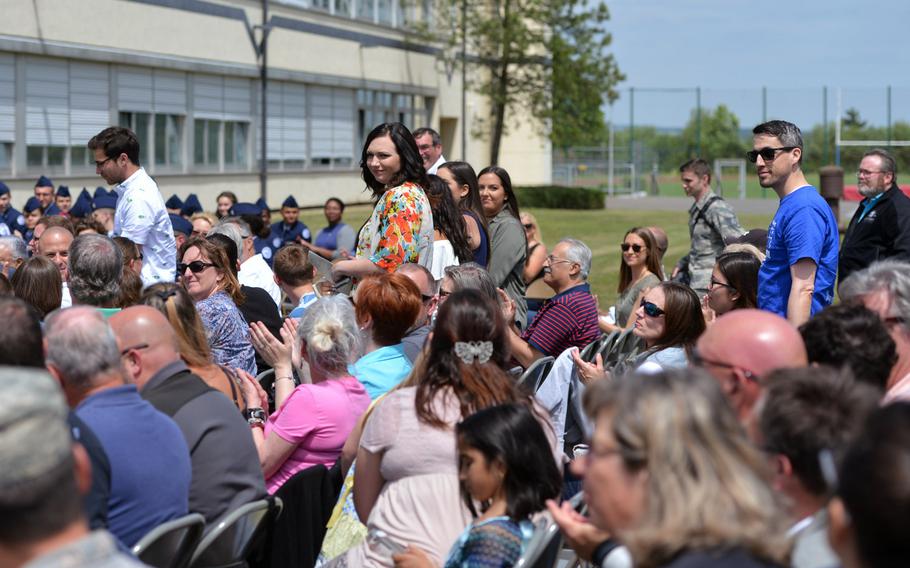 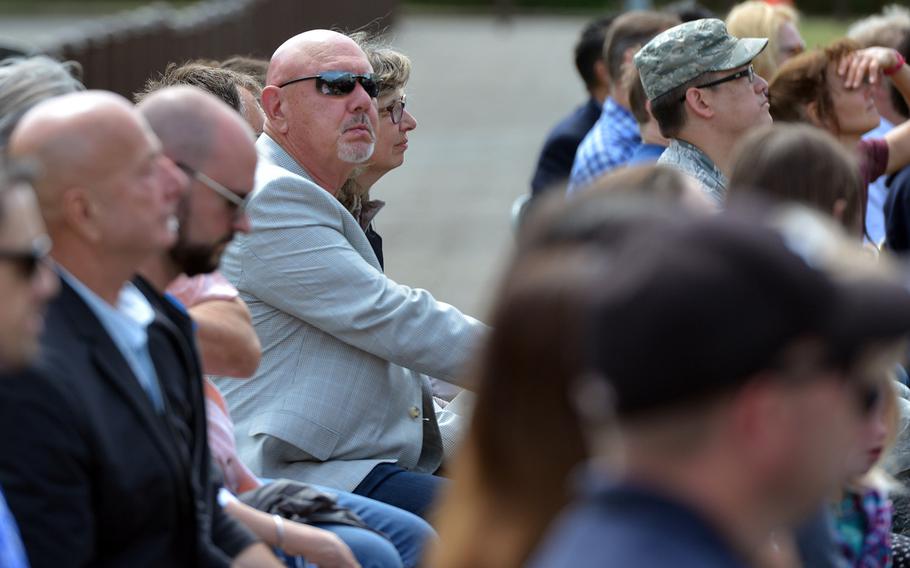 Bitburg High School alumnus Robert Frost, center with sunglasses, listens to speeches at the school's closing ceremony, Thursday, June 8, 2017. Frost attended Bitburg High from 1961 to '63. He was visiting German friends in Bitburg who surprised him by taking him to the ceremony. (Michael Abrams/Stars and Stripes) 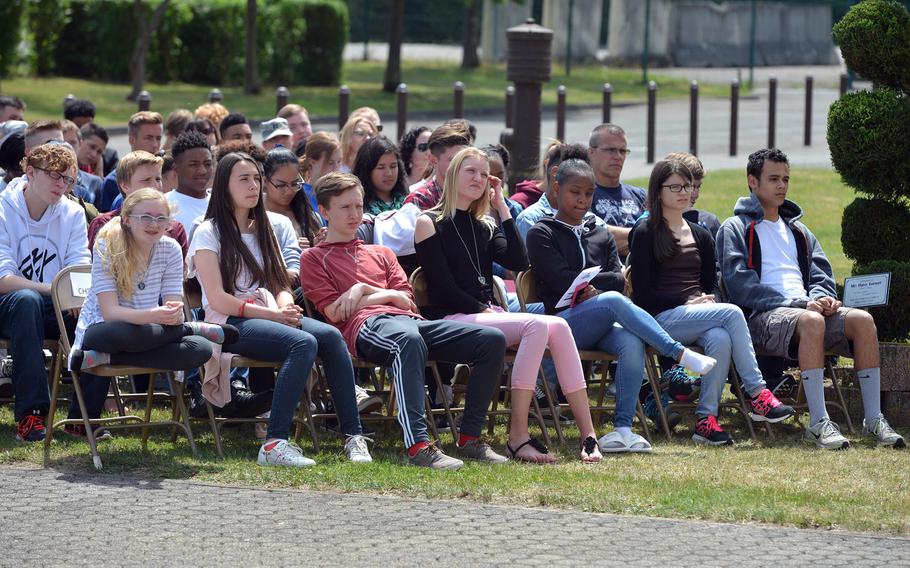 Bitburg High School students listen to speeches during their school's closing ceremony Thursday, June 8, 2017. The school is closing after 60 years. The students will go to the newly established Spangdahlem High School next school year. (Michael Abrams/Stars and Stripes) 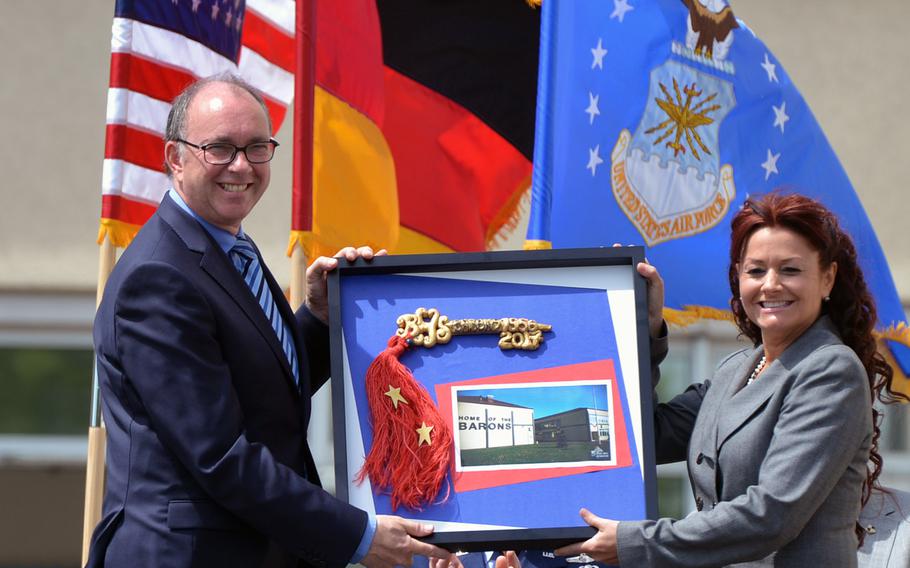 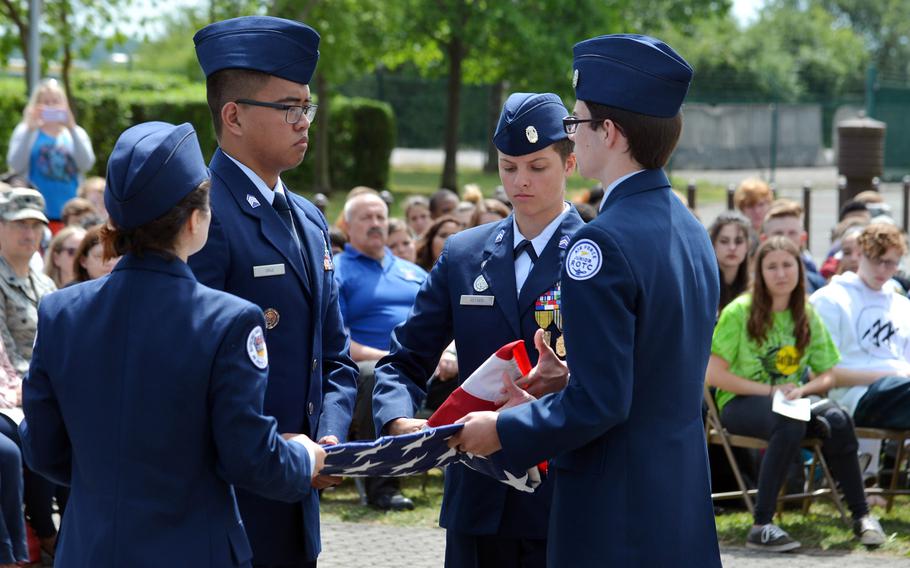 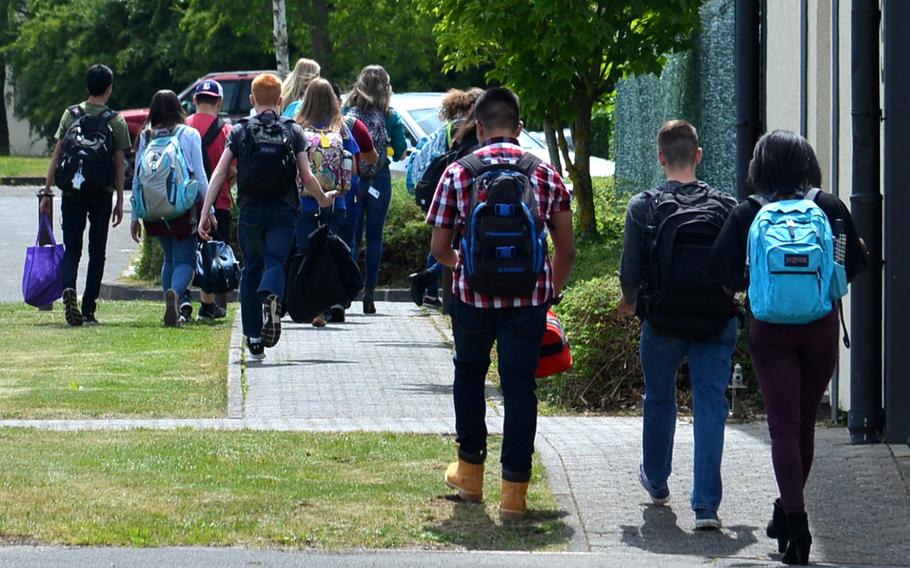 Bitburg High School students walk away from the school at the end of the day that saw a closing ceremony for the school, which is shutting its doors after 60 years of service, on Thursday, June 8, 2017. (Michael Abrams/Stars and Stripes)

BITBURG, Germany — The Bitburg Barons will soon take their place in DODEA Europe lore as Bitburg High School closes next week after 60 years.

Students, teachers, military personnel, families, community members and alumni marked the end of an era at a bittersweet closing ceremony Thursday outside the school — one of the last vestiges with activity on the mostly-deserted Bitburg Annex — exactly one week before students walk its halls for the last time.

“We’ve been prepared for a while for it to close down and it never actually happened,” said Tristan Korff, a junior who’s attended Bitburg schools his entire life. “Now that it’s actually going to close down, it feels kind of unreal but at the same time, it’s about time.”

The school opened in 1956 — and moved to the current building in 1976. This year, 154 students were enrolled, including 31 in the last graduating class.

The operations side of Bitburg Air Base, which once bustled with fighter aircraft during the height of the Cold War, closed in 1994.

The high school is one of the last buildings on the annex to close as the Air Force prepares by summer 2018 to hand over the Bitburg housing area to the German government. The last families moved out in 2014, according to Air Force officials.

The elementary school closed last June and the middle school closed in 2013. Students in those grade levels now go to school on Spangdahlem Air Base – about 20 minutes down the road from Bitburg and where most of their parents work. That’s also where the high school will be; in a set of temporary buildings that will eventually be replaced by a new middle/high school that’s currently under construction.

“Everyone here is going to Spangdahlem, and everyone who goes to school here really lives and their parents work on Spangdahlem, so there’s a natural fit there,” said Col. Joseph McFall, 52nd Fighter Wing commander. “When Bitburg closed in 1994, we’ve really just been waiting (for this).”

About 40 teachers at Bitburg are expected to transfer to the temporary school on Spangdahlem, which will be staffed for about 177 students, said Bitburg principal Jennifer Remoy, who will also be making the move.

“Of course, everyone is sad,” Remoy said of the closure. “We love being the Bitburg Barons. We feel we have left a legacy.”

But, she added, “there’s a little bit of excitement, as well. We are looking forward to ... being part of the Spangdahlem community.”

The Bitburg Barons, which claimed multiple European titles in nine different sports over the years, will be replaced by a new mascot, the Spangdahlem Sentinels, chosen by popular vote among Bitburg students and faculty, Remoy said.

Some students, however, were still partial to the Barons.

“Good for them,” said senior Noa White about the new mascot. “Once a Baron, always a Baron.”

White and other seniors told Stars and Stripes that being part of the last class at Bitburg was special.

“There was some speculation that we would be the first to be in the modules,” said senior Francesca Gatterburg. “It would have felt really incomplete to have to spend your final year in a place that you know really well in a fake school sort of, in some boxes, even though they look really good from what I’ve seen.”

Gatterburg said despite the sense of closure, she’s sad she won’t be able to come back to Bitburg to visit her former school, like her older brother now does, and reminisce with former classmates and teachers.

Robert Frost, 70, who attended Bitburg as a freshman, sophomore and junior in the early 1960s got one last chance to do just that Thursday, albeit quite unexpectedly.

He was in town from Tyler, Texas, to visit some old German family friends, including former Bitburg deputy mayor Peter Kockelmann. Frost said he had no idea his visit coincided with the school closing ceremony.

“I told him I’d like to go out to see the old base housing, see the high school and all of that,” Frost said of Kockelmann. “He said, ‘It’s taken care of. But I need your passport number.”

Frost’s years at Bitburg left him with indelible memories, coming at a pivotal time in history.

“Our first summer here was the Berlin crisis,” he said. Frost’s dad, part of a detachment that taught mechanics how to operate and maintain the engines of the F-105 fighters once stationed at Bitburg “didn’t come home for about a week” during that time, he said.

“A lot of things happened while we were here,” he said. “John Glenn was the first American to orbit the earth. I remember standing outside the school here when the news came.”

Of the school’s closing, Frost was philosophical: “I’m at a stage of life where I know there’s a beginning and there’s an end to everything. And hopefully, the spirit of what’s here will live on with the new high school on Spangdahlem.”