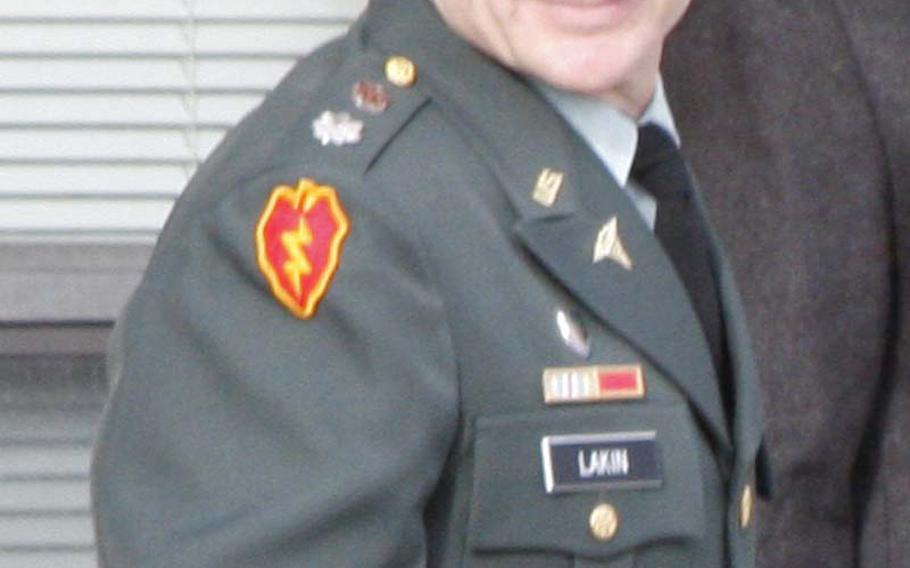 Buy Photo
Lt. Col. Terrence Lakin leaves the courthouse at Fort Meade, Md., during the first day of his court-martial Tuesday. Lakin refused to deploy to Afghanistan last spring, claiming that the order was not valid because Barack Obama's presidency may not be legitimate due to claims he is not an American-born citizen. (Leo Shane III/Stars and Stripes)

FORT MEADE, Md. &mdash; Supporters of the &ldquo;birther&rdquo; movement are labeling the court-martial of Lt. Col. Terrence Lakin another success for their cause, even as their latest hero faces dismissal from the Army and jail time &mdash; and the judge blocked any real mention of their message.

&ldquo;This isn&rsquo;t a failure. Any news is better than no news,&rdquo; said Charles Kerchner Jr., a retired Naval Reserve commander who identifies himself as a &ldquo;constitutionalist&rdquo; instead of a birther.

&ldquo;If we&rsquo;d have given up, no one would be talking about this now. The truth always wins. The truth is going to be found out.&rdquo;

Lakin, a 17-year Army physician and a member of the movement, refused deployment to Afghanistan last spring because he alleges that questions surrounding President Barack Obama&rsquo;s citizenship undermine his status as commander in chief.

Obama was born in Hawaii, but questions about his parents and overseas upbringing became a focal point of his 2008 presidential campaign. Hawaiian officials verified the existence of his birth certificate, addressing those issues for all but a fringe group that insists that Obama is not legally qualified to serve in the White House.

Lakin and his backers has hoped to reopen the debate in his court-martial, but the military judge overseeing the case blocked arguments of Obama&rsquo;s legitimacy and requests for more documentation from the White House.

It wasn&rsquo;t until the sentencing process began that lawyers showed a video of Lakin voicing his concerns about the president. His supporters in the gallery erupted in cheers.

The two-day hearing became a rallying event for the birther movement, with their most prolific and vocal members traveling across the country to support Lakin.

They cornered reporters at every break in the trial, bashing mainstream media coverage of their beliefs and reciting their unique interpretation of constitutional law. They snickered as potential jury members were quizzed about &ldquo;rumors that the president doesn&rsquo;t have a birth certificate.&rdquo;

Orly Taitz, an attorney who has filed numerous lawsuits challenging Obama&rsquo;s legitimacy, used the hearing to update supporters and press about her upcoming round of legal maneuvers. She called Lakin&rsquo;s trial a sham and a travesty, saying the restrictions placed on him &ldquo;are worse than anything I ever saw under the communists in Russia.&rdquo;

In the end, Lakin pleaded guilty to disobeying orders and offered only token opposition to a charge of skipping deployment. His attorneys called no witnesses on his behalf during the criminal phase, and declined to present any defense before closing arguments. On Wednesday afternoon, he was found guilty on the charge, too.

Lakin&rsquo;s brother Greg called the court-martial process disheartening but not discouraging for his family. Greg Lakin, an attorney, has also petitioned Obama to release proof that he was born in Hawaii.

&ldquo;We had hoped more would come out of this,&rdquo; he said. &ldquo;The frustrating thing is that Obama could clarify this today. He could come down here today and settle this once and for all. This issue is not going to go away.&rdquo;

For his guilty pleas, Lakin could face up to 18 months in prison. The conviction on the other charge could add another two years. All of the charges also carry the possibility of dismissal from the Army and forfeiture of his pay and benefits.

If Lakin had served without incident until 2012, retiring with 20 years of military service, he would have been eligible to receive at least $45,000 in annual retirement pay.

&ldquo;Colonel Lakin put himself on the sacrificial altar to bring these constitutional issues to light,&rdquo; said Eldon Bell, a Vietnam veteran who attended the hearing. &ldquo;He&rsquo;s a martyr. He&rsquo;s a patriot.&rdquo;

Prosecutors told the military jury on Wednesday that the case was a simple one that has nothing to do with the president. Lakin disobeyed orders, they said, and he refused to go to Afghanistan with his unit.

&ldquo;We are here because the accused did not act like a soldier,&rdquo; said Capt. Angel Overgaard. &ldquo;He did not perform his duty. [His men] are at FOB Bostic in Afghanistan, and here is the accused.&rdquo;

Sentencing was expected to wrap up Wednesday afternoon.