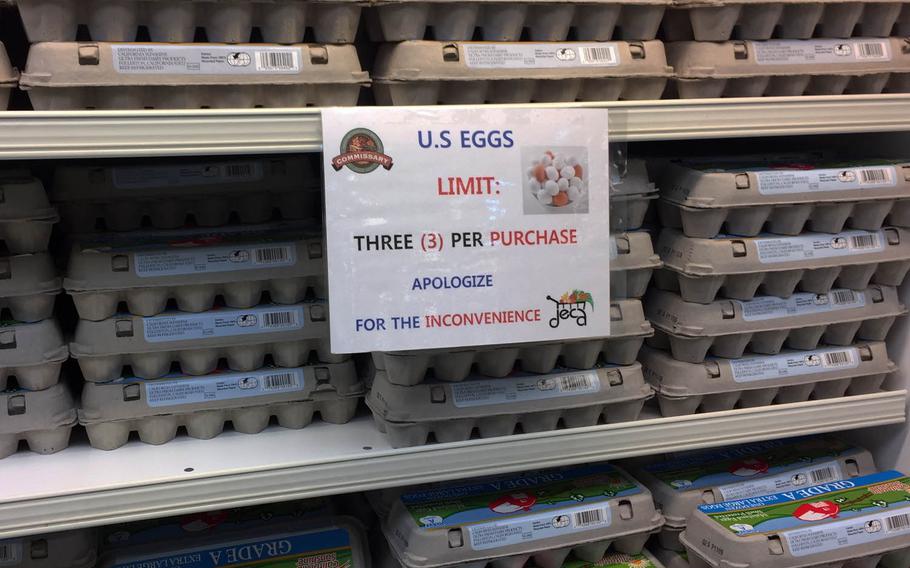 Buy Photo
Commissary customers in South Korea are facing limits on the number of U.S. eggs they can purchase as the country suffers from its worst-ever outbreak of bird flu. (Kim Gamel/Stars and Stripes)

SEOUL, South Korea — Commissary customers in South Korea are facing limits on the number of U.S. eggs they can purchase as the country suffers from its worst-ever outbreak of bird flu.

Signs went up last week announcing a limit of one carton containing 12 U.S. eggs per purchase, but on Thursday the limit was raised to three cartons per purchase.

South Korea has killed more than 33 million poultry since the first case of avian influenza was reported in November, double the previous record of nearly 14 million destroyed in a 2014 outbreak, according to the Ministry of Agriculture, Food and Rural Affairs. That has sharply driven up local market prices, and authorities imported more than a million eggs from the United States to make up for shortages.

“Because of the avian flu issue impacting locally produced eggs, a one carton limit on U.S. eggs was initiated by DeCA to ensure all authorized commissary patrons have access to available egg supplies,” spokesman Rick Brink told Stars and Stripes in response to an email query sent before the limit was raised to three cartons.

He said management expected to maintain the limit “until local supplies stabilize and consumer confidence in those products improves.”

Brink said the price of U.S. eggs has not been affected, although locally produced eggs have gone up slightly.

The price of a dozen large eggs from the U.S. was $1.69 compared with $2.33 for Korean eggs, which were unlimited for purchase, on Thursday at the Yongsan Garrison commissary.