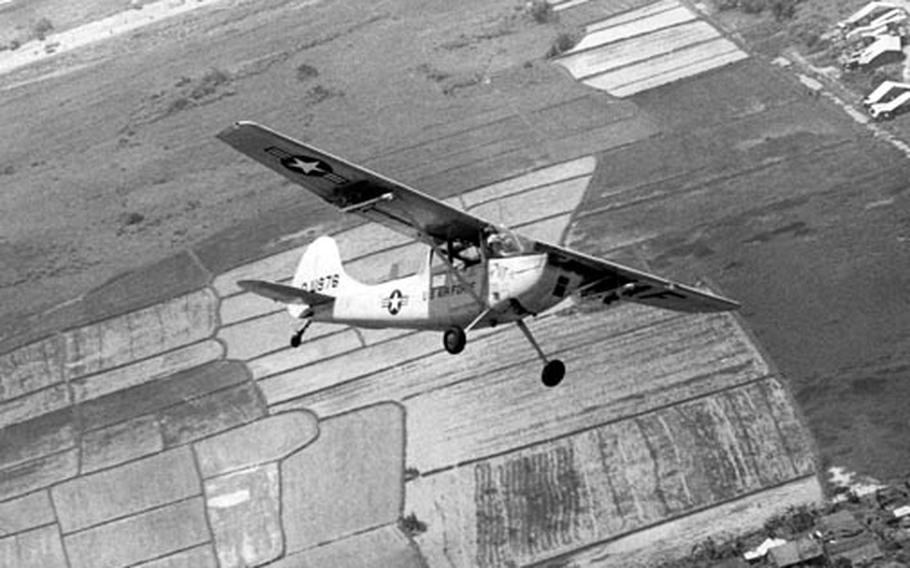 Buy Photo
A Forward Air Controller gains altitude after a low-level flight over his sector in Vietnam. (Gerard Forken/Stars and Stripes)

He gained altitude and leveled off at 1,500 feet before making radio contact.

"Looks like 'Charlie' has returned for more," he drawled. "Lots of fresh footprints along the trail — barefoot prints, at that!"

Lt. Col. Jack E. White, who had monitored the call, shook his head.

White, 18th South Vietnamese Div. Air liaison officer (ALO), knew this FAC pilot had a great sense of humor, but he was also aware of the man's daring and courage.

Capt. Dick Maxwell cast a doleful eye at the heavy, black clouds rolling in from the South China Sea. He told his observer to tighten his safety belt.

Maxwell, the Bien Hoa Sector FAC, radioed back to base to report the overcast conditions and to cancel a scheduled F100 strike. He then swooped down for one final look at the suspected Communist stronghold before heading back to Bien Hoa.

As the Bird Dog climbed it vibrated from tail to propeller. The pilot had great difficulty holding the plane on course as it was enveloped in the clouds.

Maxwell hung on, straining to keep the O1E under control.

Finally the, FAC broke through the clouds and Maxwell was able to get his bearings. Di An was just below.

The observer breathed a sigh of relief; but it wasn't over yet. As Maxwell carefully landed in moderate to heavy turbulence, gusts of wind almost flipped the aircraft over. It finally came to rest at the far end of the runway.

Later, after the low ceiling disappeared, Maxwell was back up and resetting the scene for another try by the F100 Supersabres.

The FACs serving the Bien Hoa sector of the 18th South Vietnamese Div. are on call 24 hours a day.

Maj. James W. Empey, Bien Hoa sector ALO, has had one day off in six months.

Empey, a World War II ace, said that being a fighter pilot is the greatest asset in directing strike missions. "Having flown the F100," he said, "you know exactly what it looks like from the jet fighter's seat and can put yourself in his plane.

"Locating the target and seeing it destroyed gives a man a great sense of satisfaction," he added.