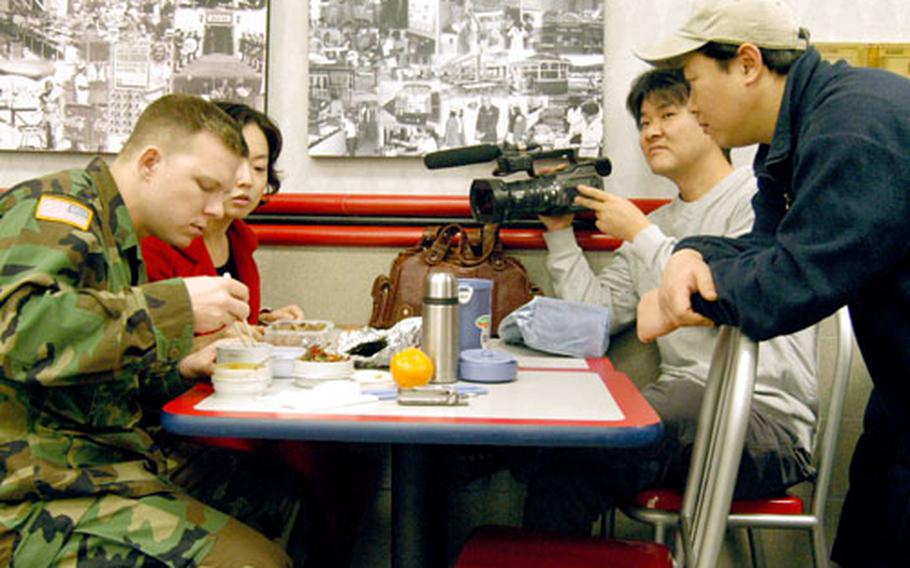 Army Sgt. Christopher Largent gets a haircut while a video cameraman films him for an upcoming program on South Korea’s KBS2 station. The station will air a set of segments about Largent and his South Korean wife during its 8:50 p.m. broadcasts of March 6-10 show called “In Gan Geuk Jang.” (Steven Hoover / U.S. Army)

PYEONGTAEK, South Korea &#8212; One fall day a few years ago, Army Sgt. Christopher Largent discovered an art gallery on the eighth floor of a department store where he was shopping in Daegu, South Korea.

Having studied fine arts before enlisting in the Army, he went in for a look at a ceramics exhibit.

He soon found himself talking to two young women who also were looking things over. One spoke some English, the other almost none.

&#8220;The conversation started because of a genuine interest in ceramics,&#8221; said Largent, 28, a personnel clerk at Camp Carroll with the 307th Integrated Theater Signal Battalion.

It took about 30 seconds for a voice inside his head to tell him that the woman who spoke some English was &#8220;very attractive.&#8221; And after about 20 minutes Largent sensed the interest might be mutual.

Her name was Yu-sung, and she shared his interest in art, having majored in ceramics at Daegu Catholic University. The next day she drove from Daegu to Waegwan, and they had lunch in a local restaurant.

Eight or so months later, in June 2003, they were married.

Not an uncommon tale of love and marriage but theirs will be one a lot of people will soon become intimate with. From Monday through Thursday, South Korean TV station KBS2 will chronicle their married life in its regularly scheduled program &#8220;In Gan Geuk Jang,&#8221; starting at 8:50 p.m.

The woman asked Yu-sung to e-mail her the same day with her and her husband&#8217;s photos and a summary of how they met. A day later, a Daegu-based video crew on contract to KBS2 all but moved in with the Largents and filmed their mealtimes and housework, their shopping trips, visits to her parents, time at work. They spent about 18 days, 16 of them in actual filming.

The crew was friendly and the couple got along well with them. But the project had its pressures.

Her discomfort eventually wore off. But by then, the crew was pretty much wrapped up.

They told the Largents a payment of 1 million South Korean won (about $1,000) was in their future.

They hope the broadcasts will help erode negative stereotypes of marriages between South Koreans and U.S. servicemembers.

The Largents have their own stories to tell about that, too.

Like the occasional cab driver who&#8217;s told Yu-sung she&#8217;s attractive enough to have drawn any number of Korean suitors, so why did she marry Largent?

Or the incident around Christmas 2002 when the couple tried to enter a Daegu restaurant. An employee stopped them at the entrance and pointed to a blue and white sign that read in English: &#8220;Foreigners not allowed.&#8221;