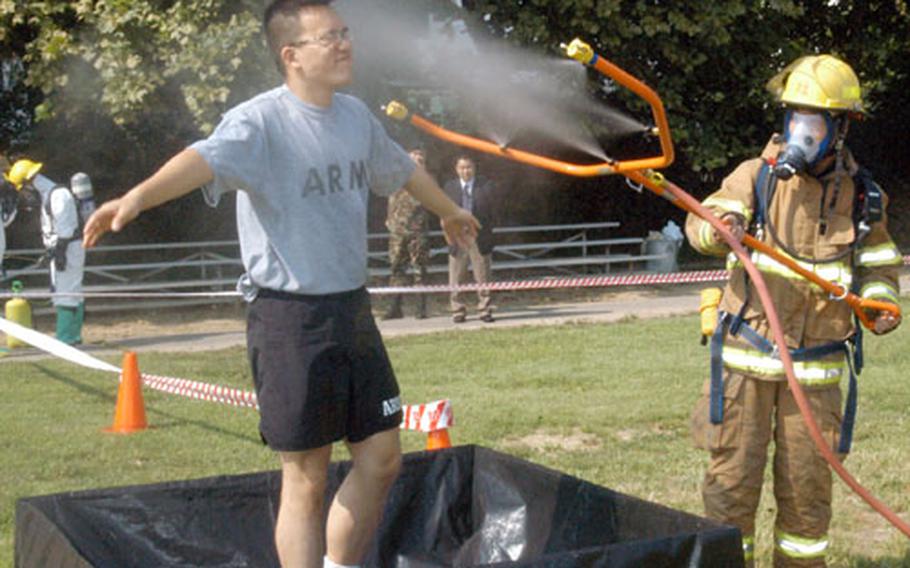 A mock casualty, Cpl. Lee Sang-joon, is sprayed down as part of decontamination process during a biological attack exercise at the U.S. Army&#39;s Camp George in Taegu, South Korea, on Thursday. (Courtesy of U.S. Army) 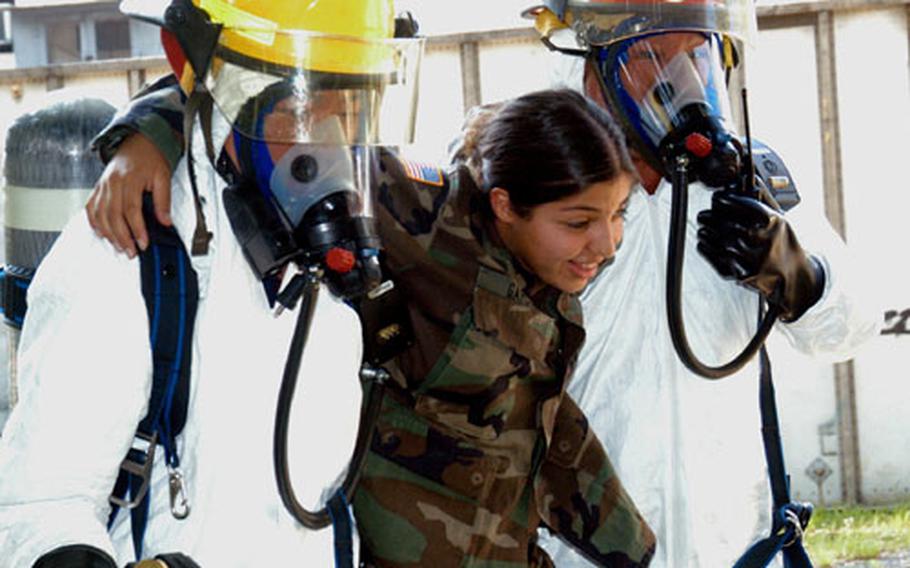 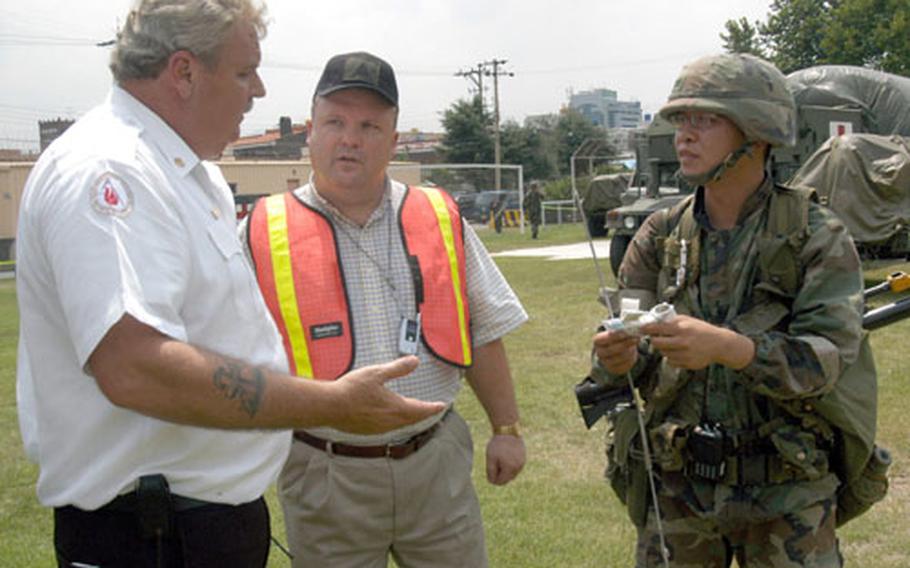 During a biological attack exercise at the Army&#39;s Camp George in Taegu, South Korea, on Thursday, emergency response officials receive from a soldier a mock report that chemical agent tests indicate the area is no longer contaminated. The soldier&#39;s report was part of the exercise scenario. At left is Area IV fire chief Bob Purvis; James Adamski, center, is director of Area IV&#39;s Directorate of Plans, Training, Mobility and Security. (Courtesy of U.S. Army)

The increased role for the soldiers comes out of a session held Friday at Camp Henry in Taegu, when Army officials took a close look at a biological attack exercise held the day before at nearby Camp George, a small post consisting mainly of a family housing area and the Taegu American School.

Thursday&#8217;s exercise simulated an attack in which terrorists released plague agent into the air. Under the training scenario, the usual first responders &#8212; fire, police and medical personnel &#8212; had to rush to the scene, detect the type of agent in the air, treat mock casualties and protect housing areas and other base residents from further harm.

In addition to medical personnel, Thursday&#8217;s exercise included a &#8220;quick reaction force,&#8221; or QRF, of troops drawn from various logistical and administrative jobs, who in similar exercises have taken direction from military police to aid in securing the area.

Troops did the same Thursday, but also were given other tasks: informing housing area residents of the situation and directing them to safety, as they would in an actual attack, and taking soil samples to test whether a certain area was contaminated.

From Thursday&#8217;s exercise, &#8220;We learned that we can use the QRF in notifying personnel in the area. They used them as a biological detection team &#8230; so they&#8217;ve got many roles that they can play to assist the Area IV first-responders &#8230; containing the site and actually assisting us with some of our consequence-management plans to get the job done,&#8221; said James Adamski, director at the Area IV Support Activity&#8217;s Directorate of Plans, Training, Mobilization and Security.

&#8220;They haven&#8217;t been used that much in the past because we&#8217;re still determining the roles of all our key players, and they are a key player in an incident response to a terrorist attack.

&#8220;During that exercise we anticipate that they will also be called in just like this exercise,&#8221; he added.

The training, officials said, is also giving the troops &#8212; especially officers and sergeants &#8212; practice at something comparatively new for military units, but something that may become common practice in the era of the war on terrorism: taking direction from a police, fire or other civilian official acting as the on-scene commander.

Her unit&#8217;s medics played their usual role of treating casualties, but their training benefits lay partly in seeing how they fit in with the many other units responding, including the QRF troops.