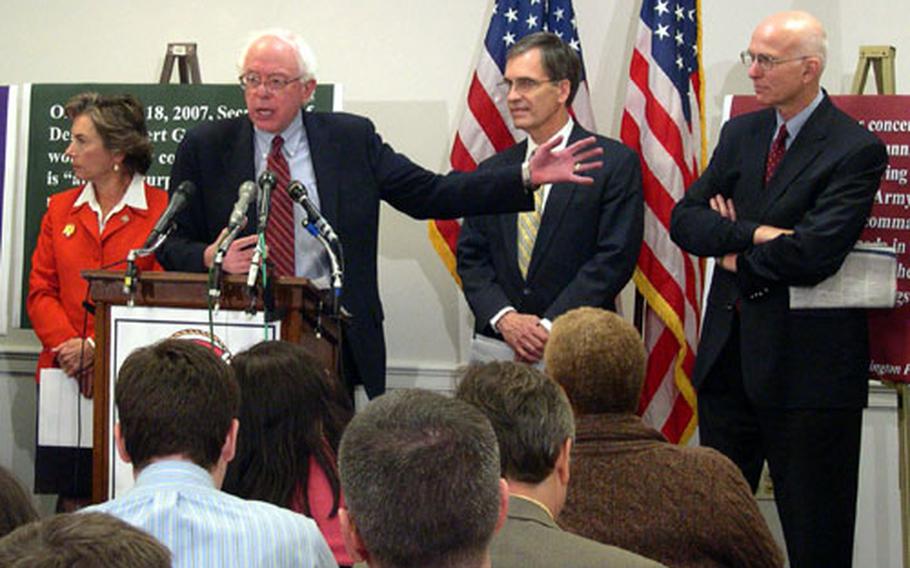 Sen. Bernie Sanders, I-Vermont, speaks with reporters about a bill sponsored by Rep. Jan Schakowsky, D-Ill., left during a Capitol Hill press conference Wednesday. The measure would phase out the use of private security contractors in Iraq and Afghanistan. At right are Rep. Tom Allen, D-Maine, and former assistant secretary of defense Lawrence Korb. (Leo Shane III / S&S)

WASHINGTON &#8212; A group of Democratic lawmakers wants all contractors working as bodyguards for U.S. diplomats out of Iraq and Afghanistan in the next six months, saying that job is best left to military professionals.

Legislation proposed by the representatives would also phase out the use of all private security contractors by U.S. agencies in combat zones worldwide by 2009, and require more accurate reporting on the number of contractors employed and killed in those conflicts.

Defense Department officials would not comment directly on the legislation, but said the use of private contractors for any military mission depends on the size of the available military force, the special skills of the outside specialists and needs of commanders on the ground.

&#8220;It can enable us to free up troops for tasks like patrolling or training Iraqi troops, or other important missions on the ground there,&#8221; said spokesman Lt. Col. Mark Wright.

&#8220;You&#8217;ll find many of the same security contractors at bases here in the U.S. The guards at the Pentagon are a private security firm. They have a very limited function, but that frees up other resources.&#8221;

Congress and the DOD estimates on the number of private contractors in Iraq and Afghanistan range from 40,000 to 180,000, but most of those are in nonsecurity support roles.

Food service workers, convoy drivers and other nonsecurity contractors would not be affected by the legislation.

Lawmakers at Wednesday&#8217;s event estimated the six-month timeline for diplomatic bodyguards would likely affect about 900 security contractors, a force size they said could easily be replaced with troops already in those countries.

They dismissed claims that troops would need to undergo major retraining to act as bodyguards, noting that many guardsmen and reservists have been filling nontraditional roles in Iraq and Afghanistan over the last few years.

Schakowsky also noted that contractors&#8217; pay is typically far above the troops they work beside, potentially damaging morale and hurting retention efforts.

But more importantly, the lawmakers said, the U.S. needs to take a stance against the use of contractors for those type of tasks. Rep. Bob Filner, D-Calif., called companies like Blackwater and DynCorp &#8220;mercenaries&#8221; whose main motivation is profit, not the ideals and honor that the military stands for.

Danica Zovko, whose son Jerry was killed while working for Blackwater in Fallujah in 2004, said she believes stricter reporting guidelines will also refocus attention on the contractors who are doing positive work in Iraq, thereby helping to keep them safer.

No timeline has been scheduled for hearings on the bill. Sen. Bernie Sanders, I-Vt., spoke at Wednesday&#8217;s event and pledged to support the measure in the Senate.