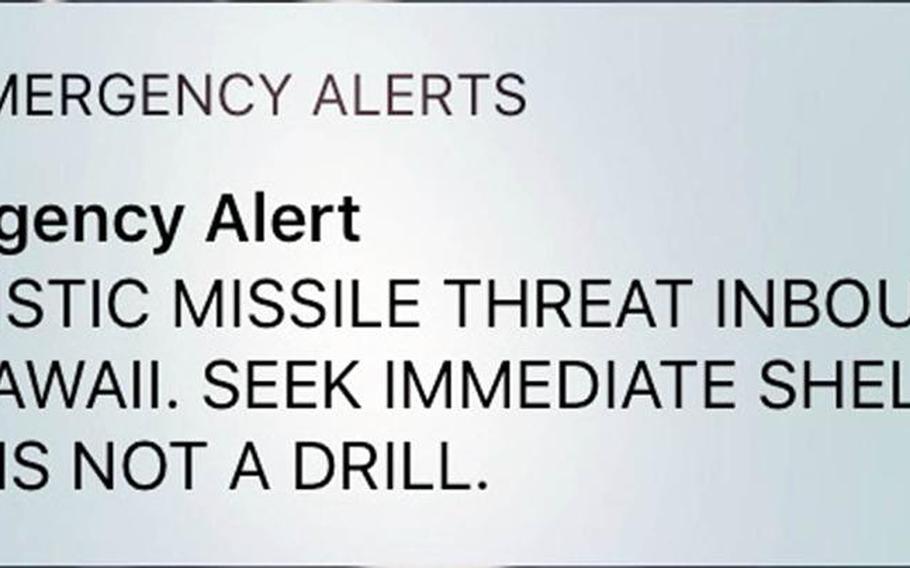 A U.S. Senate bill introduced Wednesday, July 18, 2018, would upgrade the nation's emergency warning system in the wake of the false missile alert in Hawaii in January. (Courtesy of the U.S. Army)

FORT SHAFTER, Hawaii — Mobile phone users would no longer have the option of opting out of federal alerts about impending missile attacks or other imminent threats under a bipartisan bill introduced Wednesday in the Senate.

The Reliable Emergency Alert Distribution Improvement Act of 2018 would also require active alerts issued by the president or the Federal Emergency Management Agency to play repeatedly on television and radio, rather than just once.

The legislation, introduced by Sens. Brian Schatz, D-Hawaii, and John Thune, R-S.D., is an attempt to upgrade the nation’s alert system in the wake of a false missile alert issued in Hawaii on Jan. 13.

On that Saturday morning, many mobile phones received an alert saying a ballistic missile was inbound and that residents should seek immediate shelter. “This is not a drill,” the message said.

The alert had been issued by mistake, but it took state officials 38 minutes to push out a second message saying there was no threat.

Meanwhile, some cellphones received no alerts at all, and television broadcasts generally offered no information about the supposed incoming missiles in the first 15 minutes – which is about all the warning time the state would have if a ballistic missile were launched from North Korea.

The false alert came at a time of elevated tensions between the United States and North Korea, which during the previous year had conducted tests using missiles that could potentially reach Hawaii.

The false alert set off mass panic, with some residents hiding in ditches, tunnels and basements.

“When a missile alert went out across Hawaii in January, some people never got the message on their phones, while others missed it on their TVs and radios,” Schatz said in a statement issued Wednesday. “Even though it was a false alarm, the missile alert exposed real flaws in the way people receive emergency alerts.”

The proposed Senate legislation would also authorize research for creating a system of emergency alerts to appear on audio and video online streaming services, such as Netflix and Spotify.

The bill would mandate FEMA to create a set of best practices for issuing alerts, avoiding false alerts and retracting false alerts if they occur. It would also establish a reporting system for false alerts so the FCC could track them to examine their causes.

Last week, the FCC authorized state and local officials to conduct “live code” tests of the Emergency Alert System. Such tests would use the same alert codes and processes that would be used in an actual emergency to increase both the proficiency of those at the helm and the public’s knowledge of the system.

In June, the Senate passed a bipartisan bill that would give the federal government the sole authority to alert the public of a missile threat.