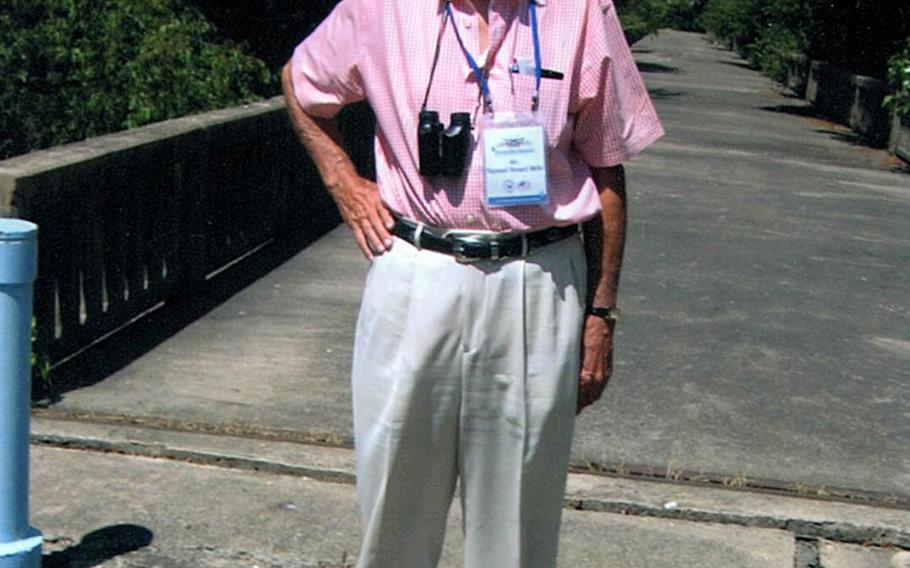 Ray Mellin stands at the "Bridge of No Return" in the Joint Security Area of the Demilitarized Zone during a trip to Korea in 2016. (Courtesy of Ray Mellin)

Ray Mellin stands at the "Bridge of No Return" in the Joint Security Area of the Demilitarized Zone during a trip to Korea in 2016. (Courtesy of Ray Mellin) 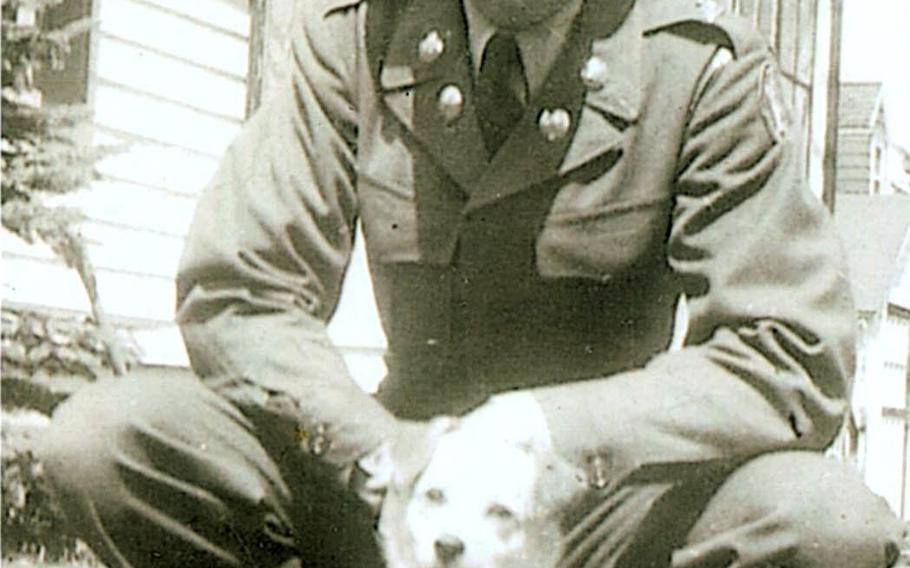 Ray Mellin poses with a dog in 1950. (Courtesy of Ray Mellin)

American troops in war zones have received combat pay since 1952. Yet for one group of warfighters — Korean War POW-MIAs — the supplemental compensation was capped for their entire time in captivity.

Maloney introduced the Never Forgotten Korean War POW Act in May, starting the legislative process. It seeks to provide combat pay to all living Korean War POWs for each month spent in a captured or missing-in-action status, adjusting for inflation. Their payments had been previously capped, by law, at three months, the only group of combat veterans with those restrictions.

The bill has been sent to the House Armed Services Committee but has not been set for a vote. It would then have to be passed by the House and Senate and then be signed by the president to become law.

“All of our [Korean War] POWs are heroes,” Maloney said in a statement to Stars and Stripes. “They deserve fair compensation for their honorable service like the veterans from every other war.”

The issue was first brought to Maloney’s attention at a town hall meeting by a friend of Cornwall, N.Y., resident and former POW Ray Mellin, 89.

Mellin later told Maloney that the combat pay restriction for POW-MIAs never felt right to him, especially since he languished in prisoner-of war-camps for years. Maloney began to investigate, a spokesman for his office said.

In 1950, the Army submitted a proposal for legislation recommending that “hazard duty pay” be paid out “to personnel involved in combat,” according to the Defense Department website. They argued that it was unfair that servicemembers engaged in combat did not receive supplemental income when others did for flying, submarine or parachute duty.

Congress agreed and passed the Combat Duty Pay Act of 1952, which paid $45 per month to servicemembers serving at least six days in designated frontline combat units or those wounded, injured or killed by “hostile fire,” the defense website said. It also banned other forms of supplemental compensation, such as flight or submarine pay, and limited the combat pay of POW-MIAs to “not more than three months.”

Neither Mellin, Maloney’s office nor the Army could say who was responsible for capping the pay for Korean War POW-MIAs.

After the conflict, the Navy and Air Force protested the combat pay law as they were effectively frozen out, and “broad, geographically based zonal eligibility” was instituted, the defense website said. It is a system that endures to this day, effectively leaving Korean War POW-MIAs as the only group excluded from full compensation.

“We were in the prison camp two years already when they [decided] they weren’t going to pay us more than just the three months for combat pay, and in all that time, we were getting strafed, we were bombed, guys were dying every day and we just couldn’t figure out why,” Mellin told Stars and Stripes.

“I think it was just terrible. Why they did it all of a sudden; I don’t know if it was to save money or whatever. It was very upsetting ... It’s not really a matter of the money, it’s a matter of why it was done.”

The horrors of war Ray Mellin was born in Stamford, Conn., and bounced between foster and group homes. He joined the Army in 1949. A year later, the 21-year-old corporal was in Korea, a medic with the 21st Regiment, 24th Infantry Division.

Mellin’s unit was positioned on the high ground on both sides of a pass just north of Osan when they were besieged by North Korean tanks, trucks and wave after wave of ground troops. With scores of wounded and low on ammunition, they were finally ordered to retreat south.

“It was chaotic with our guys running down the hill into rice paddies and gullies trying to bring the wounded with us,” Mellin recalled.

At one point, they saw soldiers ahead. They thought they were South Korean, but they were mistaken.

“I knew we were in trouble when I saw the red star on [their] hats,” he said. “I found out years later that the severely wounded who could not be moved when we retreated were either shot or stabbed by the North Korean troops.”

Over the next three years, Mellin and his fellow POWs experienced unimaginable horrors. There were forced marches, summary executions; men were left to freeze to death. They suffered from intestinal worms and were covered in a layer of lice. More than half died in captivity.

“We became … certain that we would not survive,” Mellin wrote in a memoir he provided to Stars and Stripes. “After all, we saw hundreds of POWs die, mostly because of the severe cold and lack of nutrition.”

On July 27, 1953, those who had survived the brutal captivity were told they were going home.

Mellin arrived in San Francisco on Sept. 13. He spent one year in the hospital “gaining weight, getting rid of scabies and roundworms.”

Mellin said he found out about the cap on combat pay as soon as he got out of the military. It was a slight that bothered him even as he married, had children and worked until retirement in a laboratory.

“My fervent wish is to have this injustice made right, not for the monetary reasons, but to honor the remaining few Korean War POWs,” Mellin said in a statement released by Maloney’s office.

Long odds Mellin and Maloney’s attempt to get full combat pay for Korean War POWs is not the first.

Fellow 24th ID soldier and POW Wilbert “Shorty” Estabrook, 87, worked with now-retired California Democratic Sen. Barbara Boxer for years to try to accomplish the same thing, according to Estabrook and Mellin. Estabrook said ultimately, the Army stood in the way.

Estabrook — captured July 15, 1950, by the North Korean Army and held about 38 months in captivity — said he believes Maloney’s bill does not go far enough. He wants to see the next of kin of those deceased receive their loved one’s combat pay as well. But he hopes Congress will finally set things right. He believes the overall amount due the POWs would be small.

“This issue can be settled with little cost,” he said. “Combat pay was $45 a month in those days. Perhaps a statutory amount could be established to speed up the process.”

Estabrook is not optimistic that Mellin and Maloney will succeed.

“If the chair is of one party and the one introducing from another party it could remain in limbo forever,” he said. “The Army would not budge on this issue when I worked for its approval for years. Why would they change now?”

The website govtrack.us, which monitors legislative activity, puts the chances of the bill passing at just 2 percent, citing Skopos Labs.

Despite long odds, Maloney attempted to attach the bill to the 2019 National Defense Authorization Act being hashed out this summer but it was ruled to be out of order by the House rules committee. He has reached out to the Congressional Budget Office to score the bill but that has not happened.

His office says he remains optimistic despite his busy future: He will run for New York attorney general while also mounting a re-election campaign.

“Rep. Maloney … will keep pushing for this bill’s passage no matter what,” a spokesman said.

Maloney said that for too long the Korean War has been thought of as the “forgotten war.”

“That has to change,” he said. “It’s like Ray says — this is about a lot more than money — it’s about making sure our Korean War vets know how much we appreciate their service — and that they’re not forgotten.”