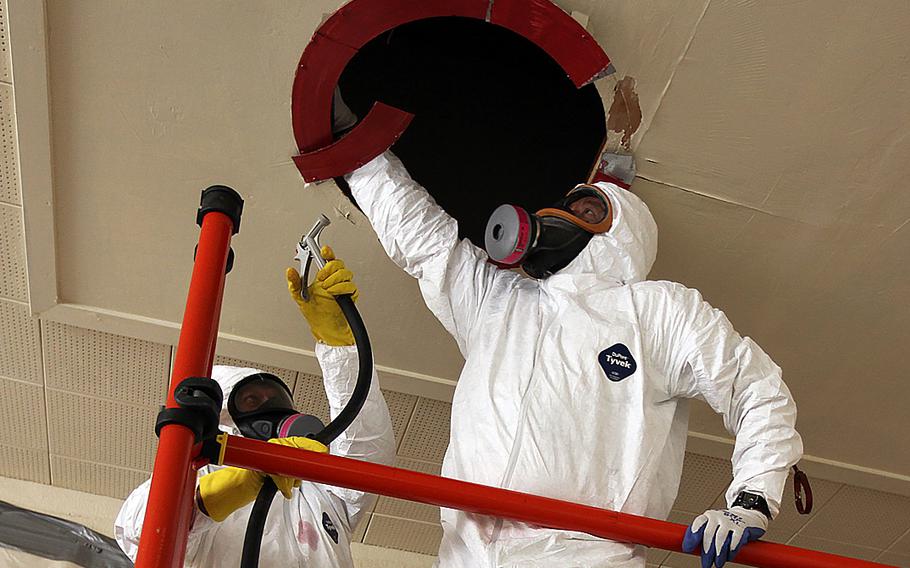 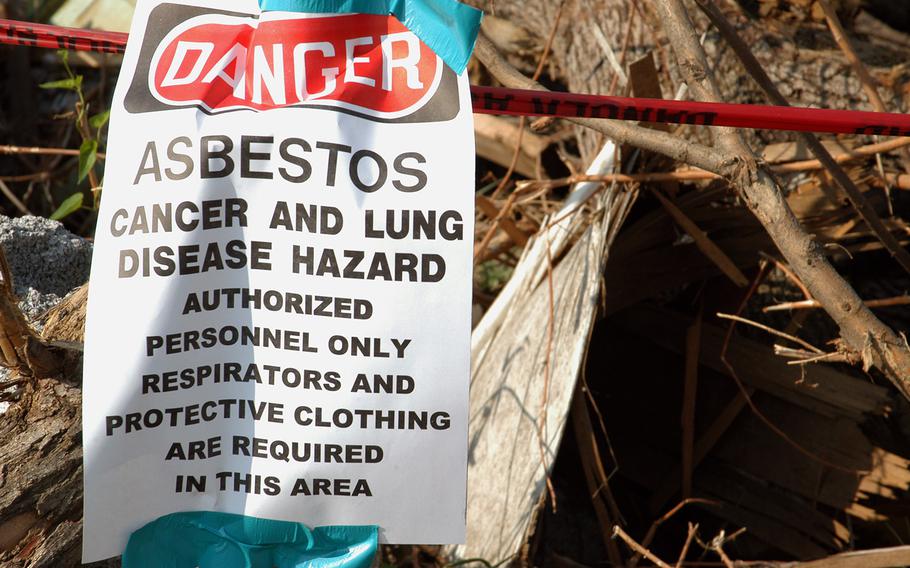 A sign warns of hazardous material as U.S. Army Corps of Engineers manage debris removal operations in Joplin, Mo., on July 29, 2011, following a deadly tornado in May 2011. A bill passed by the House in January 2016 would hand the asbestos industry a key legal advantage when fighting the claims of terminally ill veterans, critics of the legislation say. (Mark Haviland/U.S. Army)

WASHINGTON — Asbestos poisoning is personal for Garry Hall, a retired admiral and national executive director of the Association of the United States Navy.

Hall’s father-in-law, who was a sailor in the 1950s, died this week due to lung cancer that the family believes was connected to asbestos exposure. Hall said his father-in-law signed onto a class-action lawsuit against a manufacturer of the material while lying in his hospital bed.

“If somebody is in their 60s or 70s and in asbestos litigation, the clock is ticking and asbestos big industry can run the clock out,” he said.

Hall and other critics say a bill moving through the House this week would hand the asbestos industry a key legal advantage when fighting the claims of terminally ill veterans.

The legislation, sponsored by Rep. Blake Farenthold, R-Texas, changes how information on billions of dollars in asbestos-poisoning settlements – much of it from sailors exposed decades ago – is handled. Republican sponsors claim it will root out fraud, in part by publishing claimants’ names, medical histories and partial social security numbers on the Internet.

Veterans comprise the largest segment of the more than three million asbestos-poisoning claims paid out since the 1980s when the federal government began regulating the flame-retardant material and the military stopped using it. Companies that produced asebestos and worked to hide its dangers set up special trusts to pay victims, whose numbers surged in the past decade due to the long delay between asbestos exposure and the development of lung cancer.

“I think it is going to be both a good-government piece of legislation and it is going to preserve the assets of these trusts for veterans, who are the biggest percentage of these claims, and the general public,” said Farenthold, who is the latest Republican lawmaker to float the legislation.

A vote on the House floor was expected either Thursday or Friday. A companion bill was recently filed in the Senate by Jeff Flake, a Republican from Arizona.

Farenthold said unscrupulous attorneys are “double-dipping” by filing multiple awards for victims and that fraud is threatening to empty the asbestos trusts. About 60 different trusts established across the United States and have paid out more than $17 billion, according to the Government Accountability Office.

The bill requires trusts to disclose confidential settlements with veterans to industry defense attorneys who request it and send claimants’ personal information to bankruptcy courts, where it would be published on a docket and be available for download on a nationwide filing system.

Defense attorneys could use the information to check veterans’ trust settlements for fraud and “ensure there is more money there in the future,” Farenthold said.

Some trusts reduced payments to veterans and others in recent years due to dwindling money in the accounts funded by asbestos companies. The GAO reported trusts have paid out $17.5 billion of the total $37 billion that they originally contained.

The average trust payout for a claimant with malignant cancer was $34,000, according to a study by the Rand Corporation in 2008.

The GAO also found in 2011 that the possibility of defrauding trusts exists. However, the instances of fraud among the 3.3 million claims might be small, according to a Wall Street Journal investigation in 2013 that found about 3,000 cases of potential fraud among 850,000 settlements it reviewed – a rate of .3 percent.

The U.S. Chamber of Commerce, which represents business interests, has pushed Farenthold’s proposal for years. GAO found that releasing settlement information “may decrease the asbestos-related litigation burden” on asbestos companies facing lawsuits from veterans and others who were exposed.

It would be damaging to veterans who have sued after being diagnosed with mesothelioma, a form of lung cancer that kills victims on average within one to two years, said Jason Johns, the national judge advocate for the Military Order of the Purple Heart, a veteran organization.

A dense paragraph of legal language in the bill requires trusts to turn over veterans’ settlement information -- now widely considered beyond the reach of the courts – and could enable industry attorneys to delay cases with demands for more information until veterans die, Johns said.

“It definitely provides an advantage for the defendants … the longer you can delay the case, the less likely that that veteran is going to be able to appear in court themselves,” he said.

The military is immune from asbestos litigation and the Department of Veterans Affairs occasionally awards service-connected health benefits for lung cancer and mesothelioma but the bar for documentation is high, according to Johns. Many asbestos claims now focus on suing manufacturing companies directly or tapping the trusts.

The AUSN and other opponents contend publishing the medical and work histories as well as the last four digits of Social Security numbers in publicly accessible electronic court system would be a bonanza for the criminals.

“There are people out there who will take every opportunity to manipulate that data in ways beyond our wildest dreams,” Hall said.