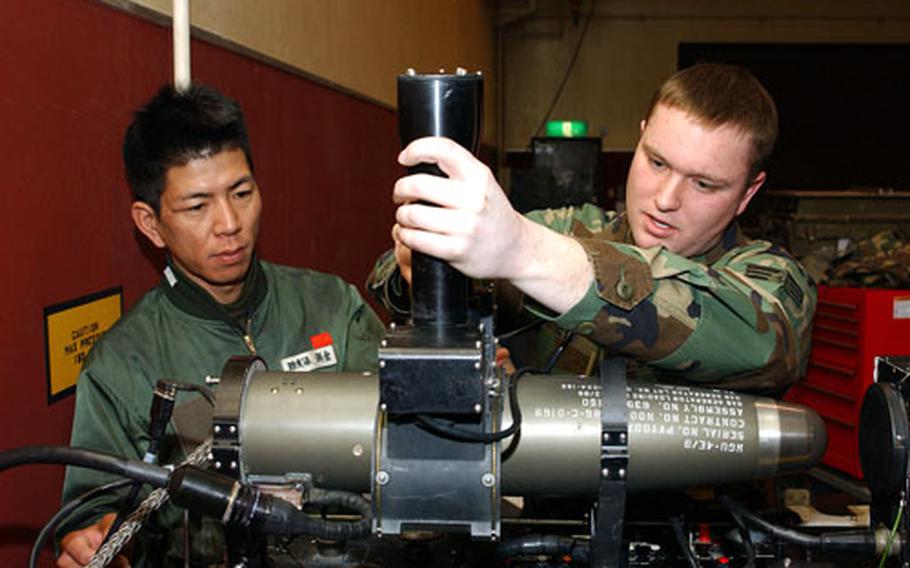 MISAWA AIR BASE, Japan &#8212; Take seven U.S. airmen and seven Japanese airmen, pair them up for eight days on the job, for meals and for leisure activities, and what happens &#8212; besides a lot of thumbing through a Japanese-English dictionary?

Blossoming friendships and a better understanding of different cultures and militaries, say the participants in Misawa&#8217;s Bilateral NCO Exchange.

&#8220;We&#8217;re just trying to build better relationships so if we did have to work together, it would be an easier transition,&#8221; said Master Sgt. Randy Wehrung, the 35th Fighter Wing medical inspections superintendent and organizer of the exchange between the U.S. Air Force and Japan Air Self-Defense Force.

In a few years Hyakuri Air Base&#8217;s airfield, located about 50 miles northeast of Tokyo, is to be jointly used by the U.S. and Japanese militaries for flight training, said Staff Sgt. Kanji Numajiri, a JASDF exchange participant.

Hyakuri is one of six Japanese military bases designated to host bilateral training and exercises in the future as part of U.S.-Japan force realignments.

An F-15 crew chief who speaks some English, Numajiri, 33, was matched with Staff Sgt. Andrew Fraser, 24, an F-16 crew chief at Misawa. The two also were teamed with seven Misawa airmen and spent about 10 days at Hyakuri in December for the first half of the bilateral swap.

Monday, as the Misawa portion was winding down, they shared observations and lessons learned. Communication was limited, with a Japanese-to-English translation device whipped out frequently, they said.

Fraser found it interesting to see the Japanese cultural values of teamwork and community embodied on the flight line.

Numajiri discovered that U.S. airmen are sticklers for safety. &#8220;Americans follow every step, very precise,&#8221; he said through a translator. &#8220;We sometimes skip some of the steps to make it easier.&#8221; On the job, he said he learned from Fraser how to marshal in an F-16 and how to complete the various safety inspections crew chiefs perform on the fighters.

Other observations: &#8220;This area of Japan is very famous for seafood, but Americans don&#8217;t eat seafood,&#8221; Numajiri said, as he and Fraser recalled the welcome reception at Hyakuri where Fraser passed up the raw seafood.