Bikers gather in Austria for rally 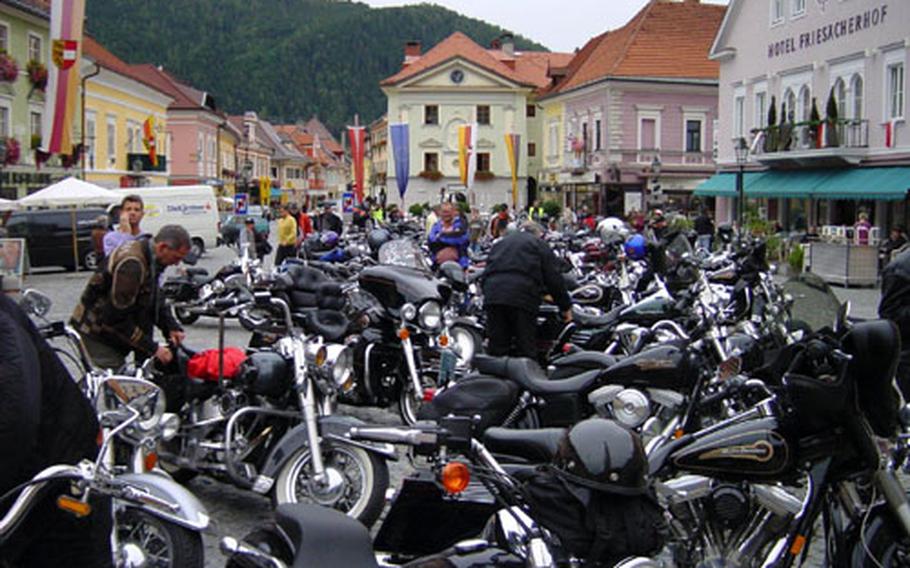 Dozens of bikes are lined up along a street in Faaker See, Austria, for the beginning of last year&#39;s European Bike Week. This year&#39;s event, which is expected to draw motorcycle riders from around the world, runs from Wednesday through Sunday. (Courtesy of Walter J. Heller)

American motorcycle enthusiasts are among thousands rumbling toward Austria for European Bike Week.

&#8220;This is probably one of the best rallies in the world,&#8221; said Walter J. Heller, assistant fire chief for Sigonella&#8217;s Fire and Emergency Services Department in Sicily. He and eight others with The Liars&#8217; Club are riding up to Faaker See for the event, which starts Wednesday and ends Sunday.

There are several contests and organized rides and venues spread around a lake and campgrounds.

One of the event&#8217;s sponsors, Harley Davidson, brings in its 2004 line of motorcycles and merchandise to drool over at Harley Village.

European Bike Week, a free event, began in 1998 for the 95th anniversary of Harley Davidson. Last year, about 35,000 bikes pulled into town. Heller said that while it&#8217;s primarily Hogs, there are several antique bikes and BMWs.

The big event Saturday is a 50-mile long parade.

At night, bands play around the venues and nearby towns.

The event attracts Americans from around Europe. The Rhein-Necker chapter in Germany usually has a showing of about 40 people, Heller said. About 25 to 30 motorcyclists are going with the Breakaway Motorcycle Club from Naples, Italy, said Petty Officer 1st Class Craig Thieman.

His group is dipping down to Croatia and Slovenia on the way to Faaker See, which is just north of Italy on the Slovenian border. Most of the Naples group is camping, and a van is taking two bikes in case someone breaks down.

Heller is planning to make the 1,000-mile trip in 24 hours for a competition called Saddlesore 1000.

For information on what is in the Faaker See area, including accommodations, go to: www.tiscover.at/at/guide/5,en,SCH1/objectId,RGN405at,curr,EUR,season,at2/home.html