Biggest toys in the sandbox 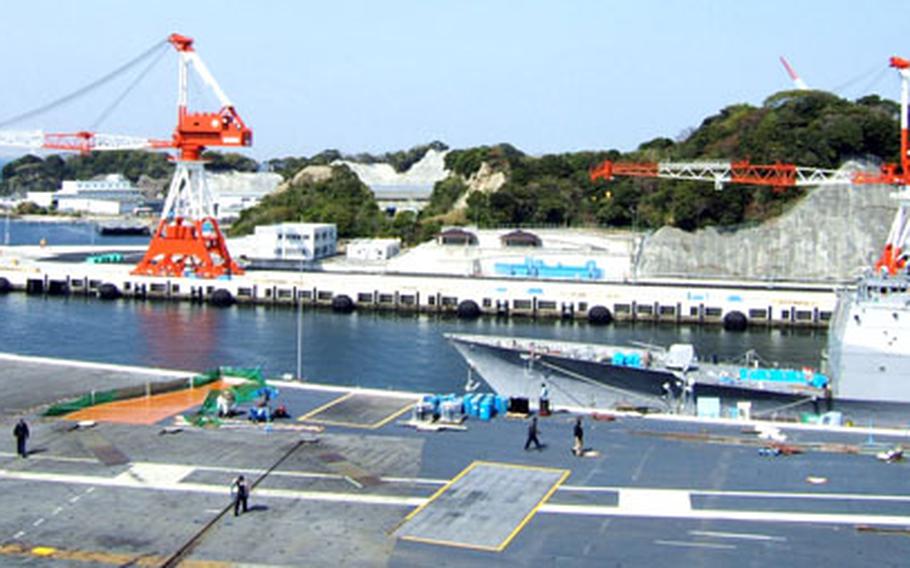 The heaviest lifters at Yokosuka Naval Base are cranes Yokozuna and Ozeki. They are named for the first- and second-place sumo wrestlers. (Courtesy of Ship Repair Facility, Japan Regional Maintenance Center)

The heaviest lifters at Yokosuka Naval Base are cranes Yokozuna and Ozeki. They are named for the first- and second-place sumo wrestlers. (Courtesy of Ship Repair Facility, Japan Regional Maintenance Center) Besides warships, the crane department has the "biggest toys" on Yokosuka Naval Base, jokes Lifting and Handling Department Director Thom Halo from the top of "TJ" the land crane, on Wednesday. (Allison Batdorff / S&S)

The names are both products of a cooperative spirit with the Japanese and a sense of humor, Halo said. All of the land crane operators are Japanese, as are most &#8212; 45 &#8212; of the recently created crane department&#8217;s 52 employees.

Much of the large crane operations were shut down in 1999, she said.

The crane&#8217;s primary role is to keep the fleet operationally ready. Unlike other shipyards, Yokosuka&#8217;s repair periods must be less than 180 days, as warships must be able to deploy quickly in an emergency.

And although the cranes don&#8217;t move the ships themselves, they are the &#8220;biggest in the sandbox,&#8221; except for the warships, Halo said. Each one costs about $3 million and was built by Sumitomo Heavy Industry of Japan.

The department recently won two major awards. It is also preparing to get two new land cranes in the next few years. This means another naming contest, said Halo.

The interest is indicative of his Japanese colleagues&#8217; respect for the machinery, hard work and sense of ownership, he said.