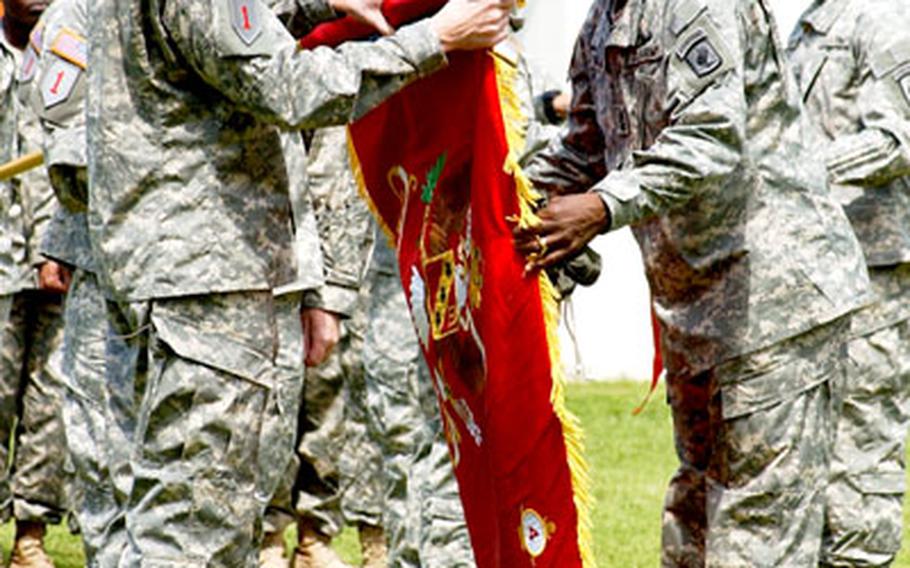 Lt. Col. Paul Daniels 4th Battalion, 319th Field Artillery Regiment commander, left, joins Master Sgt. Lorenzo Wallace in unfurling the colors of the regiment under the 173rd Airborne Brigade during a two-part ceremony at Warner Barracks in Bamberg on Thursday. Also during the ceremony, the Brigade Special Troops Battalion unveiled its own colors to signify its activation. (Stephen Baack / Courtesy of U.S. Army)

As the Big Red One&#8217;s move from W&#252;rzburg to Fort Riley, Kan., draws near, a number of smaller units attached to the division went through drastic changes last week, many involving Vicenza, Italy&#8217;s 173rd Airborne Brigade.

One of the units, the 101st Military Intelligence Battalion, cased its colors Friday in preparation to move with 1st ID headquarters to Kansas this summer. During a ceremony at W&#252;rzburg&#8217;s Leighton Barracks, Col. Keith Cooper, the 1st ID chief of staff, said most of the unit&#8217;s leadership will remain with the 101st. In a news release, Cooper also lauded the unit for helping one of its companies prepare for deployment while readying for the move back to the States. Company C, 101st MI Battalion is attached to 1st ID&#8217;s 2nd Brigade Combat Team out of Schweinfurt, Germany&#8217;s Conn Barracks.

For more than 10 years the Quarterhorse had called Schweinfurt home, but just as it said goodbye to all its heavy tracked vehicles earlier this year, it has welcomed the challenge of becoming a lighter, more streamlined airborne force.

&#8220;Over this past year the squadron has experienced significant change,&#8221; Lt. Col. Christopher Kolenda, 1-91 commander, said in a news release. &#8220;We have traded our helicopters, tanks and Bradleys for wheeled vehicles, rucksacks and parachutes. We have said farewell to our aviators and tankers, and welcomed to the family with open arms our brothers in the infantry and artillery.

Physical training took on a new level of intensity. Silver wings are displayed proudly on many of our chests. Ranger tabs are beginning to accent the patches on our left shoulders. Proficiency in dismounted skills and lethality with rifles and machine guns has never been finer.&#8221;

The unfurling of 91st Cavalry Regiment&#8217;s colors marked the first time they have flown since World War II.

&#8220;On the parade field today you see a direct connection between two distinct eras for these two units &#8212; many soldiers who were wearing the Big Red One shoulder sleeve insignia are now wearing the Sky Soldier patch on their left shoulders,&#8221; Brig. Gen. Peter J. Palmer, 1st ID assistant commander for support, said of the redesignated artillerymen, according to a release.