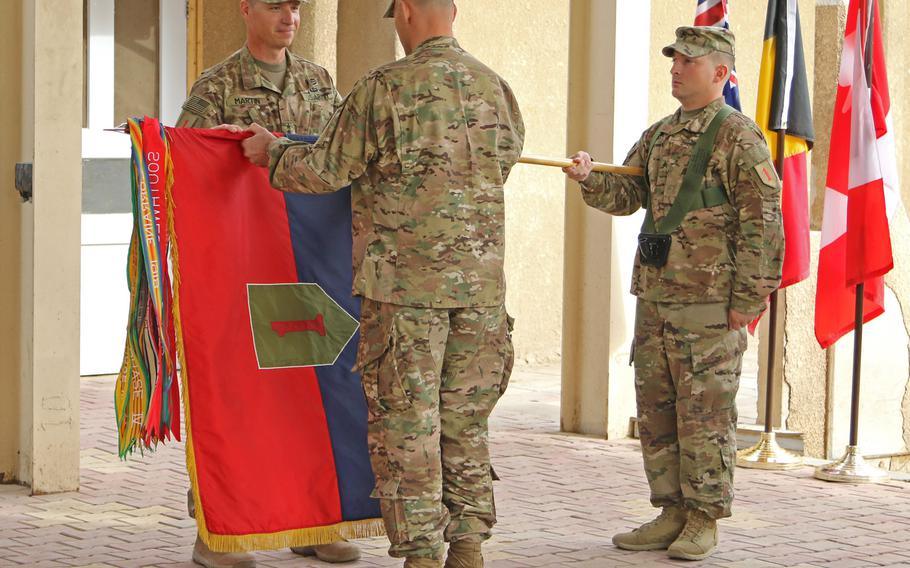 Maj. Gen. Joseph Martin, commanding general of 1st Infantry Division and the division's senior enlisted soldier, Command Sgt. Maj. Curt Cornelison, uncase the 'Big Red One' colors during the transfer of authority ceremony, Nov. 17, 2016, in Baghdad, Iraq. This is the second tour for the division in support of Operation Inherent Resolve. (U.S. Army)

Maj. Gen. Joseph Martin, commanding general of 1st Infantry Division and the division's senior enlisted soldier, Command Sgt. Maj. Curt Cornelison, uncase the 'Big Red One' colors during the transfer of authority ceremony, Nov. 17, 2016, in Baghdad, Iraq. This is the second tour for the division in support of Operation Inherent Resolve. (U.S. Army) 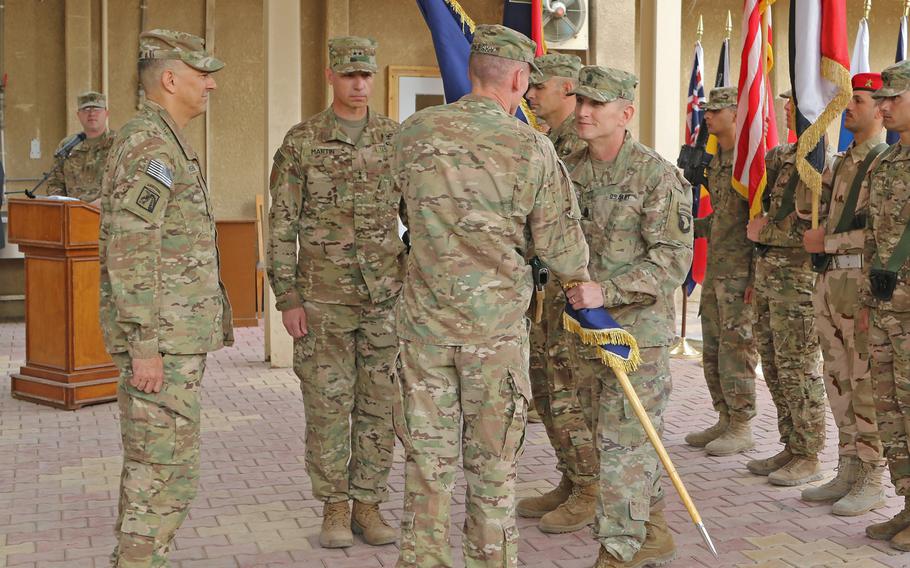 IRBIL, Iraq — The 1st Infantry Division assumed command of the multinational land component of the U.S.-led anti-Islamic State coalition on Thursday from the 101st Airborne Division, which had led it since March.

Townsend praised the 101st for its support of the Iraqi government’s efforts to defeat the Islamic State group with training, equipment, intelligence, advice and fire support, according to a news release. That support has helped the Iraqi army prepare for and begin the campaign to liberate Iraq’s second city of Mosul, “a battle now fully joined.”

The campaign began a month ago, when Iraqi and Kurdish forces, along with government-backed Shiite and Christian militias, advanced from several directions on the city of roughly 1 million, which the militants have held since 2014. Supported by thousands of airstrikes, the forces have reclaimed a number of surrounding villages and several outer neighborhoods inside the city.

Fighting has slowed as the battle has moved from mostly rural areas to built-up neighborhoods where Iraqi forces are fighting street-to-street against militants employing car bombs, improvised explosive devices and snipers.

As of Thursday, the coalition had destroyed more than 60 car bombs since the Mosul campaign began on Oct. 17, according to a Twitter post by Air Force Col. John L. Dorrian, spokesman for the Inherent Resolve operation.

Also onTwitter, Martin, the 1st Infantry Division commanding general, said the “Fighting First” was ready to take command and work with the rest of the coalition to defeat the militants.

It’s the division’s second tour in support of Inherent Resolve. The unit, which is the Army’s longest-tenured division and has been in service since its activation in 1917, was the first to lead the land component in 2014.

“We stand as one team!” Martin tweeted after assuming command of the land component from Volesky.

“Iraq will be liberated from the threat of terrorism and ISIL’s brutal and tyrannical methods,” Townsend said, using an alternative name for the Islamic State group. “The liberation of Mosul is on the horizon, and you will help our Iraqi brothers to reach it.”