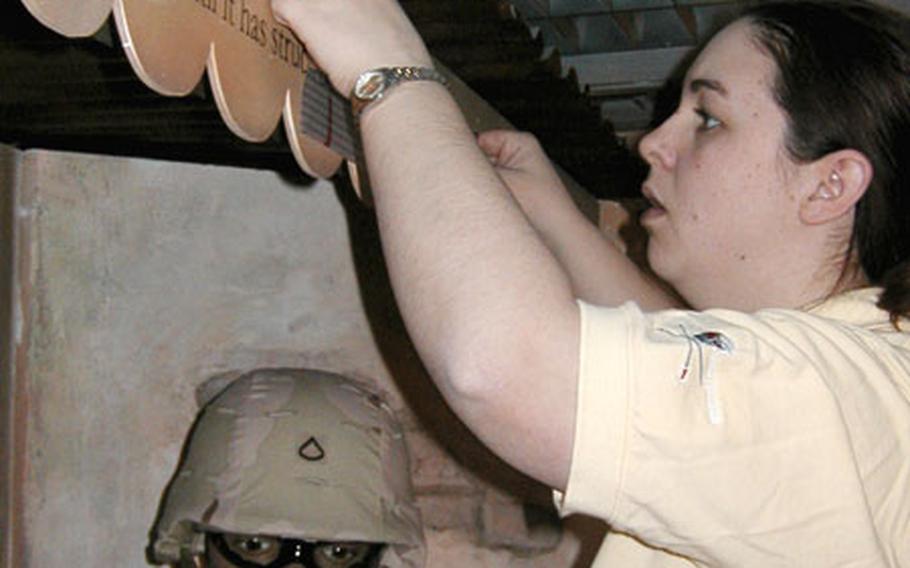 Shauna Holman works on the new Operation Iraqi Freedom display at the 1st Infantry Division Museum near the division headquarters in Würzburg, Germany. The $70,000 display will open this spring. (Steve Liewer / S&S)

Shauna Holman works on the new Operation Iraqi Freedom display at the 1st Infantry Division Museum near the division headquarters in Würzburg, Germany. The $70,000 display will open this spring. (Steve Liewer / S&S) 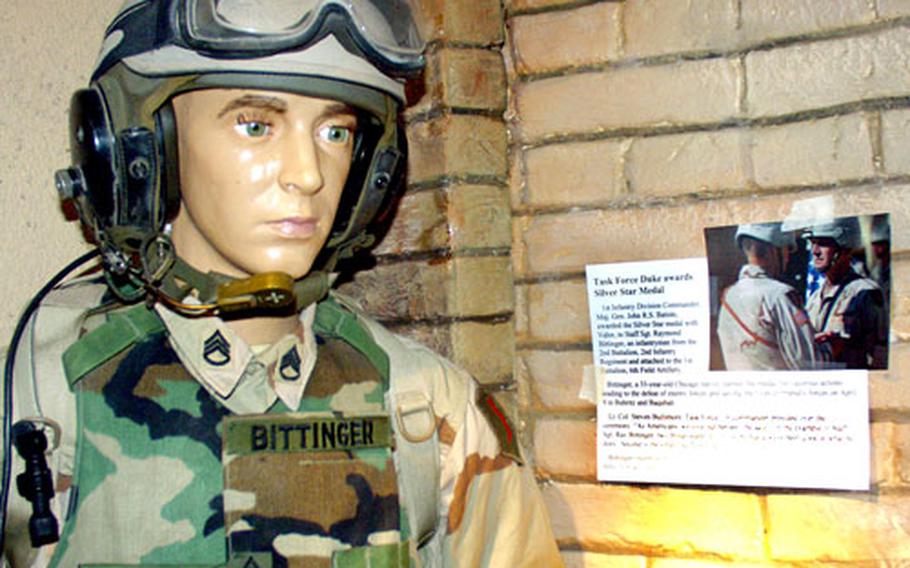 The new Operation Iraqi Freedom exhibit features a model of Staff Sgt. Raymond Bittinger of the 2nd Battalion, 2nd Infantry Regiment, one of two Big Red One soldiers awarded the Silver Star with Valor so far for actions during the past year. Bittinger, who is still in Iraq, donated his uniform and armored vest to the museum. (Steve Liewer / S&S)

W&#252;RZBURG, Germany &#8212; The 1st Infantry Division is not yet fully home from it&#8217;s yearlong tour in Iraq, and already its work there is being enshrined in history.

Gabriele Torony, the museum&#8217;s curator, said the new display carries forward a museum &#8220;story line&#8221; that stretches from the trenches of Cantigny, France, in World War I, through North Africa, Normandy, Vietnam, and the Persian Gulf to the valleys of Kosovo.

It opens with the facade of an armored Humvee that will hold a touch-screen computer, then lead visitors through an archway built to resemble the marble pillars at the 1st ID&#8217;s recent palace headquarters in Tikrit, Iraq.

The archway leads to an Iraqi street scene featuring an Iraqi policeman behind a faux concrete barricades, a U.S. soldier and Iraqi soldier jointly preparing to storm into a closed building, and a female 1st ID soldier talking to an Iraqi woman and child. The floor is gritty and sandlike, with embedded glass boxes displaying examples of the insurgents&#8217; homemade bombs.

In one corner is a tribute to the division&#8217;s heroes: the names of the 155 troops from the division and its attached units who died in Iraq. Standing in front of their names is a mannequin wearing an actual uniform belonging to Staff Sgt. Raymond Bittinger of the 2nd Battalion, 2nd Infantry Regiment, the division&#8217;s first winner of the Silver Star for his bravery during the April 9, 2004, Battle of Baqouba. He is still in Iraq.

Later, Torony said, a uniform from Sgt. Billy Barnes, the first Big Red One soldier to earn a Purple Heart in Iraq, will stand beside it.

Barbara Bower, who retired Jan. 31 as curator of the Army Transportation Museum at Fort Eustis, Va., has been sorting through thousands of digital images from the Internet, military photographers and individual soldiers. A few will be printed and mounted on the walls of the display, while hundreds more will run as part of video displays.

Torony said the display is about two-thirds complete, but no date has been set yet for the grand opening. She has been working with the division&#8217;s historian, Maj. Scott Znamenacek, who has been collecting artifacts for the display in Iraq. He&#8217;s now back home, she said, and this week will begin working full time to get it finished.