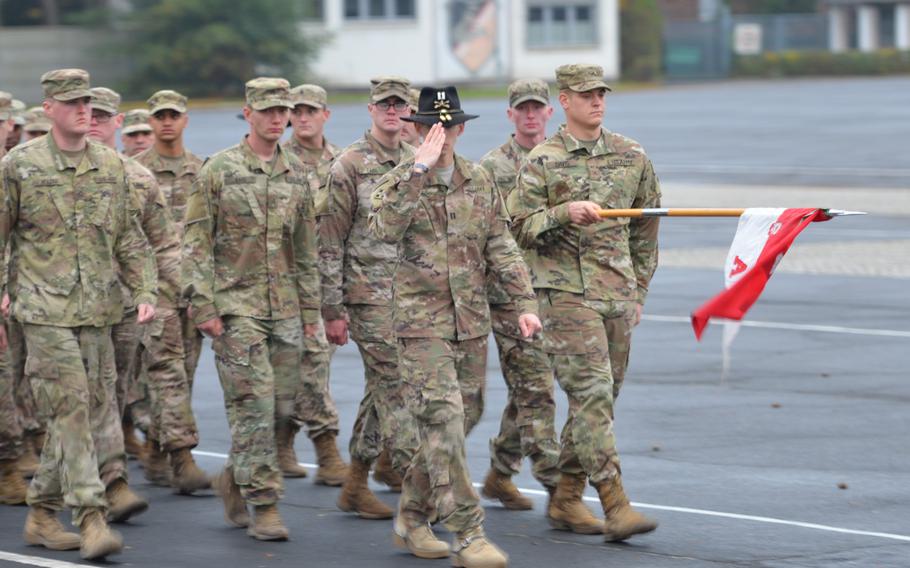 WIESBADEN, Germany — Interbattalion football games, history-focused staff rides and more frequent Skype sessions with families back home are the ways the U.S. Army’s lone tank brigade in Europe is coping with what is shaping up to be a cold and dark holiday season in the northeastern part of the Continent.

“It’s definitely tough for a soldier to be away from their families, and we’ve got quite a bit of first-time deployers as well going through that,” said Maj. Casey Dean, brigade operations office of 2nd Brigade, 1st Infantry Division.

With a pair of its battalions coming out of a major Germany-based training exercise, Allied Spirit VII, just in time for Thanksgiving, the Fort Riley, Kan.-based brigade be celebrating the holiday with a morning “Turkey Bowl” football game before settling in for a day of food and more football, he said.

“The cooks even special-ordered some wings and things like that to make them feel more at home and enjoy the games Thursday night,” he said.

The brigade is scattered throughout five countries on NATO’s eastern flank as part of U.S. Army Europe’s “heel-to-toe” regionally-aligned force. The concept, initiated after the 2014 Russian intervention in Crimea, calls for the uninterrupted deployment of an armored brigade and an aviation brigade, drawn from stateside installations and units for nine-month rotations in Eastern Europe.

It’s something different for many of these units, which have spent more than a decade going back and forth to Iraq or Afghanistan.

The long deployments in Europe, however, also put a strain on the force. A recent U.S. Army War College study, which compared the costs between rotational deployments and forward-stationing soldiers, found indications that rotational units are more likely to have lower reenlistment rates. So far, the evidence is largely anecdotal, but it is one factor in an ongoing Army debate about the pros and cons of the long troop rotations overseas.

Brigade leaders operating along NATO’s eastern flank are trying keep morale up by granting soldiers plenty of time to speak with families back home, saying that the communications networks are one of the benefits of being in Europe versus the more Spartan environments of Afghanistan or Iraq.

“There’s definitely opportunities for the soldiers to reach back home frequently and especially during this holiday season,” Dean said.

The unit will also try to break up the monotony with history-themed staff rides to European battlefields, including some the 100-year-old 1st Infantry Division fought in.

But downtime will be rare.

Col. David Gardner, brigade commander, said the best way for the unit to complete its mission of deterring Russian aggression is through consistent training.

“I think we can do that best by sustaining and demonstrating our mission readiness,” he said. “In fact, I think we have more time to dedicate to that training at all levels here (than in the U.S.).”

In January, the brigade will participate in the Allied Spirit VIII exercise in Germany, with several other joint exercises to follow. In May, the unit will serve as the major headquarters in the Combined Resolve X exercise, also in Germany.