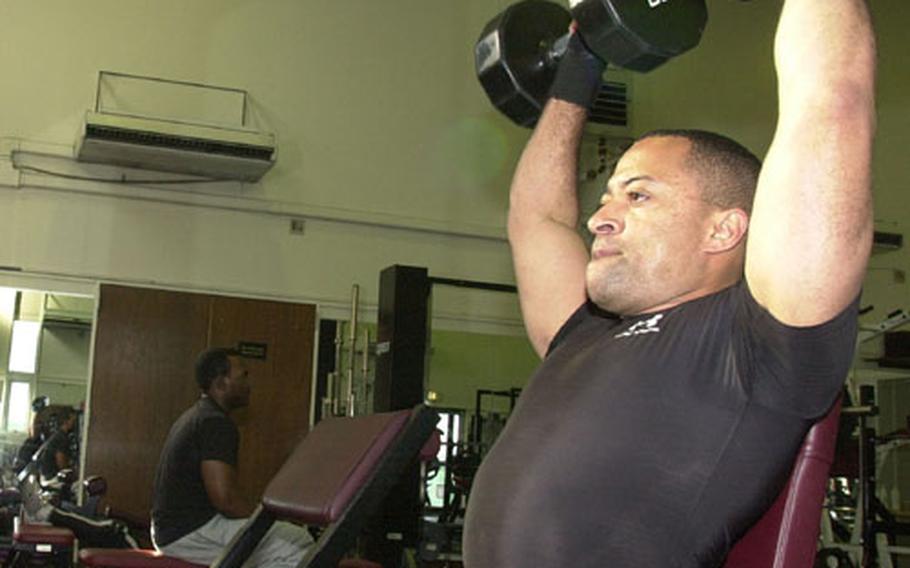 Tech. Sgt. Archie Taylor lifts weights at Yokota Air Base&#39;s Main Fitness Center on Thursday. Starting in April, the gym will close for about 18 months for a $3.4 million renovation project. A temporary gym will open in the interim at a location yet to be announced. (Jennifer H. Svan / S&S)

YOKOTA AIR BASE, Japan &#8212; The Main Fitness Center here is getting a much-needed face lift, and down the road, more space.

Starting in April, the 1976 gym will undergo $3.4 million in renovations that will expand the locker rooms and upgrade the heating, ventilation and air-conditioning systems. Also planned is a spinning room for indoor cyclists, a juice bar, pro shop, and possibly a child-care area, base officials said Thursday.

Fitness center director Patrick Coleman said the renovated gym will have space for a child-care room, but those plans are tentative.

The project is expected to take between a year and 18 months to complete. The fitness center will be closed and equipment moved to an undetermined location during the interim. Wing leadership is considering different options, said Coleman, declining to name what those were. &#8220;It will be announced pretty soon,&#8221; he said.

That will likely take some creative planning, such as putting hoops up in a hangar for an intramural basketball game or asking the Youth Center or base schools for help, he said. &#8220;We&#8217;re looking at several solutions.&#8221;

The project is funded through Pacific Air Forces, said 2nd Lt. Lincoln Coleman, chief of Japan Facilities Improvement Program for 374th Civil Engineer Squadron. The base got behind the project and PACAF will fund it with money left over at the end of last fiscal year, he said.

Soon after the new and improved gym opens, construction will begin on a $9 million addition funded through the Japan Facilities Improvement Program. The tentative start date is October 2005, the lieutenant said. The building will be physically separate from the fitness center &#8212; since JFIP funding can be used to construct new facilities only &#8212; but Yokota plans to connect the two, the lieutenant said.

The 25,000-square-foot building will increase the fitness center&#8217;s size by about 70 percent, adding a basketball court, a large cardio and weight room and an aerobics room. The Health and Wellness Center will also relocate to the facility; its current site, along with adjacent buildings, will be torn down to make way for gym parking spaces. The entire project is expected to take from one to two years to complete.

Coleman, the fitness center director, said both the renovations and addition are much needed projects: The gym recently upgraded its equipment and meets current Air Force standards, but the center isn&#8217;t big enough to accommodate the current base population. And with the new Air Force fitness standards, including a 1.5-mile run, effective Jan. 1, 2004, the gym is crowded as ever, Coleman said.

One patron working out in the gym Thursday said he was happy with the weight rooms, but a larger cardio area was needed. &#8220;Since we went to the mile-and-a-half run, you see more people upstairs doing cardio,&#8221; said Tech. Sgt. Archie Taylor.