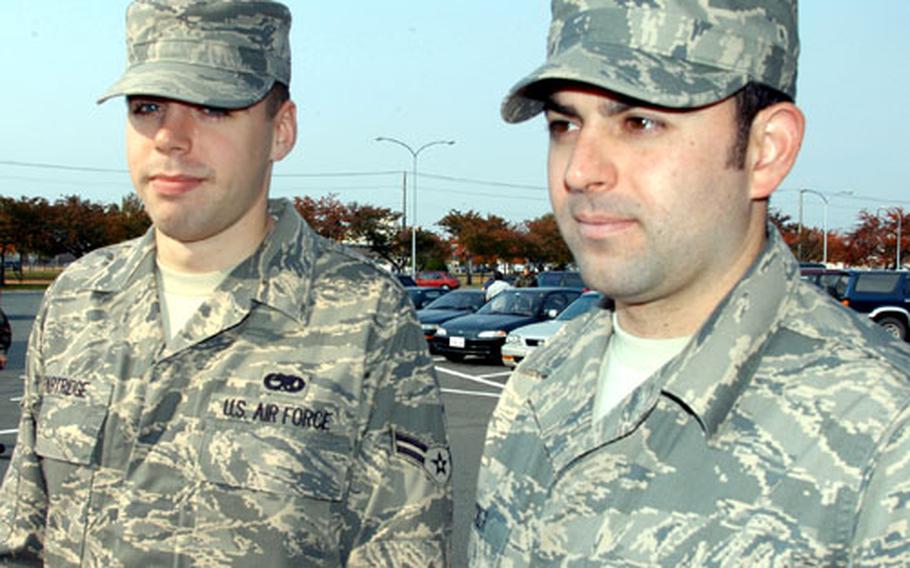 But Decker and Partridge bought their ABUs online and have been wearing the new garb for about a month. They have no complaints.

Military clothing retailers in Japan say the new uniform is in huge demand.

Airmen are asking in droves about the ABU, said Ernest Dill, Army and Air Force Exchange Service military clothing sales store manager at Yokota Air Base, Japan. &#8220;Every day. On the phone, in person, people calling from other bases.&#8221;

But the uniform has yet to hit AAFES military clothing stores on Pacific bases.

Air Force officials, queried by Stars and Stripes, did not say when stores in the region could expect their first shipment of the new garment.

&#8220;As supply becomes increasingly available, more ABUs will be distributed to military clothing sales stores at active-duty bases around the world (to include PACAF),&#8221; Maj. Brad Head, of the Air Force Uniforms and Recognition Branch, said in an e-mail to Stars and Stripes.

The ABU is being issued first to airmen deploying to Iraq, Afghanistan and Kuwait, Head said, as well as to new recruits at basic military training.

With its soft earth tones of gray, green, tan and blue, the new ABU looks similar to the Army combat uniform. The pattern is designed loosely around the Vietnam-era tiger stripe.

One of the uniform&#8217;s appealing qualities is its wash-and-wear fabric, a 50-50 nylon-cotton blend with a permanent crease. No starching or ironing is needed.

Dill advises airmen to stock up on accessories now. When the Army&#8217;s new uniform came out in January 2006, accessories were on back order for six months after stores ran out, he said.

AF cautions airmen not to buy ABUs on the Web

With the Air Force&#8217;s new airman battle uniform (ABU) still unavailable in overseas Pacific military clothing stores, some airmen are buying it online from several sites that offer it.

The Air Force doesn&#8217;t prohibit such purchases but highly discourages it, Air Force officials said. Quality can&#8217;t be guaranteed, and the service can&#8217;t help buyers in any recourse against the supplier if the uniform fails to meet standards.

Some of the sites are authorized vendors for the uniform, said Maj. Brad Head of the Air Force Uniforms and Recognition Branch, in an e-mail to Stars and Stripes, but they are also selling ABUs made outside the United States.

Federal law requires uniforms bought with government funds to be made in the United States, Head noted.

However, he said airmen can still buy these uniforms with personal money. But &#8220;they run the risk that uniforms may not meet all the required specifications such as Near Infrared,&#8221; he added.

&#8220;The Air Force highly discourages personnel from purchasing their ABUs from these sources,&#8221; Head said, noting the mandatory wear date is not until November 2011.