Big crowds get Oktoberfest's 200th anniversary off to good start 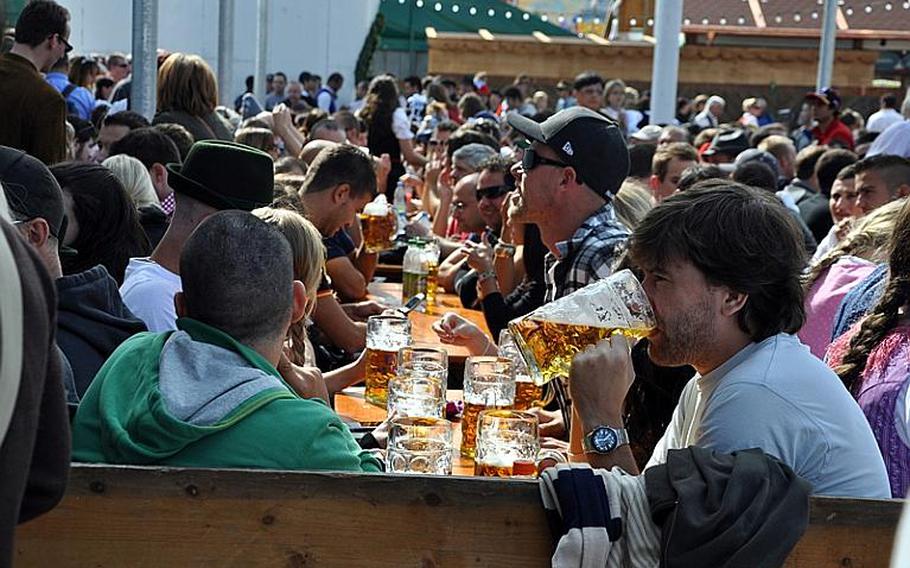 Buy Photo
Oktoberfest revelers enjoy their first beers minutes after Saturday's opening ceremony for Munich's 200th anniversary of Oktoberfest. This year is actually the 177th Oktoberfest, but it has been a tradition since 1810 with cancellations for disease epidemics, war and other events. (Warren Peace/Stars and Stripes)

Buy Photo
Oktoberfest revelers enjoy their first beers minutes after Saturday's opening ceremony for Munich's 200th anniversary of Oktoberfest. This year is actually the 177th Oktoberfest, but it has been a tradition since 1810 with cancellations for disease epidemics, war and other events. (Warren Peace/Stars and Stripes) 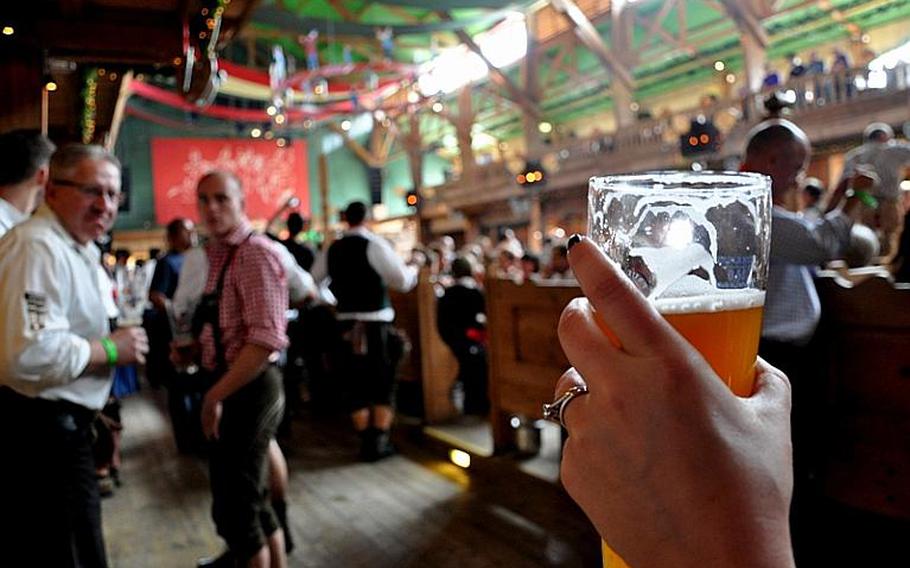 Buy Photo
Fest goers turn to look at Mandy Lyman as she raises her first glass of beer and shouts 'Prost,' German for 'cheers,' on opening day of the 2010 Oktoberfest in Munich on Saturday. She and husband Matt, a Marine sergeant stationed in Stuttgart, Germany, are first-timers at Oktoberfest and said they are happy they didn't miss this event. 'It's amazing to see all these strangers get along so well,' she said. 'Beer rocks.' (Warren Peace/Stars and Stripes) 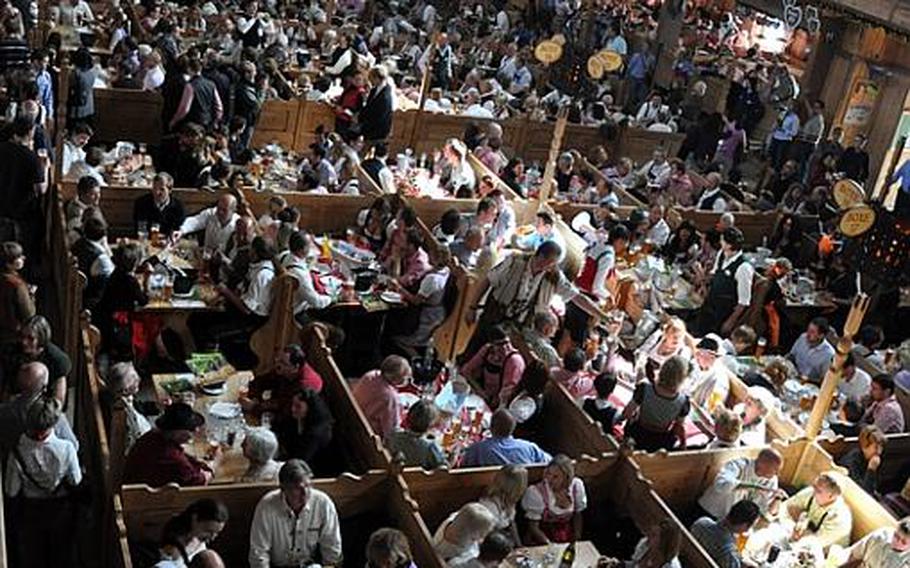 Buy Photo
Hundreds of beer drinkers fill the Nymphenburg SekT tent moments after the grand mayor of Munich tapped the first keg in another tent, marking the start of the annual Oktoberfest in Munich on Saturday. (Warren Peace/Stars and Stripes) 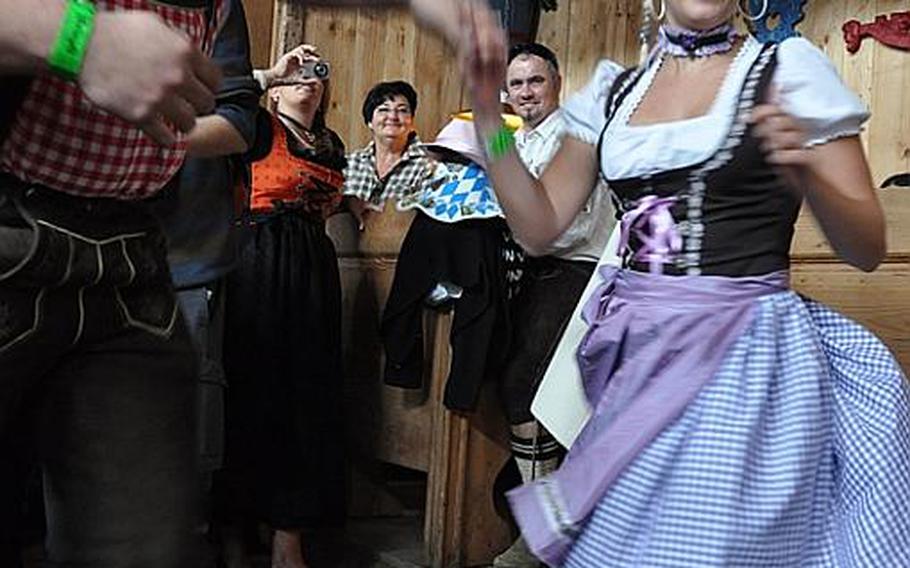 Buy Photo
Festival goes dance to live music inside the Nymphenburg SekT tent on the opening day of the 2010 Oktoberfest in Munich on Saturday. The tent was full but standing room was available for people who didn't reserve a table or arrive early enough. (Warren Peace/Stars and Stripes)

MUNICH, Germany &mdash; Two hundred years after Crown Prince Ludwig of Bavaria invited Munich&rsquo;s residents to celebrate his marriage, the sun shone down on another group of festival goers Saturday as Munich&rsquo;s lord mayor tapped the first keg of beer to begin what has become the annual Oktoberfest party.

The sun didn&rsquo;t last long. Within a few hours after the official noon start, clouds blanketed the sky, a chill fell on the fest and people started donning jackets or retreating into tents to take advantage of the trapped body heat inside.

But the drop in temperatures didn&rsquo;t lower spirits, as the international crowd sang along to traditional and more-modern songs inside the tents or swarmed the carnival rides on the Theresienweise fairgrounds. And everywhere dirndl-clad women and lederhosen-wearing men eyed one another.

Mandy Lyman, a first-time Oktoberfest attendee who came to the party with her husband, Matt, said she was in awe of the fest despite being told it wouldn&rsquo;t be everything it is cracked up to be.

&ldquo;So many people told me not to come,&rdquo; the Sneads Ferry, N.C., native said. &ldquo;It&rsquo;ll be too crowded and full of tourist, they said.

&ldquo;But, I love it. I have met people from Australia, England, Switzerland and of course Germany. Anyone living in Germany needs to come at least once. It is like celebrating New Year&rsquo;s in Times Square.&rdquo;

Her husband, a Marine sergeant based in Stuttgart, was impressed with the fest as well.

&ldquo;This is way more impressive than I thought it was going to be,&rdquo; he said. &ldquo;It&rsquo;s a beautiful blend of tradition and beer. It&rsquo;s great to be able to find this many people from all over the world coming together to enjoy German culture.&rdquo;

One tradition that changed this year is that smoking is not permitted inside the tents. On Aug. 1, Munich officials passed a law prohibiting smoking indoors, but included a clause allowing smoking indoors at Oktoberfest. Festival officials and tent managers banned it anyway, saying it was the right thing to do.

&ldquo;We haven&rsquo;t had any complaints about the new smoking rules,&rdquo; said ChristophGeiger, a festival official. &ldquo;It&rsquo;s been going for hours now and no one minds. They just step outside and return to the beers when they&rsquo;re finished.&rdquo;

The party started early, with people lining up outside the tents long before any beer was served.

&ldquo;I have been waiting outside the first-come, first-serve tent since 7:15 since I don&rsquo;t have a reserved table in a tent,&rdquo; Thilo Geiger, a Stuttgart native and an officer in the German military, said earlier in the day. &ldquo;They don&rsquo;t open the tents for two hours and they don&rsquo;t start serving beer for five and there are already more people here than there are seats inside.&rdquo;

This year&rsquo;s Oktoberfest runs until Oct. 4, one day longer than normal. Officials, who are expecting record crowds, extended the party to accommodate late-comers during the 200th anniversary.

Also as part of the anniversary, Munich is holding daily horse races, which were part of the original 1810 celebration, and tents have been set up outside the main area as temporary museums with artifacts from past festivals, with such pieces as old kegs and beer steins.