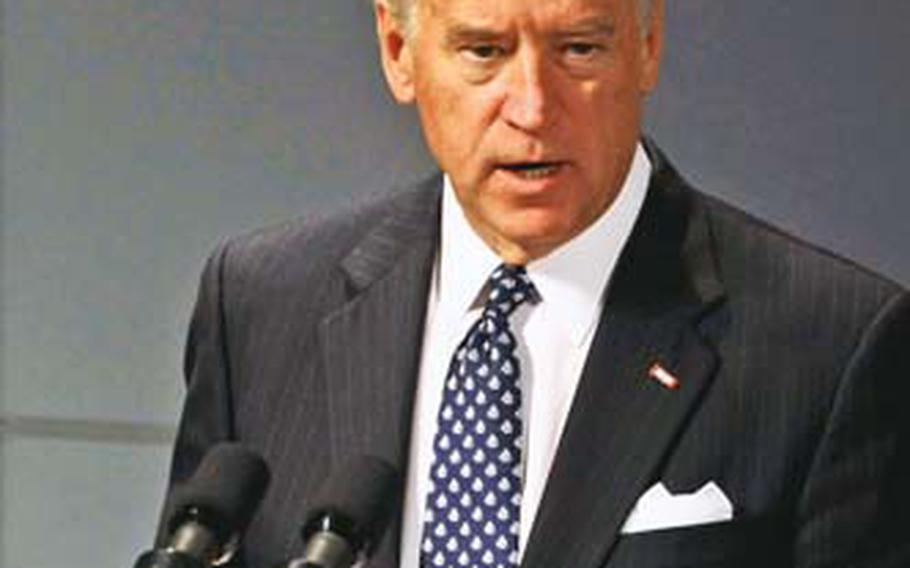 MUNICH, Germany &#8212; Vice President Joe Biden on Saturday vowed that the United States will emphasize diplomacy over military force and seek to set a new tone with its European partners.

But, he said, it also will be asking more of its allies.

"America will do more; that&#8217;s the good news," Biden told French President Nicolas Sarkozy, German Chancellor Angela Merkel and others attending the 45th Munich Security Conference. "The bad news is America will ask more of our partners as well."

Some 300 government officials, defense policy experts and heads of state have gathered in Munich for a weekend of consultations on a host of thorny security matters. Nuclear proliferation, cybercrime, the 8-year-old war in Afghanistan and Iran&#8217;s nuclear program are all on the table.

During a wide-ranging keynote speech, Biden talked about everything from a commitment to fight global warming to the need for help from allies in accepting prisoners from Guantanamo Bay detention vamp, which President Barack Obama has ordered closed within a year.

The U.S. is perhaps seeking the most help in Afghanistan, where security conditions continue to deteriorate in the face of a resurgent Taliban. Obama has pledged to send 30,000 more troops to the country.

While Biden did not single out any nation, he said some allies need to find a way to overcome their "unwillingness to use force when all else fails."

Earlier in the day, NATO Secretary-General Jaap de Hoop Scheffer was more blunt about the reluctance of some NATO partners to provide more help in Afghanistan.

"I&#8217;m frankly concerned when I hear the United States is planning a major commitment for Afghanistan, but other allies are already ruling out doing more," he said.

Biden spoke in gentler terms about the challenges ahead.

"The result must be a comprehensive strategy for which we all take responsibility that brings together our civilian and military resources that prevents a terrorist safe haven and that helps Afghans develop the capacity to secure their own future," he said.

Biden offered up few specifics about what the Obama administration was seeking in terms of help from its NATO partners in Afghanistan and elsewhere.

However, he said that in the case of Russia, the Obama administration will seek to reverse "a dangerous drift" in relations between the two countries.

One factor that has resulted in a souring between the former Cold War foes is a plan pushed by former President George W. Bush that called for interceptor missiles to be set up in Poland and a radar station in the Czech Republic. It&#8217;s not clear what the fate of the program will be under Obama.

Biden is scheduled for talks Sunday with Russian Deputy Prime Minister Sergey Ivanov, who addressed the missile defense issue at the opening of the conference on Friday.

"We are confident that the creation and deployment of missile defenses of various types affect directly regional and international security," Ivanov said. "If one does it unilaterally without due respect of the interests of strategic stability of other parties involved &#8230; the situation cannot but result in increased tension."

Regarding Iran and its nuclear program, the U.S. will seek assistance from allies as it seeks to apply pressure.

"We are willing to talk to Iran, and to offer a very clear choice: continue down your current course and there will be pressure and isolation; abandon your illicit nuclear program and support for terrorism and there will be meaningful incentives," Biden said.

In a departure from the Bush administration&#8217;s go-it-alone posture, Biden spoke repeatedly of the need for collaboration.

"We will engage. We will listen. We will consult. America needs the world, just as I believe the world needs America," he said.

But he didn&#8217;t shy away from talking about the role of military force.