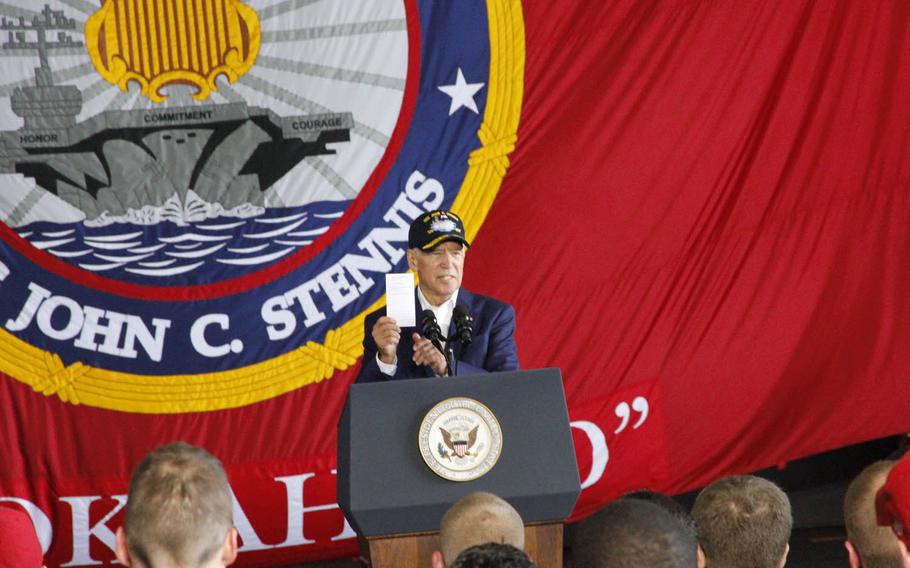 Buy Photo
Vice President Joe Biden holds up the notebook in which he keeps a daily total of killed and wounded American troops in Afghanistan and Iraq during a meeting aboard the USS John C. Stennis, July 14, 2016, while the ship was particpating in the Rim of the Pacific exercise near Hawaii. (Wyatt Olson/Stars and Stripes)

Buy Photo
Vice President Joe Biden holds up the notebook in which he keeps a daily total of killed and wounded American troops in Afghanistan and Iraq during a meeting aboard the USS John C. Stennis, July 14, 2016, while the ship was particpating in the Rim of the Pacific exercise near Hawaii. (Wyatt Olson/Stars and Stripes) 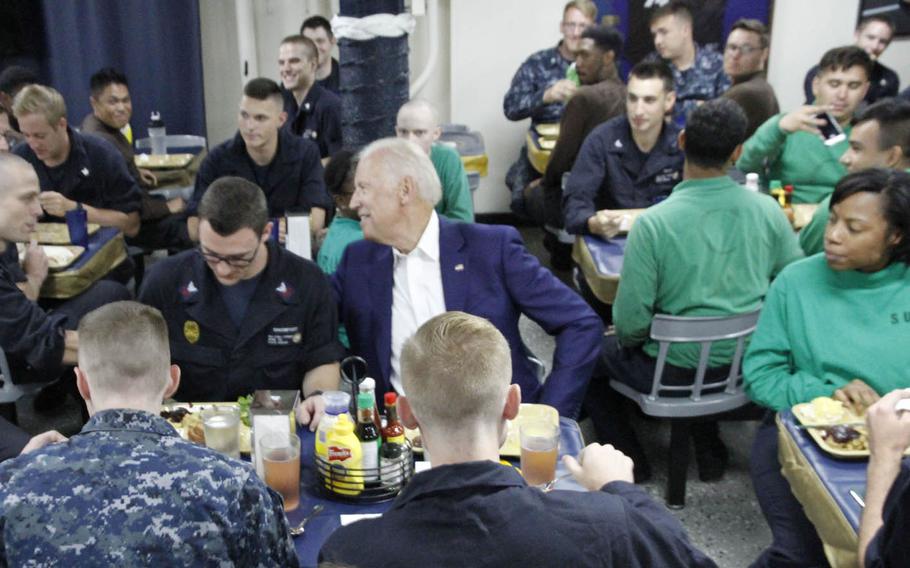 Buy Photo
Vice President Joe Biden grabs a quick lunch with some crew members of the USS John C. Stennis while at sea about 140 miles south of Oahu, Hawaii, July 14, 2016. Biden held an all-hands call for the Stennis crew, which is now involved in the Rim of the Pacific exercise. (Wyatt Olson/Stars and Stripes) 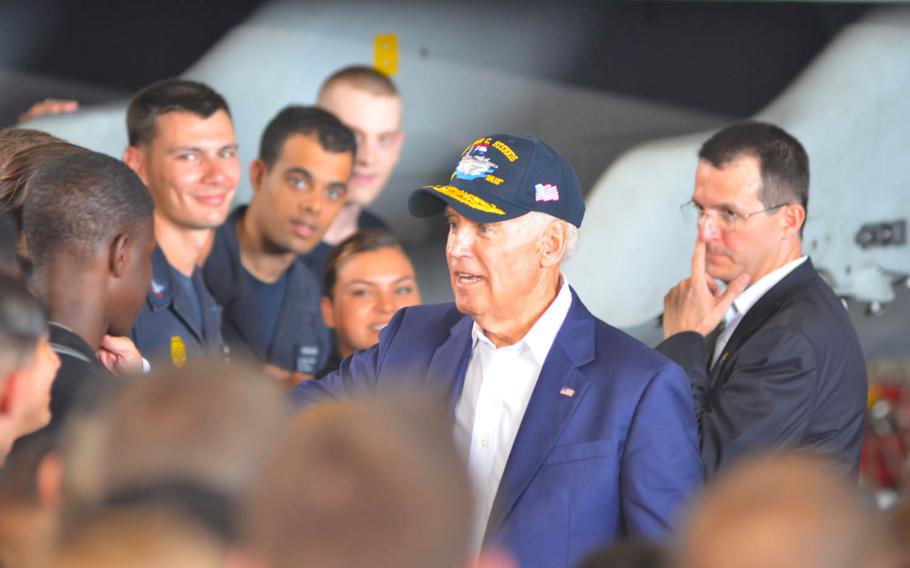 Buy Photo
Flight deck crew members of the USS John C. Stennis greet Vice President Joe Biden after he arrived on the aircraft carrier via an Osprey aircraft on July 14, 2016. During an all-hands call to the crew later, Biden said he was there primarily to thank them for their service. (Wyatt Olson/Stars and Stripes) 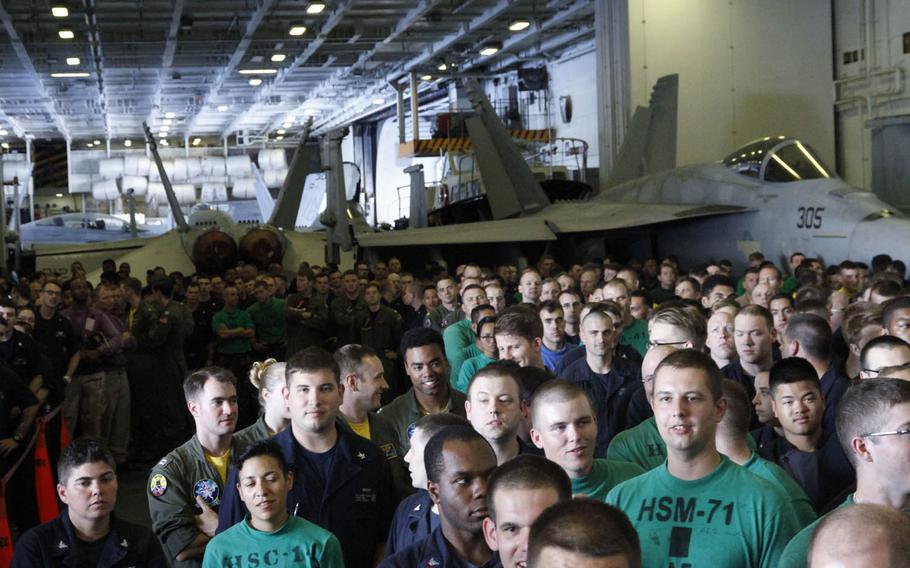 ABOARD THE USS JOHN C. STENNIS — Vice President Joe Biden told the crew of the USS John C. Stennis aircraft carrier Thursday that the region and world depend on them to continue enforcing international norms and laws in the Pacific to maintain stability and prosperity.

“I’m told this is the first time an American vice president has ever been aboard one of our carriers at sea in the Western Pacific,” Biden told hundreds of crew members gathered in a hangar. “But I guarantee you, it will not be the last. We’re going to be present in the region, and we’re going to be active in the region — as long as all of you are alive.”

The Stennis is among the many Navy ships in Hawaii for the biennial Rim of the Pacific exercise, in which 26 nations are participating. The carrier spent some of its past six months of deployment in the South China Sea, where tensions have risen over territorial disputes between China and several nations.

Biden arrived on the Stennis via an Osprey in the afternoon after spending the morning in Honolulu with his counterparts from Japan and South Korea discussing their trilateral partnership in the region in relation to recent North Korean provocations and tensions in the South China Sea.

Biden told reporters that when the three nations stand united on such issues as human rights or address threats, such as climate change or the spread of communicable diseases, “we amplify our input.”

“There’s power in unity,” he said. “It shows all the other nations of the region that they don’t stand alone.”

Biden said there is no question that “our trilateral capacity … is now stronger than ever.”

“But advancing international norms involves more than just deterring threats,” he said. “It’s about upholding the liberal order that is critical to the success of all our nations.”

There are certain international “rules of the road” that cannot be allowed to fall to the wayside, he said.

“In the wake of this week’s arbitral tribunal ruling on the South China Sea, it’s essential that we continue to express our mutual support for the rule of law,” he said. “You are either going to abide by international standards or not. Don’t pretend.”

Earlier this week, an international tribunal in The Hague largely ruled against China’s sweeping claims of sovereignty over most of the South China Sea. The Philippines had filed the arbitration case.

The decision declared that, according to international law of the sea, the small reefs and land features claimed by China were not actually islands and therefore don’t merit exclusision zones.

Biden told the Stennis crew that during their deployment in the Pacific “all of you have been a concrete reminder of America’s commitment to our allies and everything we bring to the table.”

He referred to the unity among the U.S., South Korea and Japan in 2013 when China declared an air defense identification zone over certain islands in the East China Sea where both Beijing and Tokyo claim sovereignty.

Biden said he was in a meeting with China President Xi Jinping afterward, and the Chinese president asked: “What do you expect me to do?”

Biden said he didn’t expect China would do much, but the U.S. and its allies would.

“Some of you pilots have heard threats and warnings as you fly through unofficially but nonetheless a declared Chinese air defense space,” he said. “And you said, ‘Like hell. This is open space. This is all of our air space.’”

In an emotion-filled moment of his speech, Biden reached for a scheduling notebook in his pocket and waved in the air.

“Every single day I have my staff contact the Defense Department at five o’clock in the morning,” he said. “I carry a schedule with me, but there’s a black box in this schedule every single, solitary day that I’m around. And in it says, U.S. daily troop update — U.S. troops who have died in Afghanistan and Iraq.

“It’s incredibly important to know exactly how many! It drives me crazy when I hear people say, ‘over 6,000.’ “

Reading from the scheduler, he said, “It’s 6,746, because every one of those fallen angels left an entire community behind, left a family behind and made a gigantic, gigantic sacrifice for America.”

Biden now heads to Australia and New Zealand for a week for further discussions about security cooperation.