Biden offers reassurances of US commitment to Asia 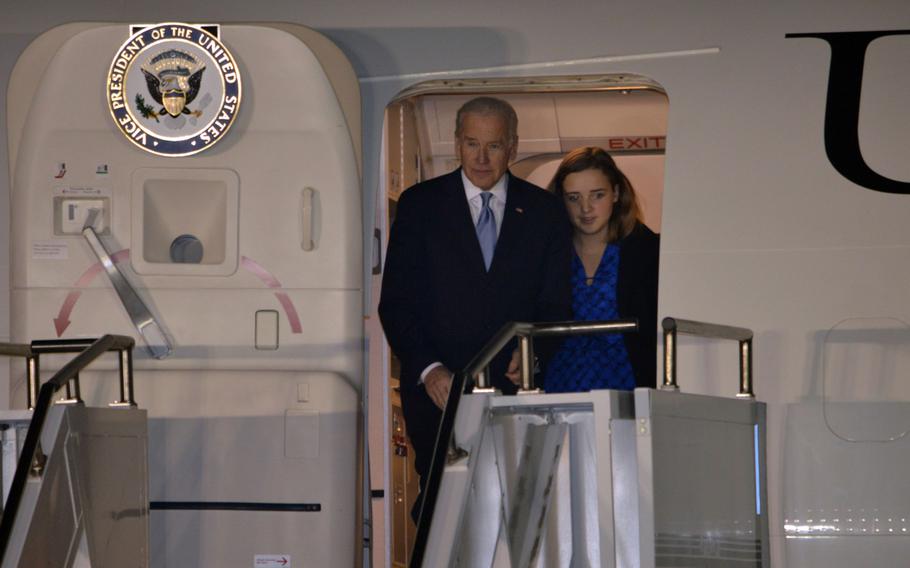 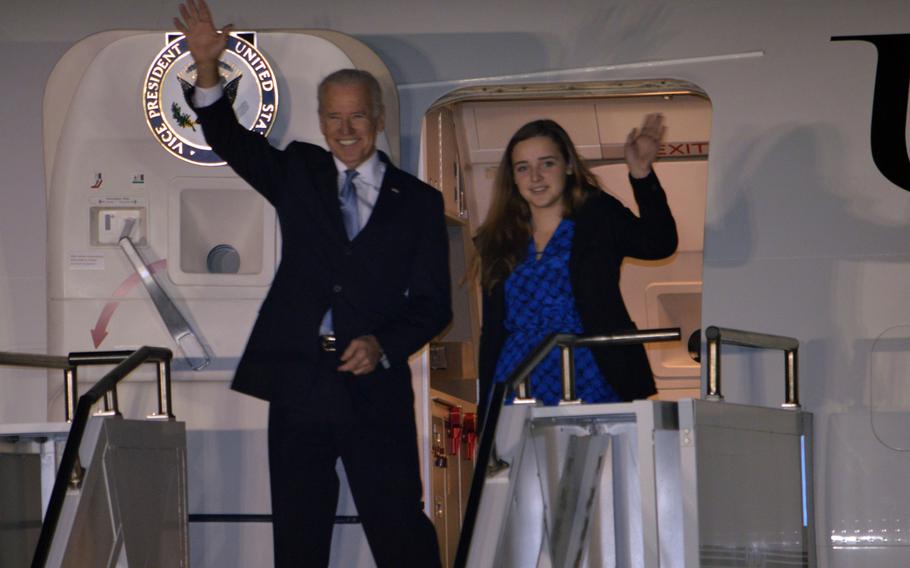 Buy Photo
U.S. Vice President Joe Biden waves to South Korean media on arrival at Osan Air Base, South Korea, on Dec. 5, 2013. Biden was scheduled to meet with the South Korean president during his visit. (Armando R. Limon/Stars and Stripes) SEOUL — U.S. Vice President Joe Biden offered reassurances Friday of America’s commitment to South Korea and the rest of Asia, saying “no one should underestimate or question our staying power.”

“The United States is back,” he said. “We have rebounded like you have and others from the worldwide recession. We are ready and we are anxious to compete.”

Speaking at Seoul’s prestigious Yonsei University, Biden called the military alliance between Washington and Seoul “the linchpin for peace and security in the Asian-Pacific,” pointing out that U.S. troops have been stationed in South Korea for six decades since Korean War ended.

“To this day, the American people still support, to the tune of billions of dollars, without complaint, 28,500 of our sons and daughters standing side by side with their Korean brothers and sisters, standing watch without complaint,” he said.

“So you might not be surprised I’m somewhat incredulous when people question our staying power, question whether America means what it says and does what it says,” he said.

Biden’s speech capped a weeklong trip to Asia that included stops in Tokyo and Beijing. It came against a backdrop of sharply rising tensions following China’s proclamation last month of an air defense zone that overlaps areas claimed by South Korea and Japan.

The vice president said he was direct with China about American’s disagreement with the defense zone, telling the country’s leaders it would have no effect on American operations and urging Beijing not to take actions that risk escalation.

“The possibility of miscalculation, a mistake, is real and could have profound consequences for your generation,” he told the crowd of mostly South Korean university students, adding that countries across the region must develop “an understanding of what constitutes acceptable behavior” that does not include intimidation or coercion.

Biden also called for North Korea to denuclearize and return to six-party talks, declaring that the international community would not accept or tolerate a nuclear-armed Pyongyang.

“Let there be no doubt — the United States of America is committed to do what it takes to defend our allies and ourselves against North Korean aggression, period,” he said.

Biden avoided direct mention of growing tensions between South Korea and Japan over Tokyo’s efforts to strengthen its self-defense forces, a move seen by Seoul as a return to its militaristic past.

Historical grievances stemming from Japan’s colonial occupation of the Korean peninsula still cause deep resentment in the South, and along with a dispute over ownership of two islets, are straining cooperation between the two key U.S. allies.

However, the vice president said the U.S. is trying to promote better cooperation among Washington, Seoul and Tokyo. He noted that South Korean president Park Geun-hye agreed during a meeting earlier in the day that the three countries need to work together more closely.

Biden also praised Nelson Mandela, the former South African president who died Thursday, as someone who “changed the world and the way we see it.”

He recounted his first visit with Mandela in Washington after his release from prison. Biden asked why he wasn’t resentful or hateful after being kept in solitary confinement during the most productive years of his life.

Mandela replied that his jailors were just doing their job and had become his good friends, to the point that they lined up to shake his hand and wish him well when he left prison.

“He had wisdom, compassion and courage, and maybe the hardest thing to possess – forgiveness,” Biden said.