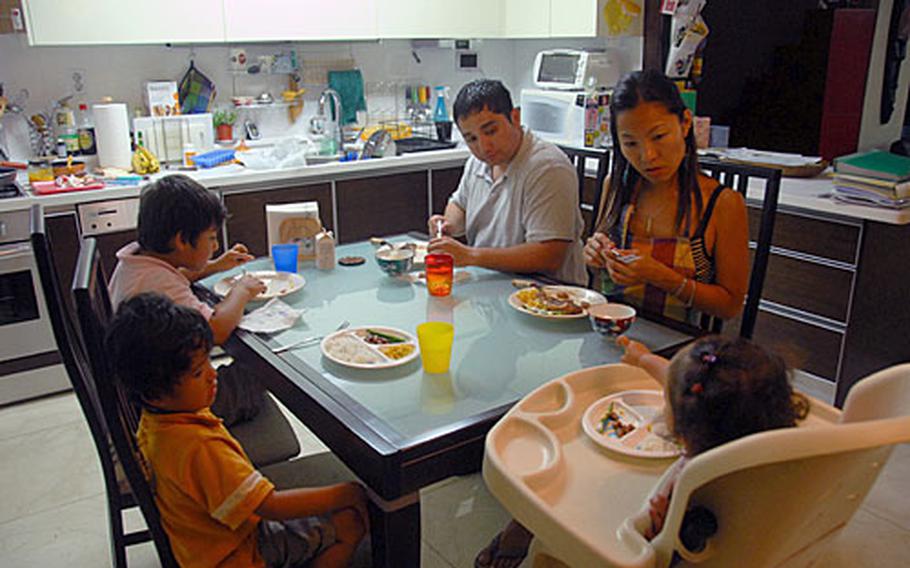 Jeff and Ko Waye, who married while Jeff was in the U.S. Army, eat dinner with their family. Clockwise is their daughter Jun, 2, son Riku, 4, and son Hiro, 6. Jeff is American and Ko is Japanese. (Ashley Rowland / S&S)

They met by accident when Ko called a friend&#8217;s house in Misawa, Japan, and Jeff answered the phone.

They became friends, started dating and, after a two-year courtship that spanned three countries &#8212; Japan, South Korea and the United States &#8212; they married by signing papers in a Japanese clerk&#8217;s office. No frills, no ceremony, no wedding dress.

Jeff took orders to Fort Lewis, Wash., so Ko would be an eight-hour flight from her family in Japan and a 40-minute drive from Seattle&#8217;s thriving Asian community.

They learned to live off Jeff&#39;s tiny Army private&#8217;s paycheck. Ko, who had lived in Japan her entire life, learned to pump her own gas and how to set up phone service with a U.S. company.

And when Jeff came home after being deployed for weeks at a time, he learned to answer his wife&#39;s sometimes strange questions about the dysfunctional couples she watched on Oprah and Jerry Springer: Were all Americans like that? Would he ever treat her that way?

Eight years later, Jeff and Ko Waye laugh about the early days of their marriage. But the couple, who live in Seoul, have had to make plenty of sacrifices because they come from different countries.

And they have one piece of advice for other bicultural couples: Don&#8217;t expect life to be easy.

Adjusting to the military

Adjusting to life as a military spouse can be as difficult, if not harder, than overcoming cultural differences.

Tech. Sgt. Don Slayton, the noncommissioned officer in charge of Kunsan Air Base&#8217;s fitness center, said he worries about what will happen to his South Korean wife if they move to the United States and he&#8217;s deployed.

Pat Wheeler, wife of Command Sgt. Maj. Barry Wheeler, the senior enlisted servicemember in U.S. Forces Korea, teaches a session for the USO Cross-Cultural School on being a military spouse.

The non-American spouses usually ask the same questions as American spouses: Why are their husbands so tense before an exercise? What should they expect when their soldier deploys to Iraq or Afghanistan? How do they talk to him when he returns? How do they deal with his post-deployment mood swings?

Many have never been to the United States and are worried about moving there.

Wheeler tells them to be themselves, learn about the military so they have something in common with their husband or wife, and get involved in the military community.

Many are nervous about speaking English, and that&#8217;s the biggest barrier.

&#8220;Even if the person speaks with a good command of English, whether they understand what is being said is questionable,&#8221; said Jones, who is married to a Filipina.

To help new spouses adjust, the USO started a &#8220;bride school&#8221; shortly after the Korean War ended in 1953. The classes then focused on basic household skills, such as how to use a vacuum cleaner and other appliances.

The USO still teaches one- and two-week marriage courses for foreign-born spouses of U.S. soldiers. Now called the Cross-Cultural School, courses include sessions on how to read a military paycheck, U.S. holidays, healthy relationships, and how to make cookies &#8212; essentially a class on how to use an oven, an appliance uncommon in Korean homes.

Most of the students are women, and they come from around the world.

The couples, however, often have different expectations about housework, relationships with their parents, money and even whether the wife will adopt her husband&#8217;s last name &#8212; something not done in South Korea.

Intermarried couples say they&#8217;ve had to make compromises before and during marriage.

Vince Adams wasn&#8217;t kidding when he promised to love his wife until &#8220;death do us part.&#8221; Shortly after the Air Force technical sergeant married his wife, Yuko, 12 years ago, he asked her where she wanted to be buried &#8212; near his family in the United States, or on Okinawa, where she was born.

&#8220;It was a least-expected thing to hear from him,&#8221; said Yuko. But for Adams, stationed at Kadena Air Base, Okinawa, it was his way of honoring his Japanese wife&#8217;s family-centered culture, and of making a commitment to be with her even after death.

&#8220;If you&#8217;re married to someone in the military, you have to be married to military, too,&#8221; said Grace Falcon, who was born in the Philippines and married an American soldier three years ago in South Korea. They are expecting their first child, and Falcon said being away from her family is the hardest thing about being married to an American.

Marine Chief Warrant Officer Michael Easley, who met his Japanese wife, Noriko, while scuba diving, said he knew being married to someone from a different culture wouldn&#8217;t be easy.

&#8220;We have families in two opposite ends of the world,&#8221; he said. But they talked about the sacrifices they would need to make before they married, and his wife said she would follow him wherever he chose to be.

Back in Seoul, the Wayes said they picked names for their three children that would be easy to pronounce in English and Japanese: Hiro, 6, Riku, 4, and Jun, 2.

Jeff, who wants to take jobs that will let Ko be reasonably close to her parents in Japan, said their toughest decision will be deciding where to settle down when they retire.

Both say the adjustments have been worth it, and underneath the cultural differences, their marriage isn&#8217;t different from any other.

Premarital counseling is a must in S. Korea

SEOUL &#8212; Neither U.S. Forces Korea nor the U.S. Embassy in Seoul tracks how many U.S. servicemembers marry foreigners in South Korea each year.

But enough marry that USFK officials instituted a 12-step marriage counseling regulation in March, and in July made a review of the regulation part of the orientation all soldiers go through when they arrive in South Korea.

The regulation requires servicemembers to notify their commanders that they plan to marry, submit their spouse to a background check and medical exam and get premarital counseling from a military chaplain.

The goal: Decrease the number of servicemembers who have to move out of South Korea before their spouse can get a visa, a process that can take months, if not years.