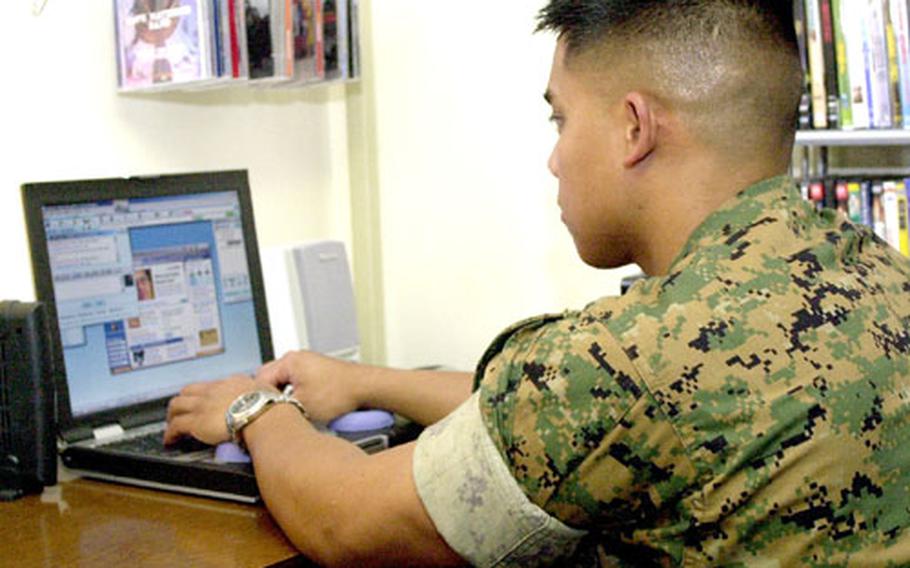 Staff Sgt. Edward Tiglao uses his new cable modem Internet connection to chat online with his family. The broadband connection has brought an exciting change in the quality of life for Marines at Camp Fuji. (Jim Schulz / S&S)

CAMP FUJI, Japan &#8212; Marines and sailors say life at this isolated Marine Corps base about 60 miles from Tokyo has improved vastly with the availability of Internet service to their rooms.

Previously, the Internet could be accessed only through duty computers.

So far, 110 customers have signed up for the $40-per-month, unlimited broadband service, Shioya said, adding there are about 300 rooms on Fuji that could be serviced.

The connection speed is fast, Shioya said, and allows users to view streaming video and Web cams, among other features.

Marines say there are still a few kinks in the new system: &#8220;About three or four times a week, you have to reboot, disconnect the cable, to get it to start,&#8221; said Marine Lt. Stan Nycek, Camp Fuji&#8217;s chaplain.

The new service is a huge cost-savings for those who often called home, some say.

Thomason now uses e-mail and instant messaging to keep in touch and only buys about two cards a month.