The video game room at the Kandahar Airfield, Afghanistan, MWR center is popular with the troops. (Michael Abrams / S&S)

The video game room at the Kandahar Airfield, Afghanistan, MWR center is popular with the troops. (Michael Abrams / S&S) 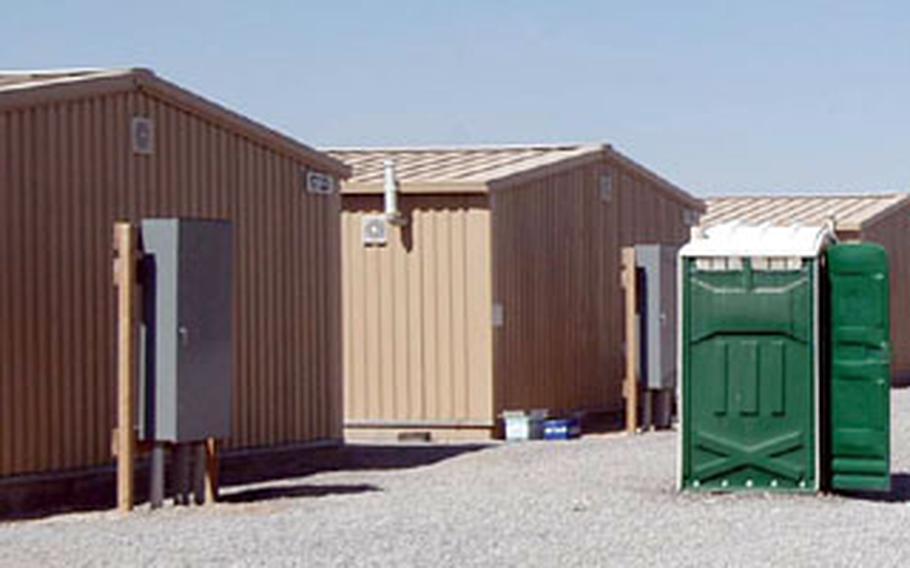 The new modular housing at Kandahar airfield, Afghanistan, features seven rooms that house two to four people per room. The portable toilets soon will disappear, as the housing will have indoor plumbing in the near future. (Michael Abrams / S&S)

KANDAHAR AIRFIELD, Afghanistan &#8212; Flip-flops might soon disappear from the must-have lists of servicemembers stationed at this high desert base.

That&#8217;s because new modular housing units will soon have functioning toilets and showers inside the units. So no more walking over rough rocks to get to the facilities.

Drinkable water and flushable toilets are not common in most of Afghanistan. And, after three years in country, the U.S. military still has a lot of work to do to bring a semblance of modern life to their facilities. Kandahar might be the closest to making it happen. Its facilities are quickly becoming the most modern in the theater.

It now has 156 modular housing units. They&#8217;re not elegant to look at, but the metal structures each contain seven rooms &#8212; sleeping two to four people &#8212; with an eighth designated for toilets and showers. Those could be working in about a month, Hardy said.

In order for that to happen, sewer and water lines have to be finished. So does a concrete reservoir that will hold up to 350,000 gallons of drinkable water. Hardy, a National Guardsman from Texas who serves as an architect in his civilian life, also plans to have a modern sewage treatment plant on base to replace the sewer pond close to the modular housing &#8212; much too close if the wind&#8217;s blowing in the wrong direction.

If Hardy gets his way, the moving is far from over. He hopes to relocate the current Army and Air Force Exchange Service store and other AAFES vendors near the airport to a spot closer to the modular housing. It would be next to a new dining facility, an outdoor recreation area and three huge festival tents.

One of those tents houses &#8220;probably the nicest gym in the entire Afghan theater,&#8221; Hardy says. There are dozens of weight-lifting stations, treadmills and assorted equipment designed to get or keep soldiers in shape.

The gym is a popular place, but it might not be as popular as the MRW tent next to it. That houses a small movie theater, library, music room, pool and ping-pong tables and dozens of televisions hooked up to video games.

Soldiers who have been based at Kandahar in previous rotations seem to be impressed by the changes.

&#8220;Kandahar has changed dramatically,&#8221; said Capt. Jay Smith, commander of the 74th Infantry Detachment/Long Range Surveillance, part of the incoming 173rd Airborne Brigade. He served in the area with the 101st Airborne Division in March 2002.

About 5,000 people currently call the base home. Most are American servicemembers, but there are also more than 1,000 civilians and military units from the United Kingdom, the Netherlands and Romania.

Kandahar airfield is similar to Bagram Air Base in that it&#8217;s not located next to any large city. And both have room to grow. But the geography is different. Kandahar borders a high desert and is about 1,500 feet lower in elevation. Temperatures soar in the summer and dust storms are prevalent.

Hardy said the United States and the Afghan government haven&#8217;t agreed to a long-term commitment at Kandahar. But he says there&#8217;s a lot more work that could be done if American forces stay a while.