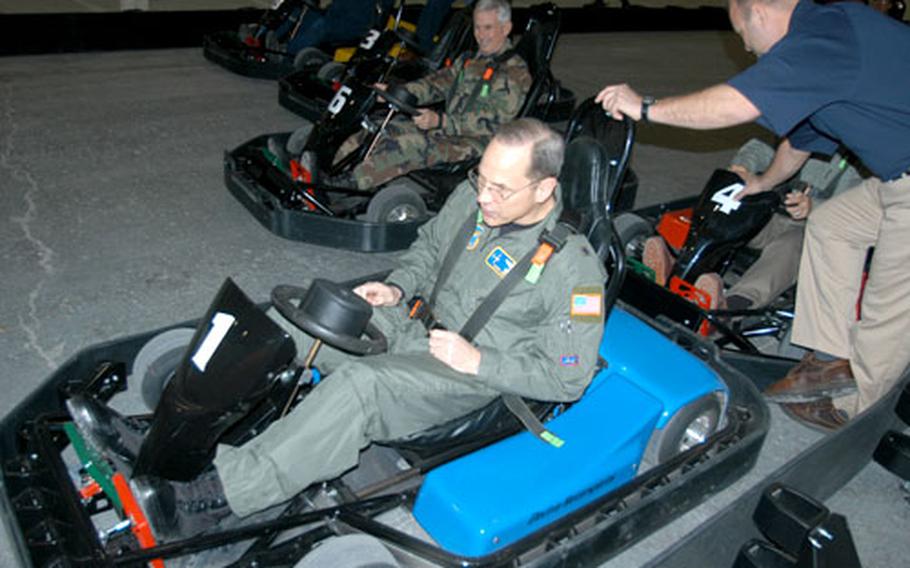 Brig. Gen. Mark Anderson, lead evaluator for the Commander In Chief’s Installation Excellence Award team, takes a spin in a go-cart Tuesday morning at the Weasel’s Den, Misawa Air Base, Japan. Misawa is one of three finalists for the Defense Department award that recognizes bases for maximizing resources to improve mission and quality of life. (Jennifer H. Svan / S&S)

MISAWA AIR BASE, Japan &#8212; They dined in the mess hall, food court, school cafeteria and the officers club ballroom. They also rode go-carts; walked through fitness centers, fire departments and dormitories; and talked with airmen of all ranks and units.

The team that will determine whether Misawa deserves the title &#8220;Best in the Air Force&#8221; and a $1 million prize completed an exhaustive, day-and-a-half tour of this northern Japan base Tuesday.

Misawa is competing against McConnell Air Force Base, Kan., and RAF Lakenheath, England, for the 2005 Commander in Chief&#8217;s Installation Excellence Award.

This is the second consecutive year Misawa is a finalist. As such, the base already is guaranteed $500,000 for quality-of-life improvements.

Lead evaluator Brig. Gen. Mark Anderson and four Air Force wing commanders split up for much of the visit to cover as much ground as possible, base officials said.

Anderson said the evaluators are looking at &#8220;all components that go into operating a base,&#8221; from airfield and flight operations to civil engineering, clubs and recreation centers.

The award recognizes Defense Department installations that have maximized their resources to &#8220;enhance both the mission and the people at their base,&#8221; said Anderson, who works at the Pentagon as mobilization assistant to the deputy chief of staff for installations and logistics.

&#8220;We&#8217;re very, very pleased with what we&#8217;ve seen&#8221; so far, Anderson said of Misawa. The team has been to McConnell and was to depart Tuesday night for Lakenheath. The winner is to be announced later this year.

Tuesday morning, Anderson and evaluator Col. Andrew Weaver, from Wright Patterson Air Force Base, Ohio, stopped at the Weasel&#8217;s Den and experienced firsthand how the base put to use the 2004 installation excellence finalist money. Base officials said some of that money was spent adding a climbing wall and skateboard park to the indoor recreation center, which opened last year in Hangar 973. Anderson and Weaver didn&#8217;t lace up their climbing shoes, but they took a spin in new electric go-carts with 35th Fighter Wing Commander Brig. Gen. Bill Rew and other wing leaders.

They also listened to a 35th Contracting Squadron briefing by Tech. Sgt. John Rogers, who noted the hangar was converted using Air Force, Navy and nonappropriated funds and is open to the base population, including Japan Air Self-Defense Force members.

Base officials undertook the $246,000 project to improve quality of life for unaccompanied airmen and youth on base during Misawa&#8217;s long, harsh winters.

Rogers touched on other recent base projects, from a new small arms firing range to a $1.2 million Grissom Dining Facility facelift.

But Anderson said he often quizzes airmen: &#8220;I like to ask if you were chosen as the installation excellence winner, what would like to change? I also ask them about quality of life: &#8216;How long have you been here, would you like to stay?&#8217; Just to get a sense at a very personal level how the base is supporting the member and his or her family.&#8221;