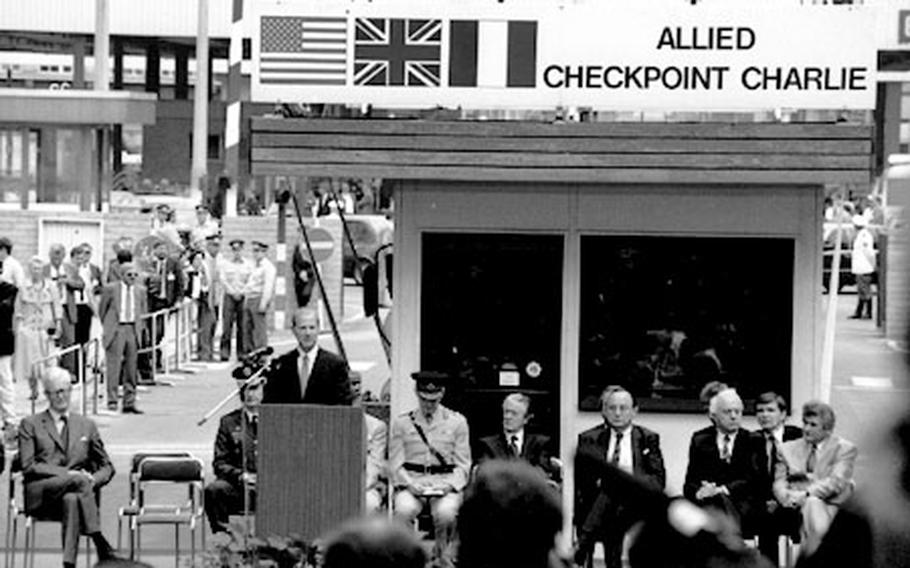 Buy Photo
A crane moves the 50-foot-long Checkpoint Charlie guardhouse to a waiting truck after the ceremony. (Dave Didio/Stars and Stripes) Buy Photo
Berliners watching the ceremony hang out a sign saying "It's a shame, we prefer Checkpoint Charlie." (Dave Didio/Stars and Stripes)

BERLIN — Checkpoint Charlie, a warm sign of freedom in a Cold War city, closed down Friday. A huge crane picked up the little white shack and a truck took it away.

As a 21-person platoon of British, French and American military police stood at attention, the French commandant in the city gave the order. "Please close the Checkpoint Charlie control point."

One MP from each-nation then marched to the side of the building, removed an "Allied Checkpoint Charlie" sign and marched forward with it as though carrying a coffin. At Maj. Gen. Francois Cann's order of "Dismiss your detachments," the platoon departed.

The crowd then watched as the 50-foot-long hut was lifted by crane, dangled about 15 feet in the air for photographers, then swung onto a flatbed truck in an adjacent parking lot. It's now likely headed for a museum.

The building was removed to polite applause and the U.S. Berlin Brigade Band's rendition of "Das Ist die Berliner Luft." ('That is Berlin's air.")

"We have come together not to dedicate a building, but to close one," Maj. Gen. Raymond E. Haddock, the U.S. commandant in Berlin, said as he welcomed guests "for a different kind of ceremony."

"When the Berlin Wall was built 29 years ago, optimism was in rather short supply, and the new reality of concrete and barbed wire appeared to many as insurmountable," he said. "What was a new reality 29 years ago has not withstood the test of time."

Haddock noted that the unimpressive appearance of the latest MP station, which was installed in 1986, disappointed many visitors.

"There was something unfinished, something temporary about it," he said. "These impressions, however, were altogether accurate. For the temporariness of the structure reflects the permanence of the determination of free men to uphold the freedom of movement in Berlin."

During its days of duty, Checkpoint Charlie stood about 20 yards from an East German checkpoint and was the only legal crossing point for U.S. servicemembers and civilians traveling between East Berlin and West Berlin. It lost that monopoly March 28.

Also present at the elaborate, well-rehearsed ceremony were the foreign ministers of the two Germanys, France, Britain, the Soviet Union and the United States. The foreign ministers were in Berlin for the so-called 2-plus-4 negotiations on the unification of Germany.

U.S. Secretary of State James A. Baker III said: "At this checkpoint, the United States stood with its allies and with the German people, resolved to resist aggression and determined to overcome the division .of the Cold War. And now, with the help of a new generation of Soviet leaders, that time has come."

British Foreign Minister Douglas Hurd drew the most applause when he said:

"At long last we are bringing Charlie in from the cold."

Invited-guest seating and a media gallery filled the street on the West Berlin side of the checkpoint, and spectators were held at the intersections of the next two streets crossing Friedrichstrasse.

Many Americans in uniform were in the crowd. Spectators waved American and West German flags during the ceremony.