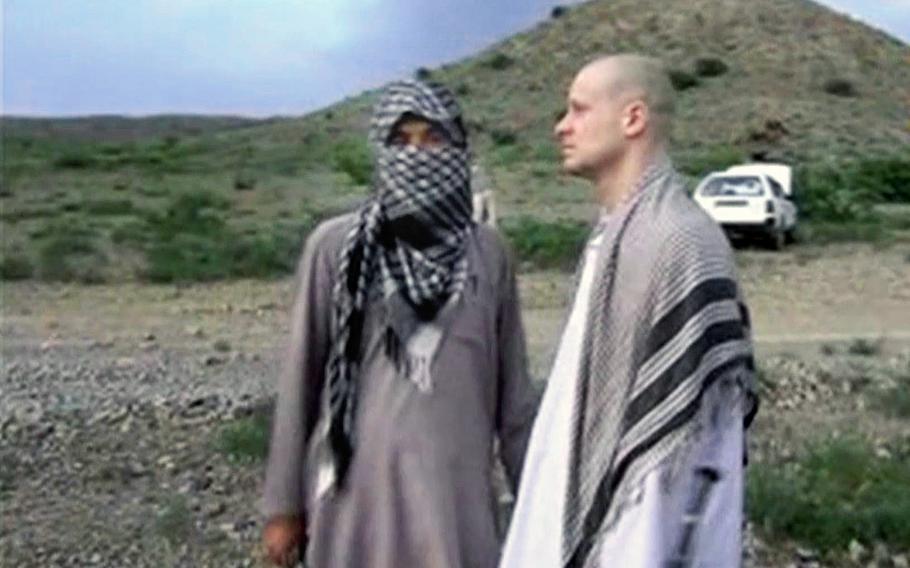 WASHINGTON — The court-martial against accused Army deserter Sgt. Bowe Bergdahl was delayed this week as his attorneys asked a third court to dismiss the case over disparaging comments President Donald Trump often repeated on the campaign trail about the former Taliban captive.

Bergdahl’s lawyers filed an appeal Thursday to the U.S. Court of Appeals for the Armed Forces asserting their client’s case must be dismissed because Trump’s comments, including calling the soldier a “dirty, rotten, no good traitor,” could undermine the public’s confidence in his ability to receive a fair trial.

The appeal to the highest military court came after the military judge overseeing the case, Army Col. Jeffery R. Nance, declined to dismiss the case in February over Trump’s statements and an appellate court, the U.S. Army Court of Criminal Appeals, last week upheld Nance’s ruling.

“President Trump’s repeated public vilification of Sgt. Bergdahl must be explicitly acknowledged as apparent [unlawful command influence] and decisive remedial action taken,” Bergdahl’s attorneys wrote in the court document. “The court should reverse the judgment of the Army court and grant a writ of mandamus dismissing the charges.”

Under military law, individuals with command responsibilities cannot influence or ever appear to influence judicial proceedings.

Bergdahl, 30, is expected to face a court-martial in August on charges of desertion and misbehavior before the enemy that stem from his 2009 disappearance from his eastern Afghanistan combat post. This week, Nance pushed back the April 18 trial date, a move that he had previously hinted would occur. The judge instructed both sides to plan for the court-martial to begin Aug. 7, according to Bergdahl’s attorneys.

In Nance’s February decision denying dismissal, the judge wrote Trump’s comments were “disturbing and disappointing” and potentially “problematic.” However, he ultimately sided with assertions raised by prosecutors that they were primarily campaign trail rhetoric aimed at attacking President Barack Obama’s controversial May 2014 decision to trade five senior-level Taliban members detained at Guantanamo Bay in Cuba for Bergdahl’s release.

Nance suggested careful screening of potential jurors to determine whether they were impacted by the now-president’s comments would alleviate the defense attorneys’ concerns.

“The statements of a private citizen, even if running for president, cannot be unlawful command or influence,” Nance wrote. “No reasonable member of the public, apprised of all the facts and circumstances and seeing campaign rhetoric for what it is, would believe that because Candidate Trump said those troubling things and is now President Trump, the accused has been or will be denied a fair trial.”

In their Thursday appeal, Bergdahl’s lawyers wrote that failure of the appellate court to dismiss the case could signal to civilian leaders of the military, including Trump, that they are not responsible for comments they make about ongoing criminal cases.

For example, they wrote, neither the president or anyone at the White House has made any attempt to walk back his previous statements. Trump has not made a public statement about Bergdahl since August. The White House did not respond Thursday to a Stars and Stripes email and phone call seeking comment.

If the case is not dismissed, “the highest profile current court-martial in the armed forces will be conducted under the dark cloud of apparent [unlawful command influence] involving a commander in chief whose term will not expire until 2021,” Bergdahl’s lawyers wrote in court documents. “Nothing will prevent him and other senior civilian officials from making further improper statements – at untold cost to public confidence and fairness to military personnel who are accused of offenses under the [Uniform Code of Military Justice].”

Bergdahl has yet to enter a plea to charges of “misbehavior before the enemy by endangering the safety of a command, unit or place” and “desertion with intent to shirk important or hazardous duty.” The more serious misbehavior charge carries a potential life sentence.

He was held for five years by the Taliban-aligned Haqqani Network in Pakistan after he was captured within hours of walking off Observation Post Mest in June 2009.

After his release, Bergdahl told Army investigators he intentionally left the post, but he insisted he only intended to cause a disturbance that would place him in front of senior leadership to air concerns about his commanders. He said he had no intention of permanently deserting his unit.

Bergdahl remains on active duty in a clerical job at Joint Base San Antonio in Texas and he has not been held in pre-trial confinement.

He is expected to return to court for a pre-trial hearing on May 5.