Bergdahl: ‘The words I’m sorry are not enough’ 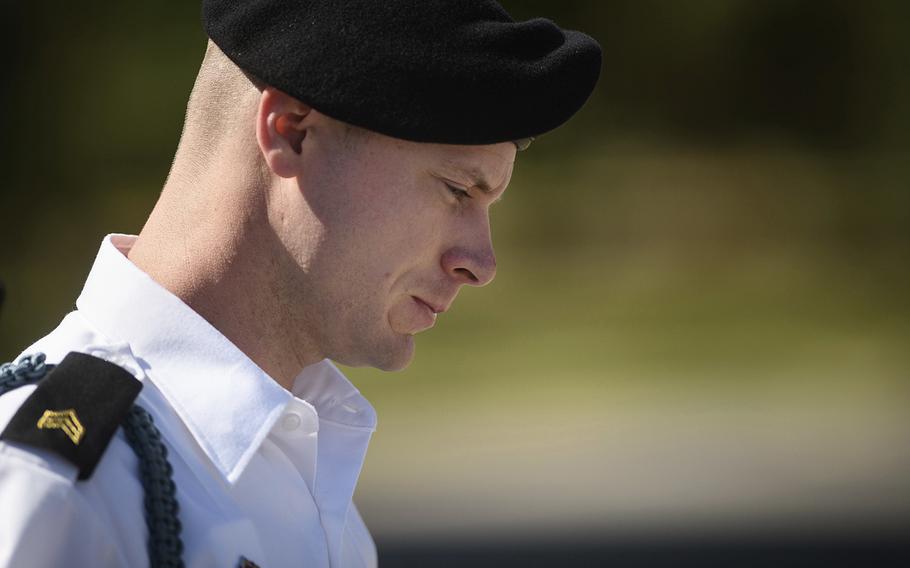 FORT BRAGG, N.C. — Army Sgt. Bowe Bergdahl took the witness stand Monday, delivering an apology to servicemembers sent searching eastern Afghanistan for him after his “horrible decision” to walk away from his combat post eight years ago.

“I’d like every person who searched for me to know it was never my intention for anyone to be hurt, and I never expected for that to happen,” the 31-year-old former Taliban captive said on the third day of a sentence hearing at Fort Bragg. “… The words ‘I’m sorry’ are not enough. My words alone can’t relieve the pain [those injured] live with.”

Bergdahl faces up to life in prison after he pleaded guilty to desertion and misbehavior before the enemy charges, admitting he endangered his fellow troops when he left Observation Post Mest in Paktika province, Afghanistan in June 2009. Bergdahl’s attorneys said they plan to conclude their case seeking lenient punishment for him by Wednesday, and the military judge overseeing the case, Army Col. Jeffery R. Nance, is expected to sentence the soldier this week.

Bergdahl, under questioning by defense attorney Capt. Jennifer Norvell, detailed his five years in captivity, some of the torture that he endured — such as years confined to a small cage — and the lingering impacts on his life, including permanent injuries and regular nightmares and flashbacks.

The soldier testified he was “accepting responsibility” for his actions after he spent much of Wednesday, Thursday and Monday listening as prosecution witnesses spoke of the massive recovery effort launched to find him and detailed debilitating injuries suffered by three servicemembers sent on those operations. Prosecutors rested their case Monday morning.

Bergdahl had previously told Nance that he was attempting to walk to a forward operating base some 20 miles away to alert military leadership to concerns that he had about his chain of command when he became lost and was kidnapped by armed Taliban fighters.

“I was trying to help and knowing I did not breaks my heart,” Bergdahl said Monday, during nearly two hours of unsworn testimony, which precludes prosecutors from questioning him.

A unique feature of military law, unsworn testimony allows accused servicemembers to present their story without the opportunity for prosecutors to “let some of the air out of the balloon” on cross examination, said Eric Carpenter, an assistant law professor at Florida International University and a former Army defense attorney and prosecutor.

But the statement might not carry as much weight with the judge as it would had Bergdahl been sworn in, Carpenter added.

“Most of these unsworn statements aren’t about important factual issues, rather, they tend to be about emotional issues,” he said.

In May 2014, Bergdahl was freed in a controversial exchange for five Taliban commanders who had been held at the detention facility at Guantanamo Bay in Cuba.

The Army charged him with “misbehavior before the enemy by endangering the safety of a command, unit or place” and “desertion with intent to shirk important or hazardous duty” in March 2015. He faces a maximum punishment up to life imprisonment, reduction in rank to private, forfeiture of all pay and a dishonorable discharge.

He has continued on active duty since his release at Joint Base San Antonio in Texas and has not been held in pretrial confinement.

Bergdahl, who has remained stoic through much of the previous court proceedings, grew emotional at times Monday, especially as he delivered his apology and recalled his motivations for continuing to survive through years of brutal physical and mental abuse.

At other times, he appeared physically uncomfortable, especially as he outlined the abuse he said he suffered, including beatings with copper cables, burns to his feet and repeated subjection to Taliban propaganda videos, including footage of beheadings.

“Is there something else they did that you don’t want to talk about?” Norvell asked the soldier at one point after he paused. Bergdahl’s body shook and his face became flush as he nodded “yes.”

But Bergdahl did speak of the roughly four years that he spent confined in an iron cage about 6 feet wide, 7 feet long and 6.5 feet tall somewhere in the Pakistan mountains. Militants with the Taliban-linked Haqqani network built the cage specifically for him after he managed to escape them for about eight days.

The cage, which sat about eight inches off the floor, he said, had no platform for him to sleep or stand on and he had no access to a proper toilet.

“You never could get comfortable,” Bergdahl said of that time during which he suffered from dysentery and lost nearly all use of his legs. “There was never a point where you could rest — you’d just get so exhausted you couldn’t stay awake.”

Nonetheless, the soldier carried on, continuing to plot escape attempts and gathering information about the group holding him, he said.

Witnesses called by defense attorneys Tuesday morning said some of the information Bergdahl provided them during debriefings after his return has been valuable to the government.

Terrence Russell, senior program manager for the Joint Personnel Recovery Center at Fairchild Air Force Base in Spokane, Wash., testified Bergdahl has been forthcoming with information about his captors since his release.

The soldier provided information to Russell to recreate the Haqqani’s cage that he was held in for use in courses on search, evasion, rescue and escape taught to servicemembers before they deploy. Russell, who added the Bergdahl faced conditions unseen by American hostages since the Vietnam War, said he hopes to have future access to the soldier.

“I need him now. Honestly, I needed him three years ago when he returned,” said Russell, who has debriefed more than 120 former captives, including soldiers captured in high-profile incidents in Iraq and Somalia. “The information he can provide to us to use is critical to help the fighting force.”

Norvell asked Bergdahl on the stand what motivated him to keep going even as he withered to nearly skin and bones. Bergdahl said, “Not letting them win.”

The attorney asked him to describe the worst details of his captivity.

“Just the constant deterioration of everything,” the soldier answered, pausing to wipe a tear from his face. “The constant pain from my body falling apart. The constant screams from my mind. It was years of waiting to see if the next person to open the door — if that would be the person to execute you.”