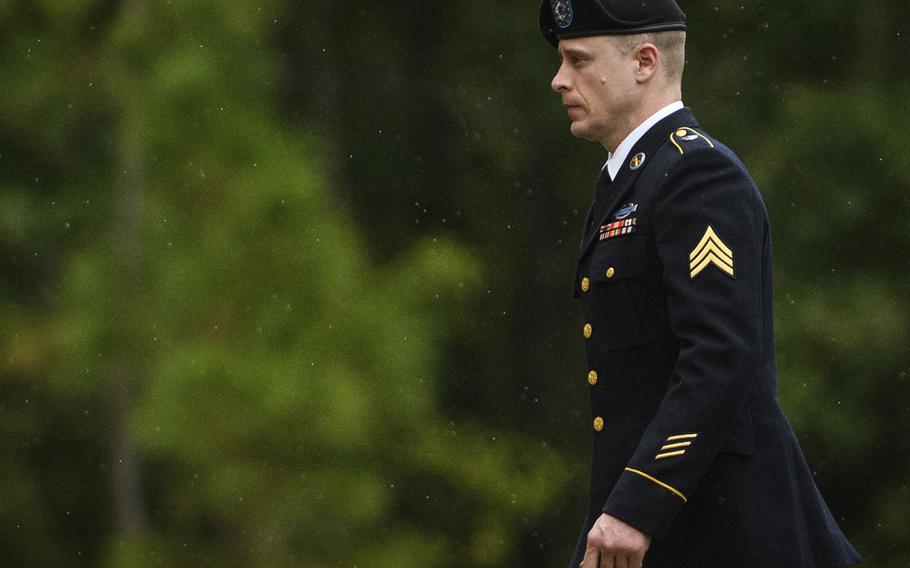 WASHINGTON – Army Sgt. Bowe Bergdahl will learn his fate inside a Fort Bragg courtroom next week when defense attorneys and prosecutors will spar over the circumstances surrounding the soldier’s decision to walk off his combat outpost in Afghanistan some eight years ago.

Bergdahl, 31, entered guilty pleas Monday to charges he deserted and endangered his fellow troops by misbehaving before the enemy when he left Observation Post Mest on June 30, 2009. The former Taliban captive’s future rests in the hands of the judge overseeing his court-martial, Army Col. Jeffery R. Nance, who could sentence Bergdahl to a maximum punishment up to life imprisonment, reduction in rank to private, forfeiture of all pay and a dishonorable discharge.

Bergdahl pleaded guilty without any deal with the Army to limit his potential sentence, known as a “naked plea.”

During pre-sentencing procedures set to start Monday at the Army post in North Carolina, Nance is expected to hear a range of testimony from witnesses over several days. The procedures, despite Bergdahl’s guilty plea, will amount to a mini-trial, which could be dramatic as prosecutors are expected to present evidence three servicemembers were severely injured on search-and-rescue missions for the missing soldier. Meanwhile, defense attorneys are expected to call witnesses who will testify Bergdahl was suffering from mental health conditions when he walked away from his post and later was subjected to severe torture by his captors.

The pre-sentencing trial is unique to military justice and allows prosecutors and defense attorneys to present substantial evidence before a sentence is imposed, legal scholars said.

Military law experts who spoke to Stars and Stripes said the naked plea is a rare and risky move by the defense.

Grey Rinckey, a practicing defense lawyer and former Army judge advocate who served as a prosecutor and defense attorney while in uniform, said he has only advised military clients twice to enter guilty pleas without a plea agreement.

“In those couple of times I’ve used it in the past, it payed off,” he said. “We got [the sentence] we wanted.”

But naked pleas can also backfire, such as in Chelsea Manning’s case, said Eric Carpenter, an assistant law professor at Florida International University and a former Army defense attorney and prosecutor.

Manning – then known as Bradley – pleaded guilty to 10 of 22 charges that she was accused of following her leak of a large cache of classified documents while she was serving as an intelligence analyst in Iraq. Manning’s attorneys thought the judge in the case, Army Col. Denise Lind, might be lenient if she admitted to her crimes, Carpenter said.

Instead she was convicted of 19 charges, including theft and six counts of espionage, and sentenced to 35 years confinement.

“They thought that the judge might give them a lighter sentence, and that judge just hammered them,” Carpenter said. “That kind of shocked a lot of people. That was a really, really high sentence.”

It will be up to Nance to weigh Bergdahl’s responsibility for injuries suffered by servicemembers on hastily planned search-and-rescue missions in the weeks after he left OP Mest with other factors including the status of his mental health and his time as a captive of enemy forces.

Bergdahl told Nance on Monday that he now understands that his decision to leave his post was wrong and called his actions “very inexcusable.” He told Nance that he did not at the time think he was placing other troops at risk, and he only planned to walk to another base about 20 miles away to meet with officials to share concerns he perceived within his chain of command.

But prosecutors have said his deserting directly led to severe injuries to three servicemembers.

In pre-trial motions, they have said Army National Guard Sgt. 1st Class Mark Allen was shot in the head July 8, 2009, while on a mission in Paktika province to find Bergdahl, leaving him confined to a wheelchair and unable to speak. Another soldier on that mission, Spc. Jonathan Morita, suffered a broken hand when he was struck by a rocket-propelled grenade that did not explode.

A day later, Senior Chief Petty Officer Jimmy Hatch, a Navy SEAL, was shot through the leg on a special operations mission to locate the captured soldier, leaving him with a permanent limp, prosecutors said.

An Army psychiatrist determined Bergdahl was suffering from schizotypal personality disorder when his left his post in 2009. The disorder is a mental illness in which individuals fail to understand the impact of their behavior on others and often leads to severe anxiety, according to the Mayo Clinic. Despite his “severe mental disease or defect,” Bergdahl “was able to appreciate the nature and quality and wrongfulness of his conduct,” the psychiatrist, Col. Christopher L. Lange, concluded in July 2015.

‘A tough case’ for the judge

“It’s a tough case,” Rinckey said. “It’s been weird, especially because of the political aspects from the start.”

Former President Barack Obama’s administration struck a controversial deal to free Bergdahl in exchange for five Taliban commanders who had been held in the detention facility at Guantanamo Bay in Cuba, drawing the ire of Republican lawmakers almost immediately after he was delivered to American special operators on May 31, 2014.

Eventually, Bergdahl would become a regular campaign trail target of President Donald Trump, who disparaged the soldier during political rallies as a “traitor” and opined that he “should be shot.” Defense attorneys attempted to have Bergdahl’s case dismissed after Trump was sworn into office, arguing his campaign trail comments made it impossible for their client to receive a fair trial.

Nance ruled Trump had made the comments as a private citizen, which did not amount to unlawful command influence. But defense attorneys filed a renewed motion Tuesday to dismiss the charges after the president referred to his past comments a day earlier without disavowing his criticism. That motion remains open, and it is unclear what action Nance might take.

One possibility is Nance – an active-duty Army officer under Trump’s command -- could take the president’s comments under consideration as he rules on Bergdahl’s sentence, Carpenter said.

“I am sure he is concerned that Trump’s comments will cause the public to lose faith in the integrity of the military justice system, so returning a fair sentence, but one that errs on the side of benefiting Bergdahl, would show that he is acting independently from Trump and help to maintain confidence in the system,” he said.

Another military law scholar said Nance should sentence Bergdahl to no punishment because of Trump’s comments.

Rachel VanLandingham, an associate professor of law at Southwestern Law School in Los Angeles and a former Air Force judge advocate, said she thinks Nance should dismiss the case, but that is unlikely.

“I think the judge should take the unlawful command influence into account at sentencing, and render a sentence of ‘no punishment,’ which would be the most fair outcome at this point,” she said. “But again, given the political pressures here, I’m concerned that fairness will continue to be lacking in the court-martial.”

Bergdahl, who has remained on active duty serving in a desk job at Joint Base San Antonio in Texas, was officially charged with “misbehavior before the enemy by endangering the safety of a command, unit or place” and “desertion with intent to shirk important or hazardous duty” in March 2015, and his case was referred to a felony-level general court-martial in December of that year.

Army officials, including the general officer who investigated Bergdahl’s disappearance and a court official who oversaw a preliminary hearing into the soldier’s case, have recommended Bergdahl not receive jail time.