In this undated photo, Father Emil Kapaun, a Catholic priest and Army chaplain, celebrates Mass in the field during the Korean War. Kapaun, already under consideration for sainthood, has won the endorsement of former Army Secretary Pete Geren to receive the Medal of Honor. (Photos by Catholic Diocese of Wichita, Kan./AP)

In this undated photo, Father Emil Kapaun, a Catholic priest and Army chaplain, celebrates Mass in the field during the Korean War. Kapaun, already under consideration for sainthood, has won the endorsement of former Army Secretary Pete Geren to receive the Medal of Honor. (Photos by Catholic Diocese of Wichita, Kan./AP) 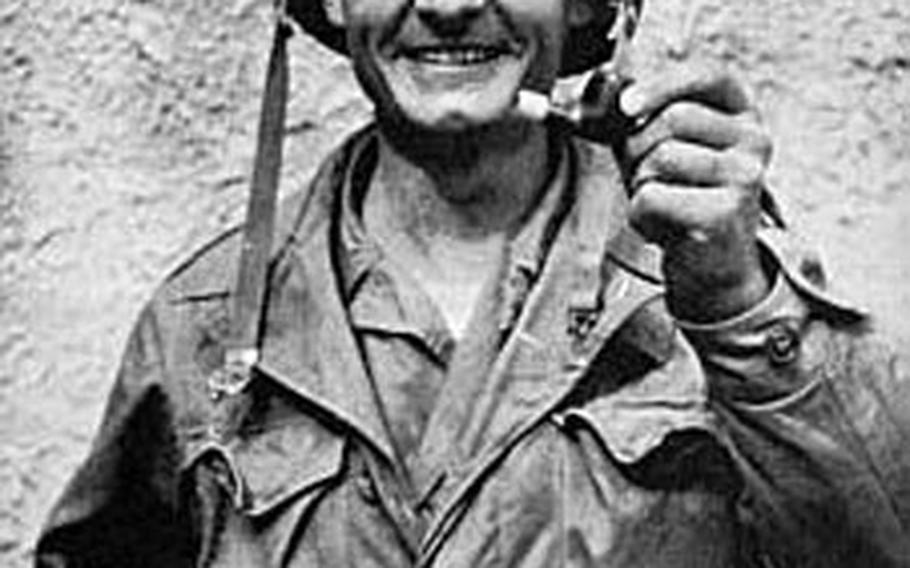 Father Emil Kapaun shows his pipe, which was shot out of his mouth by a sniper during the Korean War. ()

KAISERSLAUTERN, Germany &#8212; Chaplain (Capt.) Emil Kapaun has received many military honors since he died a prisoner of war in Korea more than 58 years ago.

There was the Bronze Star Medal with "V" device, the Legion of Merit and the Distinguished Service Cross.

But Korean War veterans who told stories of a calm and courageous foot soldier who stole food for others from his captors and tended to the wounded thought he was due one more accolade: the Medal of Honor.

After years of campaigning, they might just get their wish.

A congressman from Kapaun&#8217;s home state of Kansas learned earlier this month that in one of his final acts as Army secretary, Pete Geren recommended Kapaun for the Medal of Honor, the military&#8217;s highest decoration.

In a news release, Rep. Todd Tiahrt, R-Kan., posted a portion of the letter Geren wrote to him about his decision: "After giving this request careful, personal consideration, I have determined that Chaplain (CPT) Kapaun&#8217;s actions in combat operations and as a prisoner of war in Korea warrant award of the Medal of Honor &#8230; This brave Soldier clearly distinguished himself by his courageous actions."

Tiahrt&#8217;s press secretary, Wendy Knox, said Tiahrt has petitioned the Army since at least 2001 on behalf of Kapaun.

Army officials at the Pentagon said that, typically, the Army secretary&#8217;s recommendation would next be forwarded to the secretary of defense, then to the president for a final decision.

Army officials, however, would not confirm whether Geren forwarded Kapaun&#8217;s Medal of Honor recommendation to Defense Secretary Robert Gates because the service does not comment on the status of awards during the approval process.

Knox said Tiahrt&#8217;s office was not given a timeline of when to expect a decision from President Barack Obama.

"We had been praying for it, to be able to see the day that he could get the Medal of Honor," Helen Kapaun, 80, said by phone Wednesday from Wichita, Kan. She was referring to herself and her husband, Eugene Kapaun, 85, who is Emil&#8217;s younger brother.

Kapaun was captured by the Chinese in the fall of 1950, when Communist forces overran the 1st Cavalry Division in northern Korea near the Chinese border. American commanders had ordered their forces to retreat, but Kapaun, a Catholic priest with the 3rd Battalion, refused and stayed to care for the men who couldn&#8217;t flee.

Story has it that Kapaun was administering the last rites to a dying soldier when he was captured, while huddled with a group of more than 50 wounded people he had helped gather in an old dugout. Fellow prisoners told of how Kapaun continued to care for his men even though he was weakened and sick himself. He died seven months later in a prison hospital in Pyoktong.

According to the Army, at a memorial service honoring Kapaun in 1954, Army Chief of Chaplains Patrick J. Ryan relayed the feelings of former prisoners:

"Men said of him that for a few minutes he could invest a seething hut with the grandeur of a cathedral. He was filled with the spirit of Christ. In that spirit he was able to inspire others so that they could go on living &#8212; when it would have been easier for them to die."