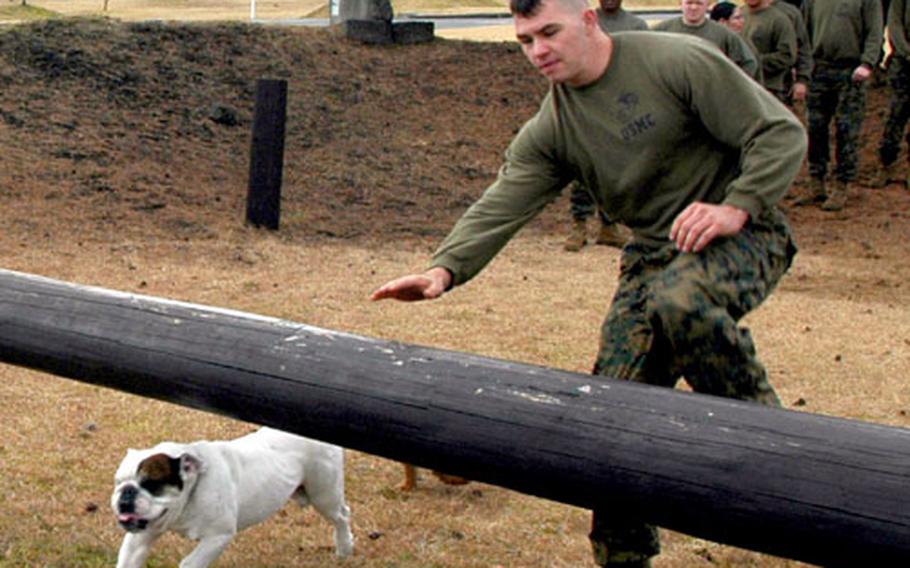 Gruff at times to his fellow Marines, the recently retired Jiggs was known for his ability to bring a formation of Marines to attention with a single bark.

But barking is one of the things a bulldog does best.

The beloved mascot of Camp Fuji, Jiggs roams the base on his own accord, stopping in on staff meetings, inspecting the barracks and going along on community relations visits.

"He&#8217;s pretty funny sometimes," said Cpl. Chad Lepine, adding that Jiggs will bark to bring Marines to attention and "reprimand" them if they&#8217;re not quick enough.

And while the old bulldog might have stepped down from his official status as mascot, he shows little sign of slowing down and even runs physical fitness tests with the Marines.

Each of the mascots is given the name of a Medal of Honor recipient, followed by the name Jiggs and a number to indicate succession, Mittnacht explained.

Rank is earned meritoriously, and Mittnacht noted that Jiggs has even been demoted for bad behavior.

Pfc. Jerica Neilson said she was terrified of Jiggs when she arrived at Camp Fuji.

"When I first got here, he used to bark at everybody, and I heard he would bite people," she said. "Now I just want to take him home with me."