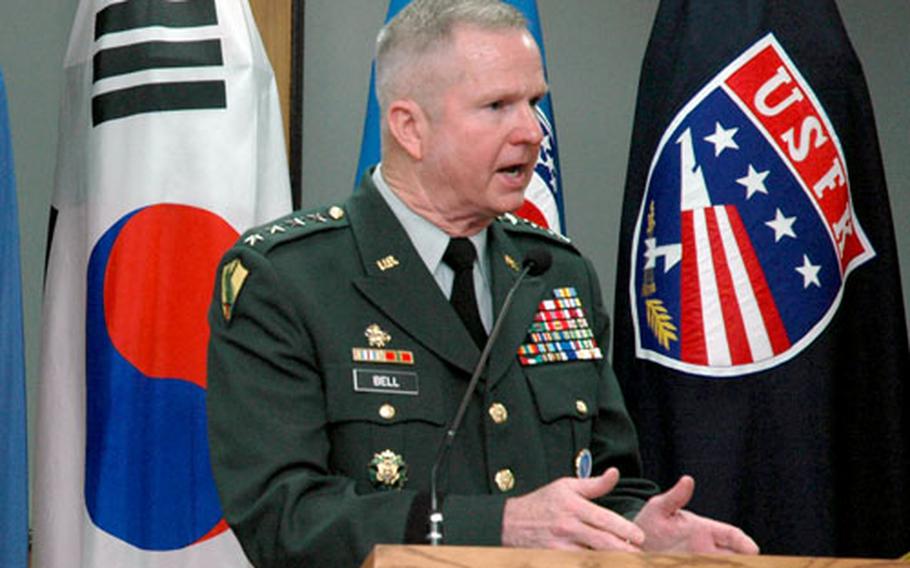 YONGSAN GARRISON, South Korea &#8212; America&#8217;s top military official in South Korea on Monday cautioned North Korea to use &#8220;long and deliberate thought&#8221; before pursuing its nuclear programs or taking any aggressive measures toward its southern neighbor.

Last month&#8217;s nuclear test by North Korea did nothing to deter a long-term plan to rely on a combination of South Korean ground forces and American naval and air forces during a wartime crisis on the peninsula, Gen. B.B. Bell, U.S. Forces Korea&#8217;s commander, said during a press briefing.

&#8220;Anyone who is considering attacking the Republic of Korea ought to consider with long and deliberate thought the capacity of the U.S. to bring those two capabilities to bear and do it very, very quickly,&#8221; Bell said, referring to South Korea by its official name.

During much of the hourlong conference, Bell&#8217;s message seemed directed less at the national and international press and more at North Korea.

&#8220;I hope for a peaceful and diplomatic resolution of the North Korean nuclear issue,&#8221; Bell said. &#8220;However, and as is always the case, if deterrence fails and North Korea attacks the Republic of Korea, the ROK-U.S. alliance forces will quickly and decisively defeat any aggression.&#8221;

Bell repeatedly urged the communist country to stop making nuclear weapons and return to diplomatic talks. Bell warned that the U.S.-South Korean alliance is capable of defeating a North Korean invasion and that the Oct. 9 nuclear test did not upset that balance of power.

The general, who took command of the 29,500 USFK servicemembers in February, said the U.S. military here is under no orders to implement a specific nuclear strategy or pre-emptive strike plans in response to North Korea&#8217;s nuclear test last month, Bell said, disputing local news reports to the contrary.

Instead, both the U.S. and South Korean military continue to position weaponry and manpower as deterrents against any invasion and to prepare in case provoked by the North, Bell said.

&#8220;We&#8217;re in the business of deterring through strength, and should deterrence fail and North Korea attack, to quickly and decisively defeat the aggressor, which we will do and, trust me, we&#8217;re quite capable of doing,&#8221; Bell said.

During an invasion, Bell would command both American and South Korean forces under current operating agreements with both governments.

That wartime control is expected to switch from the Americans to the South Koreans in coming years, according to a new agreement struck last month between Defense Secretary Donald Rumsfeld and his South Korean counterpart, Yoon Kwang-Ung.

Yoon last week offered to resign now that the agreement has been struck, according to an Associated Press report.

The agreement sets a target window for the transfer from Oct. 15, 2009, to March 15, 2012. On Monday, Bell repeated his belief that turnover of wartime control is possible in three years, though many South Korean military officials, including retired officers, have protested the shorter timeline.

Bell said he believes both countries can draw up a transfer plan by the middle of next year.