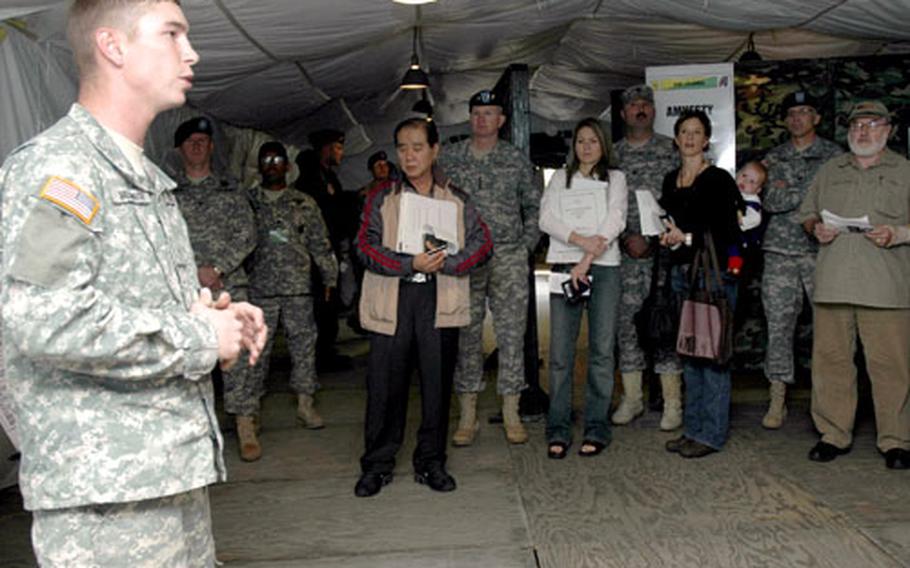 Military civilian workers and dependents listen to a briefing Friday during a semi-annual evacuation training exercise. Among the listeners is Gen. B. B. Bell, commander of U.S. Forces Korea. (Teri Weaver / S&S)

Military civilian workers and dependents listen to a briefing Friday during a semi-annual evacuation training exercise. Among the listeners is Gen. B. B. Bell, commander of U.S. Forces Korea. (Teri Weaver / S&S) 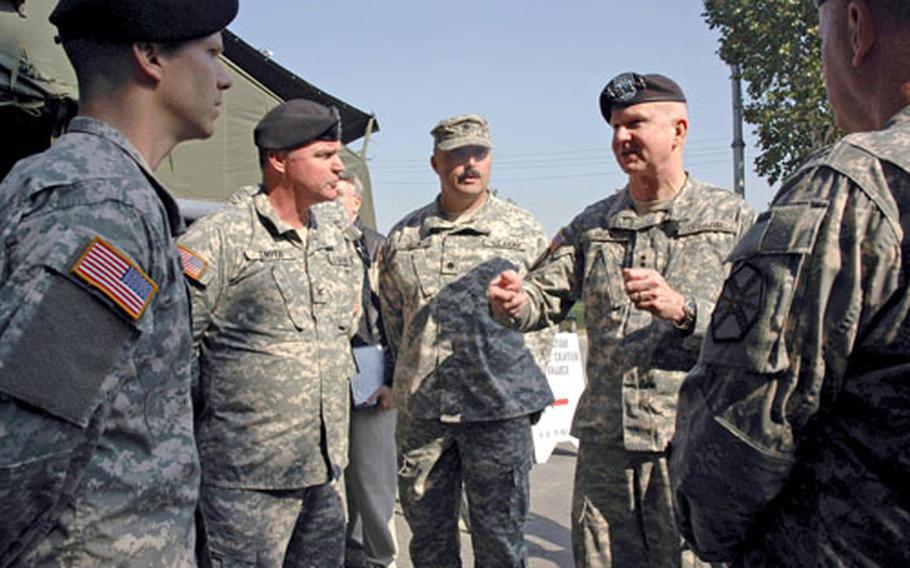 YONGSAN GARRISON, South Korea &#8212; As U.S. military civilian workers and military families made their way through a practice run of an emergency evacuation of South Korea on Friday, U.S. Forces Korea&#8217;s top commander asked what his military commanders have learned from last summer&#8217;s crisis in Lebanon.

In Lebanon, &#8220;they found the Americans in chaos,&#8221; said Gen. B.B. Bell during a walk-through of this weekend&#8217;s semi-annual practice of evacuating nonessential personnel during a crisis.

Local commanders said they are expecting information soon from the Marines, who led the evacuation of thousands of Americans after Israel attacked Lebanon last summer. In the initial stages of that rescue, the American effort appeared to lag behind that of other nations. On Friday, Bell recounted the summer&#8217;s news reports.

As he walked through the Courageous Channel exercise, he talked about the challenges of helping people in crisis and the planning that is essential for ensuring the smallest details are considered before a manmade or natural disaster happens.

In South Korea, 14,900 military civilian workers and family members are required to go through the practice noncombatant evacuation operation twice a year. But Bell asked whether commanders needed to use punishments to ensure participation.

On Friday, 6,500 of the expected 14,900 already had gone through the exercise, on target for participation for the 48-hour period, Air Force Col. Cam Torrens said.

All told, the U.S. military would be responsible for evacuating 155,000 people from the peninsula in a crisis, according to State Department numbers, Torrens said.

But, Bell asked, what happens when thousands more show up? What about their cars and their pets?

He also asked about pet evacuation for USFK families. Col. Stanley E. Smith, the 106th Veterinary Detachment commander, said vet officials are proposing mandatory &#8220;microchipping&#8221; of all pets within the USFK community. Currently, the computerized identification implant is required only for pets under 25 pounds.

But with an estimated six of 10 U.S. families within USFK having pets, Bell asked where the other thousands of animals will go while awaiting a ride out of South Korea.

Bell said he didn&#8217;t want answers on Friday so much as a more detailed set of anticipated needs and problems to help avoid chaos in a real crisis. He said he&#8217;s overseen the close of many overseas military bases during peacetime and even then, shipping pets and cars causes confusion.