Bell: South Korea ‘has changed … for the better’ 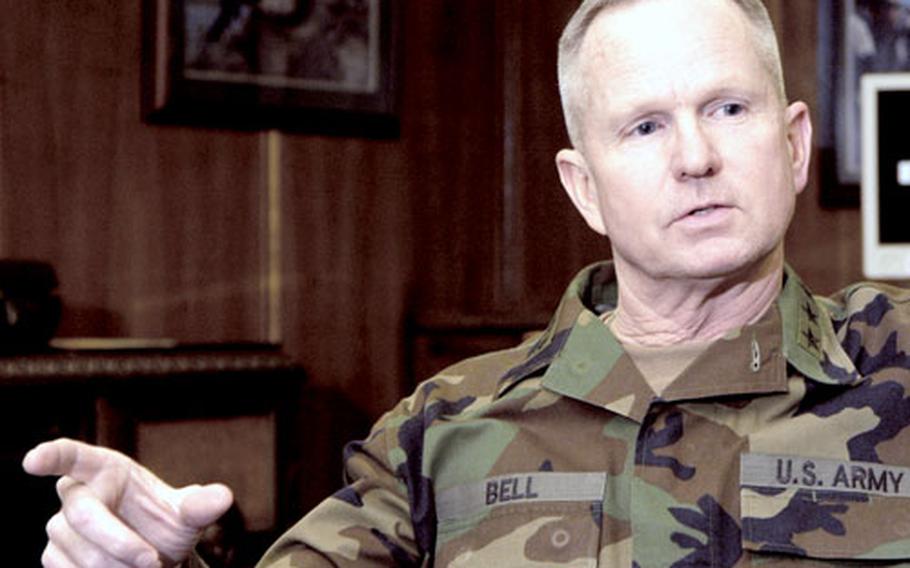 He gained leadership during a time of major transition on the peninsula. U.S. forces are downsizing, dozens of smaller U.S. camps have closed and the military is planning to move its forces onto two major hubs south of Seoul. Even the headquarters, located in the heart of Seoul, is to move by 2008.

Bell offered Stars and Stripes an exclusive interview so he could discuss his first impressions and thoughts on the U.S.-South Korean alliance, the North Korean threat and plans for the future.

This is the first part of a three-day series featuring excerpts from the interview.

On South KoreaSince I&#8217;ve arrived here, the first thing I found out was that the alliance, the partnership, the combined forces approach to warfare and USFK has changed significantly &#8212; and I think for the better given the nature of our times.

I believe you have to look at things &#8230; in the context in which you find them. What I found was an unbelievable vibrant nation of Republic of Korea, much more so than I ever understood.

Now, in that context, you have a Republic of Korea that not only has this great economy, but [also] has a very capable military. It&#8217;s large. It&#8217;s very modern, quite frankly. It trains to standard. It lives in the field where it ought to live in the field so it&#8217;s hardened for readiness. It knows how to fight.

It&#8217;s got a very capable air force that&#8217;s impressive and a &#8230; naval force that&#8217;s capable of defending its shores, and it&#8217;s responsive to civilian government like militaries ought to be. In other words, it serves the needs of the nation.

On the transformationIn the context of a vibrant democracy, the kinds of pressures that we see on our traditional commands over here, Combined Forces Command, USFK, the UNC, are &#8230; to be expected.

It&#8217;s what you would expect in a democratic society. Asking questions about what&#8217;s the right relationship to continue to deter, to guarantee the defeat of an aggressor &#8212; the North Koreans &#8212; and to continue to achieve the goal of all freedom-loving nations in this area of the world: security and stability.

And one would expect that to change over time. And it has. You know we used to have hundreds of thousands of soldiers here and we don&#8217;t anymore. We used to exercise command-and-control of the Republic of Korea military in peacetime. Things have changed. We have been transforming.

And so, what I&#8217;ve seen here in looking back on arrival is an honest effort by both parties &#8212; United States and Republic of Korea &#8212; to transform the various commands over here, to meet the needs of this area of the world and the Republic of Korea in the 21st century.

For example, the articulated desire of the Republic of Korea to achieve independent command of its forces in wartime, should a war break out, makes sense. But why wouldn&#8217;t it make sense?

In fact, it makes so much sense that last October, the Minister of Self Defense of Korea and the Secretary of Defense [of the] United States signed an agreement to form a group to study this process to determine how and when it could be achieved without creating a risk in the deterrence factor or the war-fighting factor.

The methodology to achieve security in this area of the world is viewed over the years in command arrangements.

On the command structureThe current command is, in my view, postured correctly, all three commands, to achieve the alliance requirement in the future. It is a healthy command. It is a command that is effective in continuing to achieve its deterrent paradigm and it is &#8230; more than adequately capable of decisively defeating an attack by North Koreans and doing it quickly.

And so I am heartened by what I find. And I believe that, as we go through the next months and years of determining any future command relationships &#8230; that we&#8217;ll always keep the watchwords in front of us: deter and defeat if necessary, maintain the alliance, growth for both nations, democratic institutions, market economy, thriving democracy.

I mean, you keep those in front of you, and make certain that what you do together ensures that those remain paramount, you&#8217;re going to be OK.