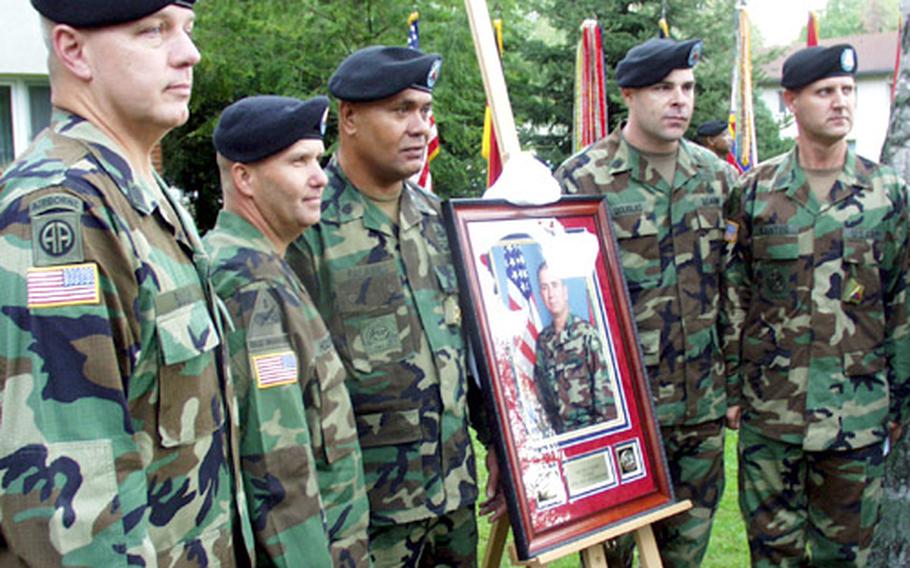 HEIDELBERG, Germany &#8212; Some of the Army&#8217;s most senior soldiers in Europe opened the second day of the Land Combat Expo by paying tribute to a fallen friend and colleague during a solemn memorial Wednesday.

The troops assembled to dedicate the VIP guest house in Heidelberg to Command Sgt. Maj. Eric F. Cooke, who was killed in action on Christmas Eve in Iraq last year.

&#8220;Today, we close ranks to celebrate and honor the ultimate sacrifice of one of our great noncommissioned officers,&#8221; Gen. B.B. Bell, commander of U.S. Army Europe, said before the assembly of mostly sergeants major, colonels and general officers.

Cooke was the top enlisted soldier of 1st Armored Division&#8217;s 1st Brigade when he was killed in an ambush. He is among more than 130 Europe-based soldiers killed in Iraq so far.

Choking back tears, 1st Armored Division commander Maj. Gen. Martin Dempsey told Cooke&#8217;s mother that the largest base camp in Iraq &#8220;was named after your son, because he had the biggest heart.&#8221;

Cooke&#8217;s mother, Georgia, and wife, Dagmar, are the first to stay in the newly dedicated guest house, which has been decorated with memorabilia from Cooke&#8217;s service in uniform.

&#8220;Because we were inspired by his actions, we dedicate this guest house so that others may be inspired as well,&#8221; said Dempsey.