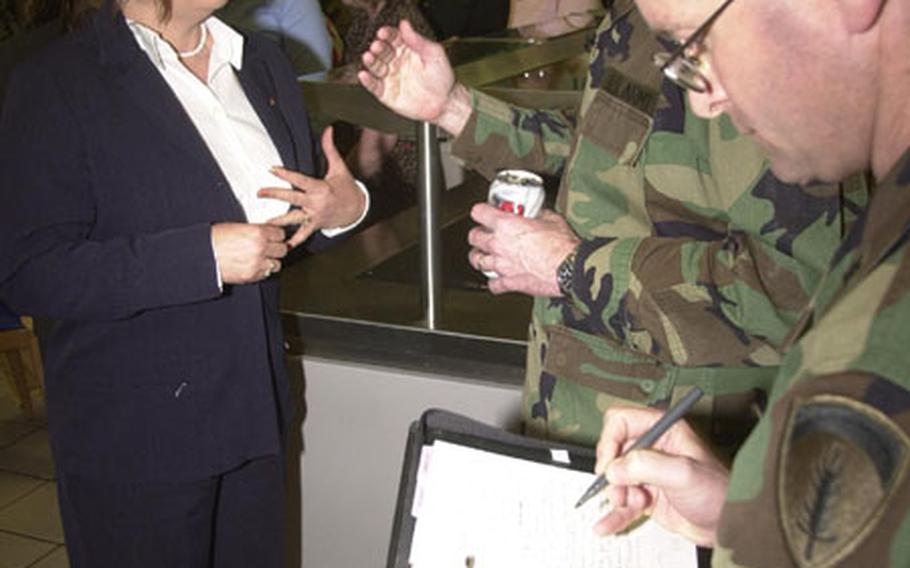 An aide jots down notes as Gen. B.B. Bell, commander of Army forces in Europe, gets an earful from 1st Armored Division spouses in Baumholder, Germany, whose husbands have been extended in Iraq for an extra four months. (Jon R. Anderson / S&S)

An aide jots down notes as Gen. B.B. Bell, commander of Army forces in Europe, gets an earful from 1st Armored Division spouses in Baumholder, Germany, whose husbands have been extended in Iraq for an extra four months. (Jon R. Anderson / S&S) 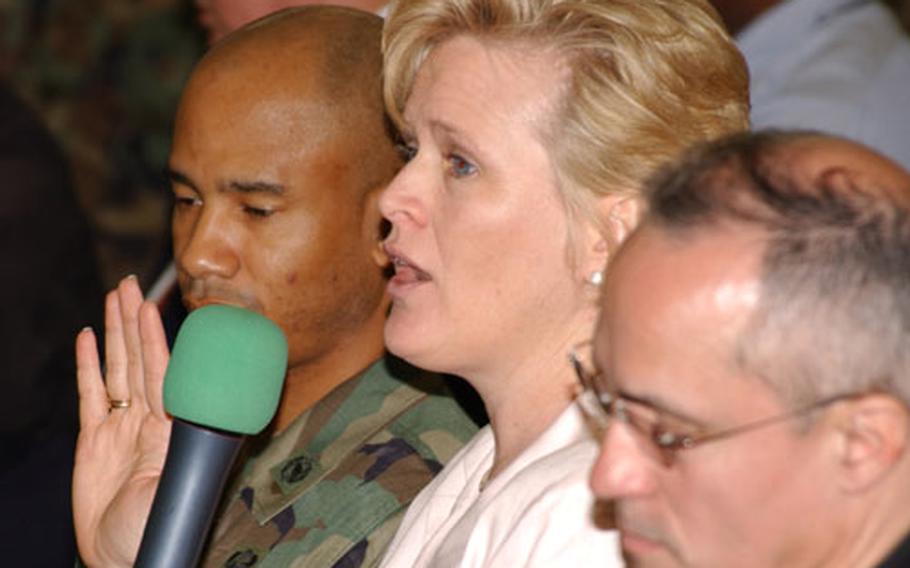 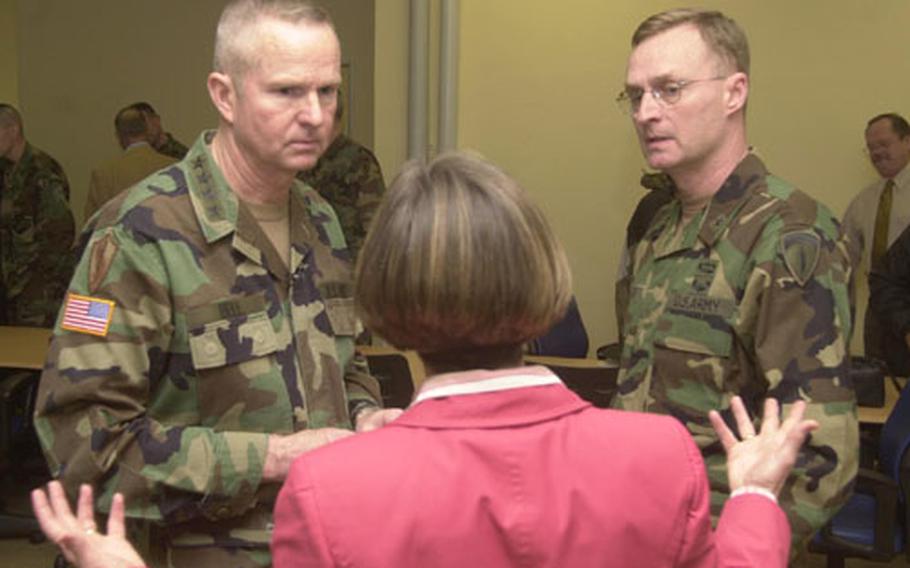 In the wake of a four-month extension to the division&#8217;s combat tour in Iraq, Gen. B.B. Bell brought his top support staff in to deliver that message personally and tackle concerns, gripes and questions from family support leaders while, in separate meetings, issued stern marching orders to rear detachment commanders and local base officials to take care of the families.

Sitting on orange picnic tables in the Friedberg Fitness Center, family members, some rocking babies in strollers or cradling them in their arms, listened earnestly as Bell promised problems would be fixed.

Bell said he would reconvene his staff on Wednesday to run down the list of every issue raised and make sure that action was taking place.

Meanwhile, like only a four-star commander can, Bell fixed many individual problems on the spot, while jump-starting fixes for wider issues.

One rear detachment soldier told him that the Army was trying to send her away from Germany to her next duty assignment before her husband, also a soldier, returns from duty in Iraq.

In Baumholder, one spouse complained there wasn&#8217;t enough busing for children in the outlying areas.

Those were the kinds of scenes repeated throughout Friday as Bell bounced from Friedberg to Baumholder, which are two of the division&#8217;s largest communities.

Among the issues Bell addressed:

&#8226; Airline refunds &#8212; Scores of spouses have had trouble getting refunds on tickets bought for vacations that will now have to be postponed. Many more have to pay penalties. Bell said U.S. carriers have been largely cooperative in waiving those rules, but some foreign operators have been more difficult. &#8220;We&#8217;ve got to go to these airlines and get the power of the U.S. government behind this,&#8221; Bell told a staff officer.

&#8226; Chaplains &#8212; &#8220;I know we have a chaplain and social worker problem,&#8221; said Bell. The reason, he said, is that as 1st AD was preparing to come home, 1st Infantry Division was on its way to Iraq and so counseling resources were shifted over. Bell&#8217;s top chaplain, Col. Kenneth Leinwand, promised more help would be found.

&#8226; Block leave &#8212; Many soldiers and family members have asked for an extended block leave period, beyond the standard 30 days built into USAREUR&#8217;s reintegration program for returning units. The 1st AD division commander, Maj. Gen. Martin Dempsey, has recommended against that. &#8220;He needs to put the division back together,&#8221; said Bell. Instead, Dempsey has requested &#8212; and Bell has approved &#8212; 30 days of leave when the division returns plus another 15-day period over the Christmas holidays.

&#8226; Sport schedules &#8212; One wife in Friedberg complained that the local schools were releasing the times for sporting events only within 24 hours of the games.

&#8226; Space-A &#8212; Tasking one of his staff officers to try to persuade the Air Force to waive its rules for free space-available flights, Bell said: &#8220;Why are we Cat. 3 still?&#8221; The division families, he said, should be Category 2, which would bump division family members up the priority list.