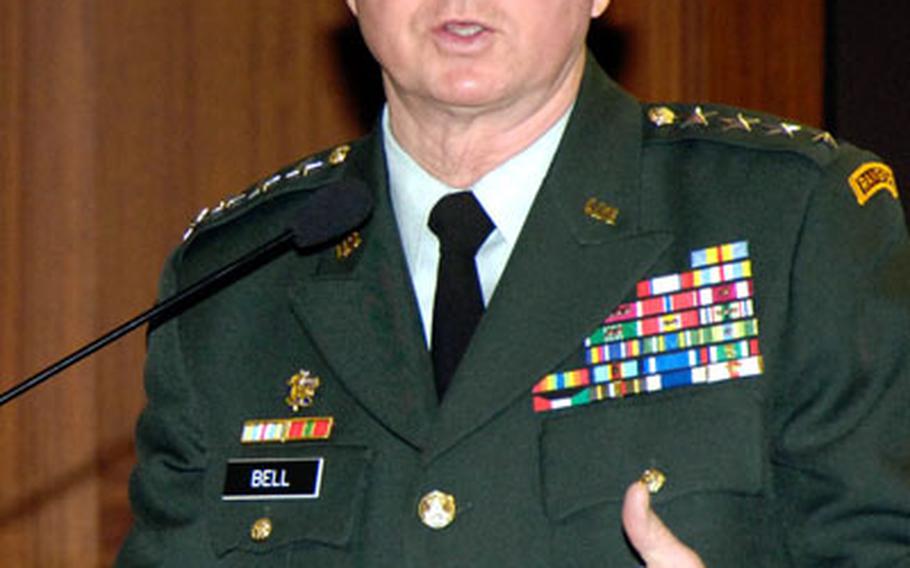 Bell was responding to reports that relocating USFK troops from Seoul and Area I bases to Pyeongtaek&#8217;s Camp Humphreys could be delayed until as late as 2013.

Currently, most servicemembers spend their time in South Korea on single, unaccompanied tours.

Bell also expressed surprise that the South Korean government had not consulted with USFK before announcing the potential relocation delay to South Korean media.

Bell also said that South Korean base worker layoffs are a possibility because of a funding shortfall, though he called it &#8220;extremely problematic because they contribute to my readiness.&#8221;

Last month, South Korea agreed to pay about $789 million to share costs of USFK&#8217;s operations with the U.S., and the same amount with an inflation adjustment in 2008. That figure is significantly below USFK&#8217;s minimum operating needs, Bell said.

Contracts with South Korean businesses and some construction projects also could be cut, he said.

When asked about recent reports that North Korea might be readying another nuclear test, Bell declined to discuss current intelligence data. However, he said he expected North Korea to test another weapon &#8220;someday.&#8221;

He then reiterated what he asserted following the first nuclear test: Should North Korea ever attack the south, the Combined Forces Command would respond quickly and win decisively.

Bell also addressed wartime troop control and the future of the United Nations command, both of which he leads.

The issue of returning wartime troop control to South Korean leadership has been hotly contested. Many of the South Korean government&#8217;s liberal elements have called for a swifter return of control, while conservatives and several former army generals are opposed to transferring control.

After President Roh Moo-hyun asked for troop control by 2012, U.S. officials said the transfer could be completed as soon as 2009.

Whatever the outcome, Bell called for continuity, saying, &#8220;Whoever is in charge during an armistice probably ought to be in charge during war, so there is a seamless unity of effort for military operations.&#8221;

The group dubbed the event the &#8220;2007 anti-America, anti-war rally,&#8221; police said. The protesters then moved to nearby Hyochang Park for a rally.

Five hundred riot police were sent to the scene, police said. No one was reported injured.