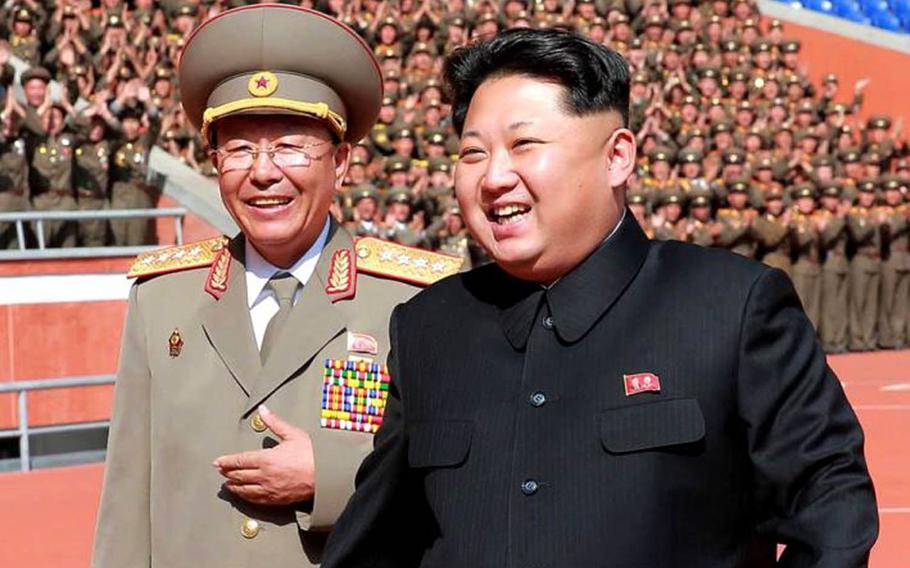 North Korean leader Kim Jong Un, right, is seen with North Korean general Ri Yong Gil in this undated photo from the Korean Central News Agency. The general, who was believed to have been executed earlier this year, is apparently alive and back in a senior military position, South Korean officials said Tuesday, May 10, 2016. (Courtesy of KCNA)

SEOUL, South Korea — A North Korean general, believed to have been executed earlier this year, has turned up alive at the country’s first ruling party congress in nearly four decades.

It was widely reported that the North’s leader, Kim Jong Un, had his military chief of staff Ri Yong Gil executed in February on corruption charges as part of a wave of killings and purges aimed at consolidating his hold on power.

South Korea’s Unification Ministry confirmed that it appears he is the same person, saying Ri can also be seen in a picture from the party congress that ended Monday.

“It seems that he was purged before but not executed,” a ministry official said, speaking on condition of anonymity.

The general’s reappearance was one of several changes that emerged as news trickled out about the four-day Workers’ Party Congress – the first since 1980 when North Korea’s founding father Kim Il Sung was still in charge.

The leader’s youngest sister, Kim Yo Jong, also was elected as a member of the party’s 129-member central committee, according to KCNA.

Kim Jong Un, who presided over a massive parade Tuesday, has used the high-profile assembly to hail successes on the nuclear front after the isolated country staged its fourth atomic test along with a long-range rocket launch that prompted a fresh round of harsh U.N. sanctions.

He also announced a five-year economic plan aimed at boosting the nation’s standard of living.

Experts say the main aim of the congress was to boost the personality cult surrounding Kim and firmly establish him as leader.

“People outside North Korea might have expected more details on strategy and a clearer economic policy line,” said Paek Haksoon of South Korea’s Sejong Institute. “This was a true restoration of the status and the role of the leader and the party.”

Chinese President Xi Jinping congratulated Kim on his new title of chairman of the Workers’ Party, according to the official Xinhua news agency. Xi, who is also head of China’s ruling Communist Party, stressed the “great importance” of ties between the two countries.

Their relations have soured in recent months after China signed onto the sanctions against North Korea over its nuclear program.