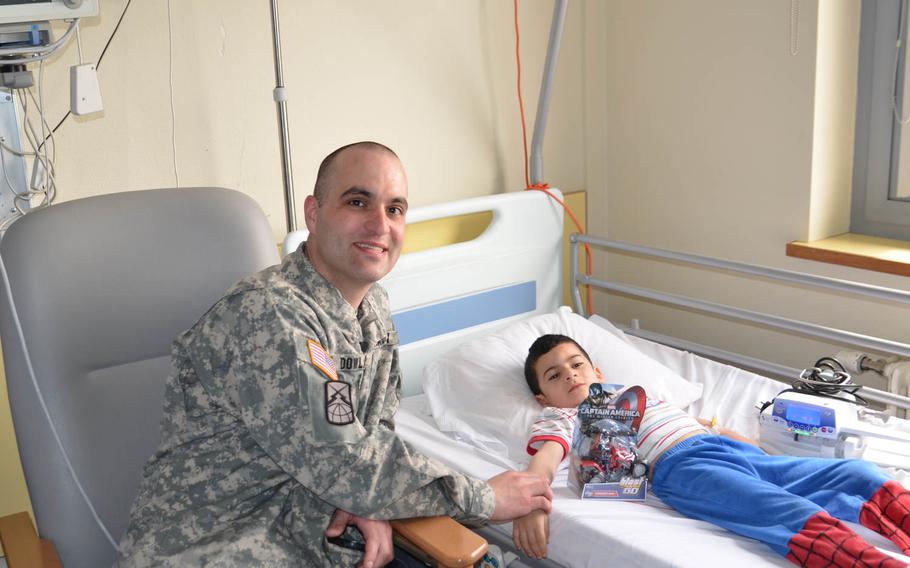 First Sgt. Jared D. Dowland, a soldier based at Supreme Headquarters Allied Powers Europe in Mons Belgium, rescued a five-year-old boy, named Mahmud, on Sunday, April 20, 2014. The boy had apparently fallen into a park lagoon and lost consciousness. Dowland provided CPR to resuscitate him and later visited him in the hospital. (Courtesy Jared Dowland)

First Sgt. Jared D. Dowland was planning a relaxing Easter Sunday at the Jemappes park, a lush pastoral spot just outside of Mons, Belgium, with flowers, a lagoon and a lovely chateau.

A soldier with the 128th Signal Company at Supreme Headquarters Allied Powers Europe, Dowland was kicking back as his three sons ran off to the playground when he noted a commotion about 50 yards away. At first he ignored it, he said in a telephone interview, but then it became clear something was wrong. A young child, dripping wet, was surrounded by a crowd of people near the water’s edge as someone pressed on the boy’s stomach.

“You have to do something,” said Dowland’s wife, Marie. “Get over there and save him.”

Dowland said he found the boy unconscious and not breathing, his skin pale.

“Everything about this boy’s appearance told me he was dead, he was in the water too long before he was discovered, and that reviving him was probably not possible,” Dowland said.

As those thoughts raced through his head, Dowland said he fell back on his training, employing life-saving techniques learned years ago as a new recruit. He started chest compressions, followed by a breath of air.

“I pinched his nose and the first breath was hard to force in,” Dowland said. “Then I instructed the father to push, so that he could do the compressions.”

With the second breath, the boy’s chest rose a little. He heard a gurgle, a possible sign that the air went to the stomach. He again recalled his training: Tilt the head back farther to open the airway.

Still worried that air was entering the stomach, Dowland started losing hope. He felt himself welling up with tears. But he pressed on.

After what felt like many minutes, water began shooting from the boy’s nose. After turning the boy’s head to the side, and wiping his mouth clean of mucus, Dowland gave another breath. Water spit out once more. After a couple more rotations, color started to return to the boy’s face.

“He’s going to be all right,” Dowland shouted.

After the rescue, Dowland shared his account with Belgian authorities, who thanked him for stepping in. Apparently, two other attempts by bystanders to resuscitate the boy had failed before Dowland arrived. As Dowland tried to save the boy, people were calling out in French to stop, that it was hopeless, Belgian authorities told Dowland.

“I’m glad I couldn’t understand them,” he said.

Leaders from Dowland’s unit credited the soldier for stepping in, saying his actions should serve as an example for all soldiers. Dowland said the rescue was a reminder that soldiers are trained to help, both on and off the battlefield.

Dowland visited the boy later in the night at the hospital and again the next day.

He learned the youngster’s name was Mahmud.

“The father kissed me on both cheeks,” Dowland said. “It was very emotional.”