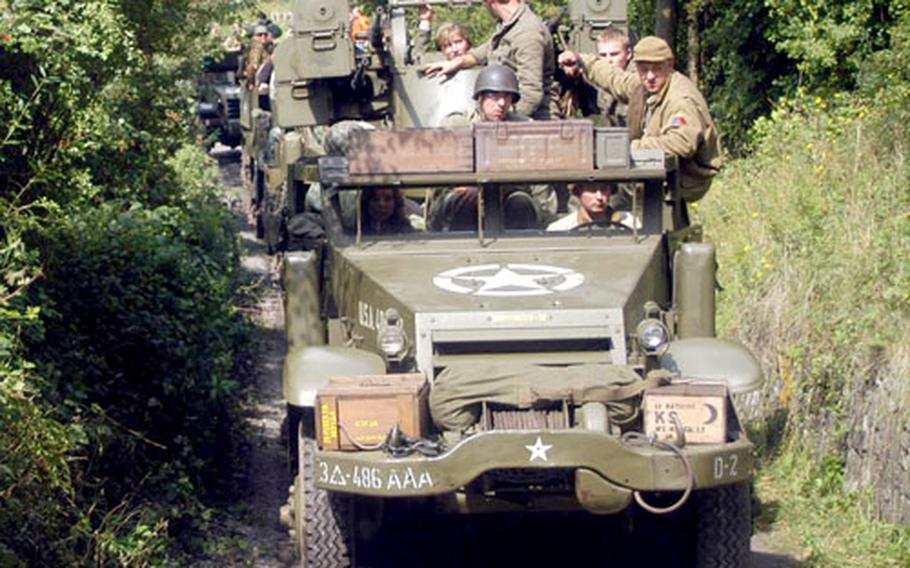 Besides the monuments and plaques, Belgians remember U.S. troops from World War II in other ways. The annual Tanks in Town rally in Mons, Belgium, which is the capital of Hainaut Province, drew hundreds of participants this year, many of whom dressed in WWII garb. (Courtesy of Cis Spook)

A Belgian military association is organizing a three-day camping trip that may be of great interest to Americans, particularly servicemembers. But there&#8217;s more to the trip than a full cooler and a flaming campfire.

Even to this day, despite differing views on some issues, such as Iraq, Belgians remain grateful of the effort and sacrifices of the U.S. military, particularly in World War I and World War II. And that gratitude is displayed year after year, whether it&#8217;s at the annual commemoration of the Battle of the Bulge or the liberation of Belgium or the red-carpet treatment bestowed upon visiting World War II veterans.

But before anyone reaches for next year&#8217;s calendar, hold tight. The re-enactment won&#8217;t take place until July 4-6, 2008. It is tentatively scheduled to be held at Beauvechain, a Belgian air force base near Brussels, though some details remain to be organized.

Still, organizers, which include several military re-enactment groups in Europe, opted to put the word out early to give interested parties time to plan ahead. Spook said it doesn&#8217;t matter if it&#8217;s one person or one unit, nor do organizers care if someone is new to the re-enactment scene.

While the event is in the early planning stages, the scene organizers hope to paint is that of a large bivouac, or temporary encampment.

As visitors move through the camp they would chronologically pass from one era to the next, from the Revolutionary War to the War of 1812 to the Civil War, and on and on. Participants would wear period military uniforms and display the weapons, wares and tactics of that particular era.

Unlike some re-enactments, however, there won&#8217;t be any battlefield performances.

Organizers expect no shortage of World War II imitators. As Larscheid pointed out, there is always an abundance of them, especially in Europe. What concerns the group more are the earlier periods, starting with World War I and going back. And re-enactors from the Korean War often are in short supply, too.

For more information, e-mail them at: us2008@jemesouviens.fr