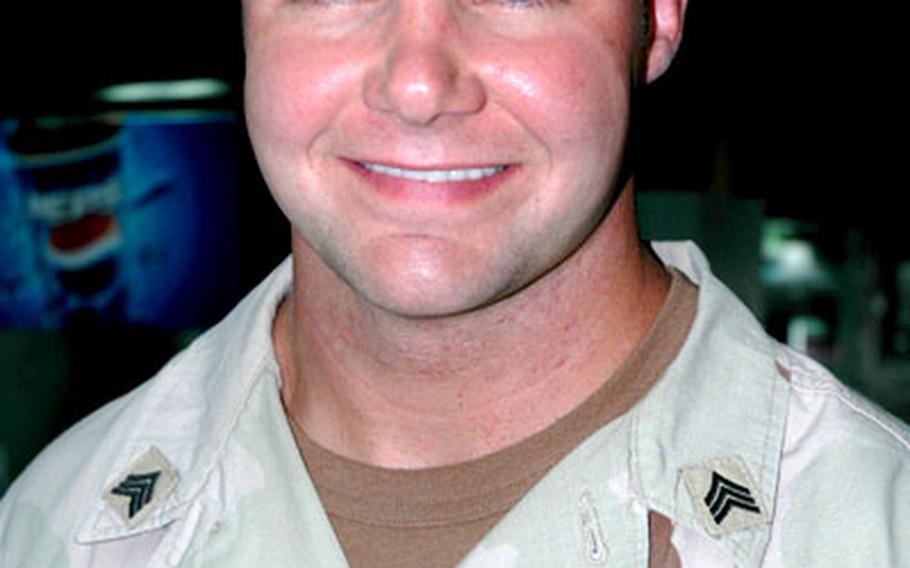 ALI AL SALEM, Kuwait &#8212; In high school, Matt Kellum told his parents they would one day see him on the football field at Auburn University. The very next year, he was in uniform for the Tigers.

Kellum hoped that one day he could play in the National Football League, too. And during his rest and recuperation leave from Kuwait in June, he came one step closer to making it happen.

During his leave, Kellum auditioned at the Scout Camp Pro Football Regional Combine in California during a daylong event at Azusa Pacific University&#8217;s Cougar Stadium. In the last 17 years, the combine has produced more than 2,100 players in the NFL, NFL Europe and Canadian Football League.

When Kellum took the field, the stands were filled with fans, for whom he and the other athletes later signed autographs.

As a high school player in Alabama, Kellum played defensive end and place-kicker, moving to offensive tackle at Auburn. In California, he joined 27 other players competing for a chance as place-kickers.

And though the field was full of athletes, Kellum, 25, said each one&#8217;s only competition was himself. Each player was rated on kicking and field goals, not his performance as compared with the others. Making the cut meant the players would attend another combine the following week with an audience of NFL scouts watching.

But as a walk-on player at Auburn, Kellum was never given a scholarship and his playing time was limited. The attacks of 9/11 sparked a new energy in him.

&#8220;I felt bad not contributing,&#8221; he said. His father was retired military, so Kellum decided to put school and football on hold, and follow in his father&#8217;s footsteps.

He completed one tour in Iraq, and was home just long enough to pack for a second deployment to Kuwait. But, football continued to call.

Kellum applied to the combine program and was accepted. He began training in the desert heat of Kuwait, sometimes lifting fuel cans as part of his workout and setting up field goal posts in the sand.

His unit was the first to support him, he says. Then, fellow troops found out and cheered him on.

In California, Kellum said he gave it his all, but he didn&#8217;t quite make the cut.

So Kellum headed back to Kuwait. But he&#8217;s not giving up on his NFL dream. Soon after his deployment ends, he&#8217;ll return to Auburn to finish a bachelor&#8217;s degree in exercise science. He plans to earn a doctorate in physical therapy.

He says he hopes his trip will inspire other soldiers to stop sitting around and take a chance on chasing a dream they&#8217;ve put aside.

Kellum is far from shelving his NFL dream. Now that he&#8217;s been accepted to the combine once, Kellum said he can try out again. And he will.

Allison Perkins is a freelance writer living in Kuwait.