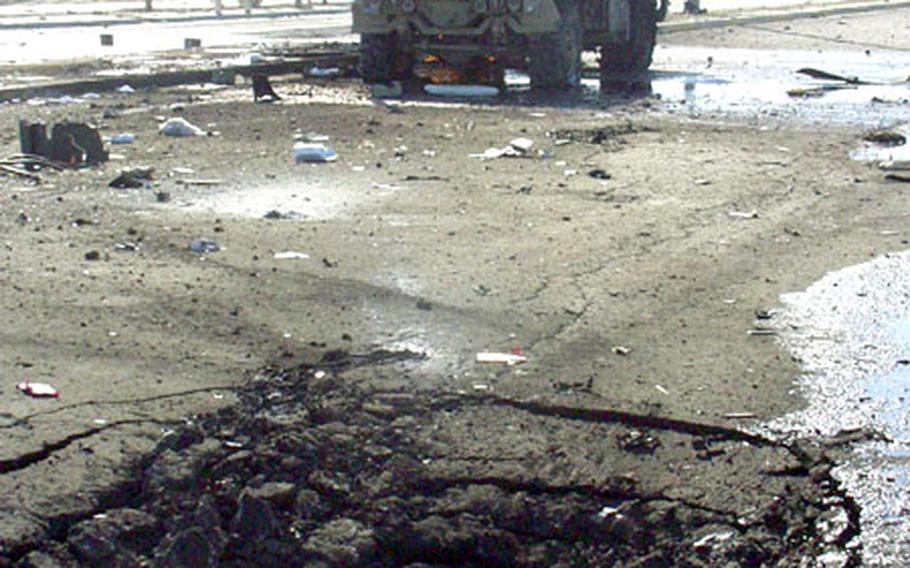 A deep crater in the pavement on Highway 1 shows where the suicide car bomb detonated, destroying the U.S. military truck in the background. (Steve Liewer / S&S)

An Iraqi traffic policeman, Dafer Salim Nejriss, had stopped traffic on a side street while the convoy passed.

As the lead vehicle &#8212; a military truck called a Lightweight Mobile Tactical Vehicle, or LMTV &#8212; crossed the intersection, a Toyota at the head of the line of waiting vehicles on the side street pulled around the policemen next to the truck and lay down on the front seat.

&#8220;When the American convoy passed, he blew it up,&#8221; Nejriss said later through a translator from his hospital bed.

The LMTV rolled to a halt about 100 feet down the road, on fire near the driver&#8217;s side door. The driver and passenger, both Air Force airmen attached to the 167th Corps Support Group in Tikrit, somehow escaped with bruises and minor shrapnel wounds.

A soldier from Company C, 1st Battalion, 77th Armor Regiment, attached to Task Force 1-7, who was in a nearby tank, also suffered minor injuries. Medics took all three to the 67th Combat Support Hospital in Tikrit, but McClelland said all three were expected to return to duty later in the day.

McClelland and Command Sgt. Maj. Wayne Sanders, the task force&#8217;s senior noncommissioned officer, piled into Humvees and raced to the site after checking on the wounded troops. They inspected the area, then met briefly with Beiji&#8217;s mayor before visiting the city&#8217;s single-story hospital.

Anxious Iraqis crowded the lobby and hallway, waiting for word on the fate of loved ones. Many of the injured were workers at the city&#8217;s large oil refinery who had been riding to work on a bus that was in line behind the suicide bomber.

McClelland had used tanks to block off daytime traffic on Highway 1 in the city since Nov. 17, when a similar car bomb attack killed 10 Iraqis and injured 23 people, including three U.S. soldiers. Traffic hadn&#8217;t been halted on side streets, however.

Beiji, a city of 125,000 residents 155 miles north of Baghdad that is home to two major power plants and an oil refinery, had been relatively peaceful until the past month. Insurgent attacks on Army patrols started large battles Nov. 9 and Nov. 14 that caused heavy damage to the city&#8217;s business district.

And on Nov. 13, rebels blew up a key bridge on a highway bypass near Forward Operating Base Summerall, forcing the Army to route convoys through the heart of the city. They also planted at least 60 roadside bombs during the month, more than twice as many as in any previous month in the past year.