Behind the scenes of a presidential visit 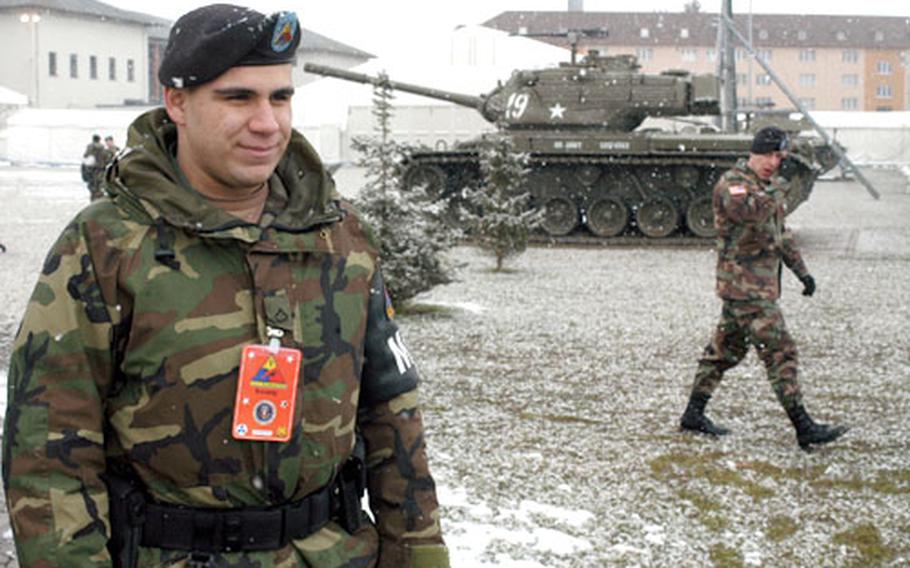 Pfc. Jason Epstein of Wiesbaden’s 501st Military Police Company shows the other side of a presidential visit — extra guard duty at points all around the base. But Epstein had it better than some: members of the German police were seen on autobahns near the base Wednesday, performing lonely foot patrols along highways leading into the facility. (Ben Murray / S&S)

Stocking up on supplies before President Bush&#8217;s visit was one of the little things troops at Wiesbaden Army Airfield said they had to do as security around the base tightened over the past two weeks, said Jena Mullican, a military spouse who lives near the airfield.

Streets were blocked and some regular services were shut down Wednesday in the city, where rings of security had isolated the military airfield for 12 hours before the president arrived.

No crowds of flag-waving admirers were on hand to greet him. For security reasons, residents were asked to restrict their movements Wednesday. Wiesbaden&#8217;s streets were devoid of everyone but military police and soldiers who went about their business in golf carts because cars were banned.

But the strict security couldn&#8217;t contain troops&#8217; excitement as they waited at the airfield for Bush and his entourage, including the first lady and Secretary of State Condoleezza Rice.

Both Hunter and Mullican said they hadn&#8217;t slept well Tuesday night in anticipation of seeing the president.

The mood was even enough to take the edge off of a lonely guard duty on the base&#8217;s central parade field, said Pfc. Jason Epstein of the 501st Military Police Company. Epstein was standing in the snow within earshot of a Frankfurt Galaxy cheerleader troupe performing a dance routine in a large tent on the base&#8217;s softball field. But Epstein said he wasn&#8217;t disappointed about missing all the action.

Others said they put in extra hours or were asked to change duties completely to help out at the event.

Hunter, who normally manages the battalion&#8217;s supplies, was working as a media liaison Wednesday.

Others were worried about simpler problems than protecting a president.