Before and after: Aerial photos show storm-ravaged Tyndall Air Force Base 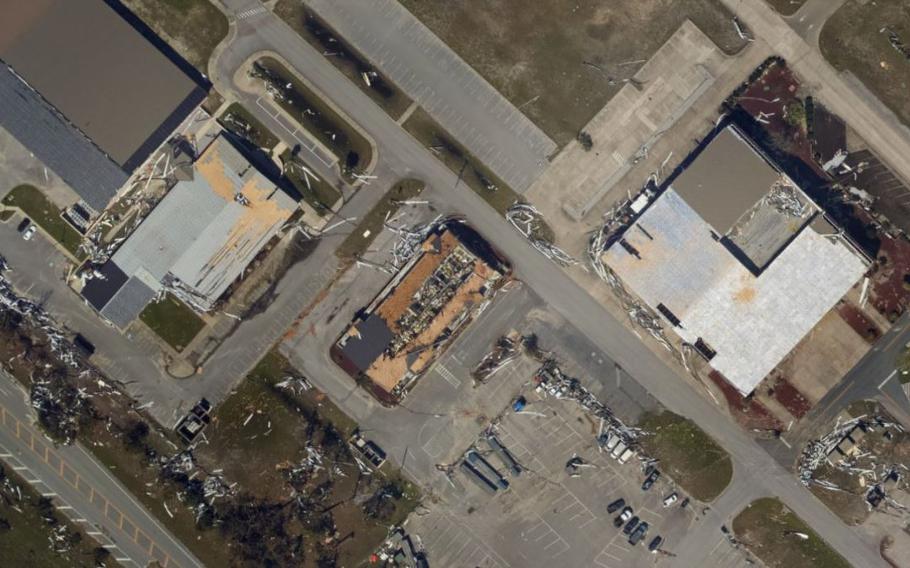 A roof damaged by Hurricane Michael is shown in this National Oceanic and Atmospheric Administration image. (NOAA)

Aerial photos from the National Oceanic and Atmospheric Administration provide a wrenching overview of the damage from Hurricane Michael at Tyndall Air Force Base in Florida.

The Category 4 storm, the strongest to ever hit the Florida Panhandle, mangled many buildings at Tyndall, located just outside Panama City, Fla., according to Air Force officials who reported “widespread catastrophic damage” primarily from winds that exceeded 150 mph.

“Team Tyndall, our base took a beating," Col. Brian Laidlaw, the 325th Fighter Wing’s commander, said in a message posted Thursday on the base Facebook page. The images — of huge sections of roofs ripped off buildings, vehicles scattered and debris everywhere— show the extent of the damage.

The individual NOAA images were put together into a large mosaic, and those looking for a certain area of the base can zoom in for a closer view here. We've put together Google maps from before the storm and NOAA images of the same areas to show the damage.

Buildings before the storm

Buildings after the storm

Flightline area before the storm

Flightline area after the storm

Maxwell Flag Park before the storm

Maxwell Flag Park after the storm

According to the NOAA, the imagery was acquired by its Remote Sensing Division to support NOAA homeland security and emergency response requirements.

Other images and footage have been circulating after Tyndall, including aerial footage after the storm on the WXChasing YouTube channel.

An Associated Press photographer visited Tyndall on Thursday, capturing trees snapped like matchsticks and a damaged gate and hangar.