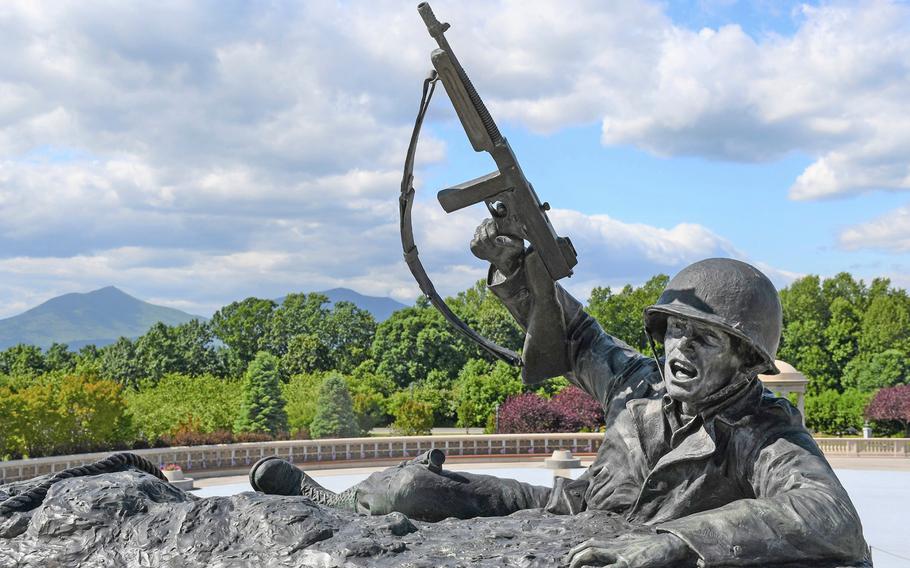 The National D-Day Memorial in Bedford, Va., on May 14, 2019. Bedford, the small community near the Blue Ridge foothills, was chosen as the site of the memorial because of the its disproportionately high losses during the invasion of Normandy. ( Nikki Wentling/Stars and Stripes) Ken Parker points toward the photos of 19 men, known as the 'Bedford Boys' who were killed in action during the invasion of Normandy. The photos take up one wall of the Bedford Boys Tribute Center, which Parker and his wife, Linda, opened in May in downtown Bedford, Va. Nikki Wentling/Stars and Stripes (NIKKI WENTLING/STARS AND STRIPES) A two-level, corner brick building in the center of Bedford, Va., used to house Green's Drug Store, where families gathered in 1944 to learn whether their sons, brothers or husbands were missing or killed in action on D-Day. In May 2019, the building opened as a cafe and tribute center to the 'Bedford Boys.' Nikki Wentling/Stars and Stripes (Nikki Wentling/Stars and Stripes) 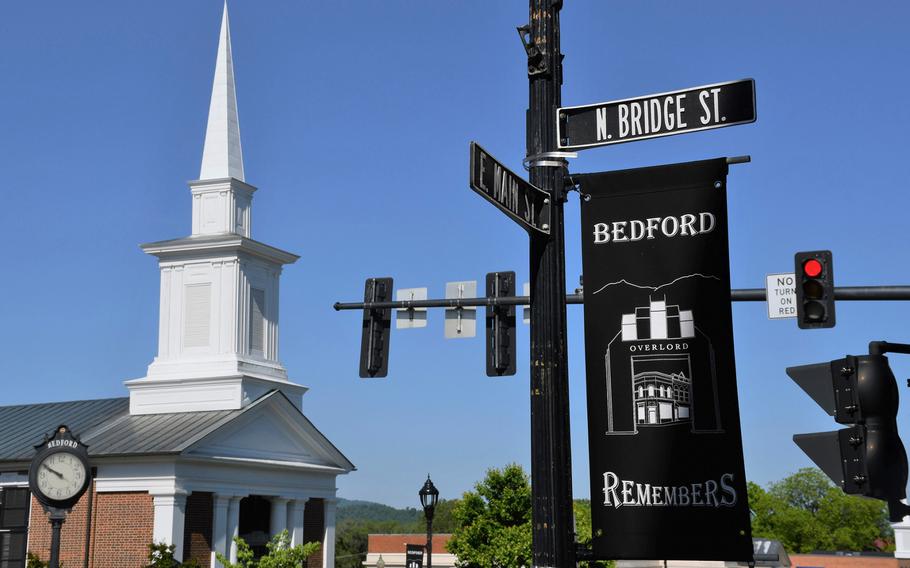 Bedford Presbyterian Church shown on May 14, 2019 in downtown Bedford, VA. In July 1944, the church housed farming families who gathered in Bedford to learn whether their sons, brothers or husbands were killed in action during the invasion of Normandy. (Nikki Wentling/Stars and Stripes)

Western Union clerk Elizabeth Teass sat at a Teletype machine near the back of Green&#8217;s Drug Store just after 8 a.m. on July 17, 1944, when the first telegram came through.

Until that point in the war, Teass was accustomed to receiving about one telegram each week informing families in Bedford, Va., and the surrounding area that their sons, brothers or husbands were missing or killed in action. That day, she received 11.

Word spread quickly after the initial telegram, and the county reeled at the news.

Bedford, then a close-knit community of fewer than 4,000 people in the Shenandoah Valley, was home to Company A of the 116th Infantry Regiment, 29th Division. The Army National Guard unit was called into federal service when the United States entered World War II, and 37 men from Bedford joined the fight.

The community suspected that Company A was involved the Allied invasion of Normandy, France, on June 6. More than a month later, the sheer number of telegrams served as confirmation.

The telegrams kept coming Tuesday, Wednesday and into Thursday afternoon.

Farming families poured into the center of the town, seeking information about their loved ones. They paced between Green&#8217;s Drug Store and the Presbyterian church across the street, where many of them slept that week.

Green&#8217;s, with its popular soda fountain, was the hub of Bedford &#8212; a place the men who went off to war had worked and socialized. One of them, Staff Sgt. John Schenk, had his first date there with his future wife, Ivylyn.

That week, though, the two-story brick building on Main Street became a makeshift command post. It was there that the town eventually learned that 20 of its residents were dead, 19 of them from Company A.

Bedford&#8217;s loss was so unconscionable that the town would later be chosen as the site of the National D-Day Memorial, which opened in 2001 and pays tribute to all Allied forces that participated in the invasion.

Seventy-five years after the D-Day invasion, Parker, 75, and his wife, Linda, 70, have transformed the old Green&#8217;s building into a space honoring the 20 men who died and those who returned.

The corner brick building sits at the highest point of Main Street in Bedford, the Blue Ridge Mountains foothills visible to the west, the Presbyterian church with its tall white steeple still across the road.

Straight ahead through the main entrance is a caf&#233; with a dozen tables, the same spot that used to house the old soda fountain. To the right is the Bedford Boys Tribute Center &#8212; one room containing photos of the Company A soldiers, artifacts from the families and descriptions of what happened to the unit on D-Day, being in the first wave of U.S. forces to hit the shore.

Unlike the National D-Day Memorial, which sprawls across 88 acres atop a hill above Bedford, the tribute center is modest, but personal.

The Parkers arrived in Bedford last year as outsiders. They moved 1,200 miles from Newcastle, Okla., drawn in by the town&#8217;s history.

Ken Parker first heard of Bedford and its tragic legacy in the 1980s. Last year, while preparing for a trip to the Normandy American Cemetery and Memorial, he read two books about the Bedford Boys. That&#8217;s when the couple decided they should reach out to surviving family members in Bedford to ask whether they wanted any artifacts to be placed at the D-Day site in France.

The Parkers wrote a two-page letter and distributed it to churches around Bedford in April 2018. Two weeks later, their phone began to ring.

In July, they traveled to Bedford on what was supposed to be an extended research trip for a book of profiles they plan to write about the Bedford Boys. They stayed several weeks, and when the building that had once housed Green&#8217;s Drug Store went on the market in October, they bought it.

The center officially opened in May, just in time for a week of D-Day anniversary events the town will host in early June. The Parkers believe it serves as a symbol for a town that&#8217;s finally healing &#8212; 75 years after the event that destabilized it.

While the community wasn&#8217;t wallowing in grief, many of the affected families were keeping their stories private, Parker said. In many cases, the parents of the men killed in action kept their belongings in boxes &#8212; too painful to bring out in the open. The siblings who inherited the boxes also kept them closed, treating them as sacred.

Now that they&#8217;ve been handed down to nieces and nephews, things are beginning to change. The Parkers saw this during one of their interviews, when one nephew found and opened a stack of letters his grandmother had sent to his uncle before she knew he had been killed.

Some families shared their keepsakes for display at the tribute center.

There are high school class rings, Purple Hearts and original copies of the KIA telegrams.

An acoustic guitar that Pfc. Jack Gilbert Powers took with him to Europe sits behind a glass case. One family shared a military trunk belonging to Lt. Elisha Ray Nance, who returned from World War II and was the last surviving member of Company A before he died in 2009.

&#8220;I think it took the opening of this tribute center for a lot of families to sit around and have these conversations, pull together what they had and bring it to a place where it&#8217;s going to be remembered,&#8221; Banner said. &#8220;It never would&#8217;ve happened. Things would&#8217;ve stayed in closets, under beds, in basements. The whole family is engaging in dialogue that had never been open before.&#8221;

The highlight is a Western Union Teletype &#8211; the same machine Elizabeth Teass sat behind in 1944 as it printed out the telegrams that would change a town.