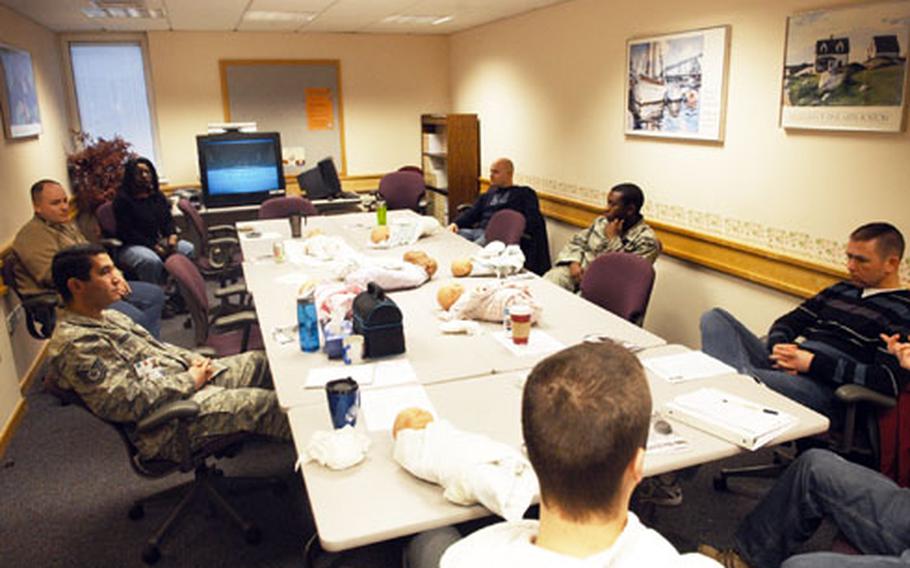 Dads-to-be glean insight into fatherhood last month during a Dads Class, part of Family Advocacy’s New Parent Support Program. The class lets them sit down together and hash out their questions. (Geoff Ziezulewicz/S&S)

RAF LAKENHEATH &#8212; Who knows if Gen. George S. Patton ever actually held a baby. The military legend might have been too busy helping to save the world from the fascist hordes during World War II.

Lindblom was joined by a handful of other airmen during the Dads Class, part of Family Advocacy&#8217;s New Parent Support Program.

In the past, expectant dads might not have had avenues through which to discuss their hopes, fears and uncertainties about the coming baby &#8212; everything from changing diapers to how their relationship with their wife may be affected.

The class lets them sit down together and hash out their questions with a father leading the session, family advocacy nurse Barbara Wright said.

"It is men talking to men, that whole idea that iron sharpens iron," Wright said.

The classes teach certain cornerstone lessons, like how to bathe a baby and what to do when they just won&#8217;t stop crying, Wright said, but it also lets the men bounce ideas off each other.

"How a dad interacts with his child is different than how a mom interacts," she said. "He can be all the man that he is and still be a nurturing father."

Capt. Paul Jones, a father of four, is currently teaching the class and said the "boys only" style lets guys really open up about their shared concerns.

"In this environment, it surprises me how much they say," he said.

Sometimes, all the pre-delivery attention is focused on mom, and the baby&#8217;s impending arrival is sometimes not apparent to dad until they see an ultrasound or feel the baby kick, Wright said.

During a class session last month that included a discussion on how hand-me-downs can stretch a clothing bill, Lind-blom said he&#8217;s taking the class for the sake of his baby.

"Mistakes I make could affect this person their whole life," he said. "I owe it to her to set her up for success."

While new dads may come in with a host of questions regarding the bundle of joy that will soon change their life forever, they can also get tuned into issues they didn&#8217;t even think about.