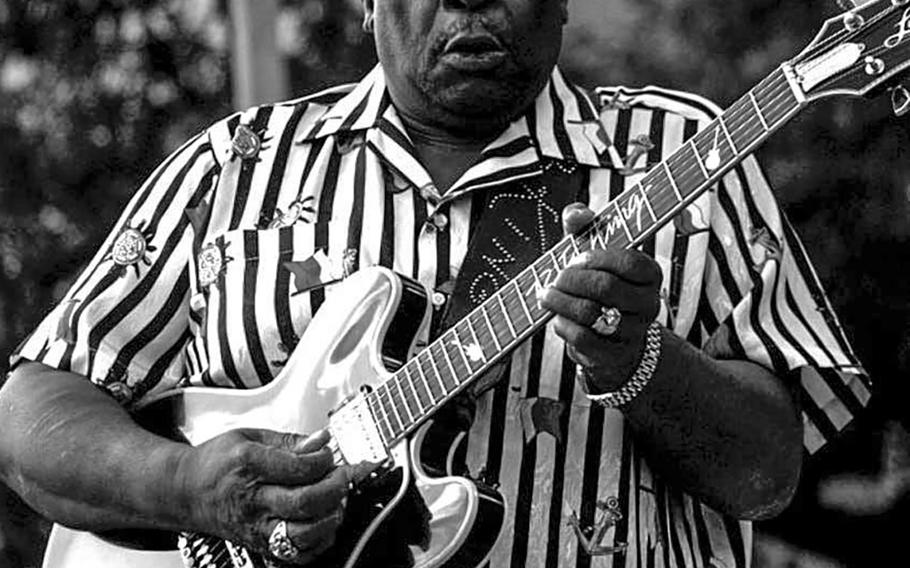 Buy Photo
Service members at Tuzla Air Base, Bosnia and Herzegovina, cheer for B.B. King during a show in July, 1996. (Chuck Gohl/Stars and Stripes) TUZLA, Bosnia and Herzegovina — B.B. King gave a taste of the blues to those troops who may be going through their own "blues" as Operation Joint Endeavor heads into its eighth month.

"This is very special to me. It's special to be allowed to do this," King said to reporters shortly after arriving at Tuzla Air Base in Bosnia and Herzegovina aboard a U.S. Air Force C-130 Hercules. "I like to meet people and make them happy."

For a man who has earned just about every national arts accolade there is —including induction into the Rock 'n' Roll Hall of Fame and a Grammy Lifetime Achievement Award — and has traveled worldwide to perform in hundreds of countries, it's hard finding something new and special to do.

Yet out of the 300-plus shows he does a year, this was his first USO-Department of Defense Overseas entertainment sponsored show.

"I'm proud to be an American. The troops here are always doing the best they can do," he said, adding, "It's something I want to do, and hopefully they want it; and if the soldiers really want it, they're going to get a good earful."

Judging by the cheers from the nearly 600 fans at the air base snow last week, they wanted it.

King performed two concerts for troops participating in the peacekeeping mission — one at the air base, the other at Kaposujlak Air Field, Hungary.

The mild-mannered, gracious blues guitarist, who was a soldier himself back in 1948, opened the concert with Let the Good Times Roll.

He and his seven-man band played a medley of some of their greatest hits, Nobody's Business, Nobody Loves Me But My Mother and The Thrill Is Gone, which drew the most cheers.

Some in the audience laughed, some applauded as he sang, " .,. nobody loves me but my mother, and sometimes I think she's jivin'."

For U.S. troops coping with various restrictions, having King come was a welcome relief to the monotony of the deployment.

"This is just what the troops needed," said U.S. Army Capt. Sandi Manus. "There's nothing like the blues to bring people together — everybody can relate to hard times."

"I think it's great; everybody knows him," said Eagle Base soldier Cpl. Mark Stith.

"The blues helped me get through college when I got down because of my grades/' said Capt. Steve Letzring, who came to the concert from Camp Wellington, which is about two miles north of the town of Cradacac.

"Listening to him sing the blues is like talking to your buddy; it consoles you," Letzring said.

One man claimed he was King's No. 1 fan.

"B.B. is the blues because he sings from the soul. I'll kiss the ground he walks on. I'll walk on hot coals. I grew up on the southside of Chicago and all we had was the blues."

Johnson, a retired noncommissioned officer, has been to three previous King concerts and never got an opportunity to meet King. This time he did.