‘Beast’ aspires to a body beautiful 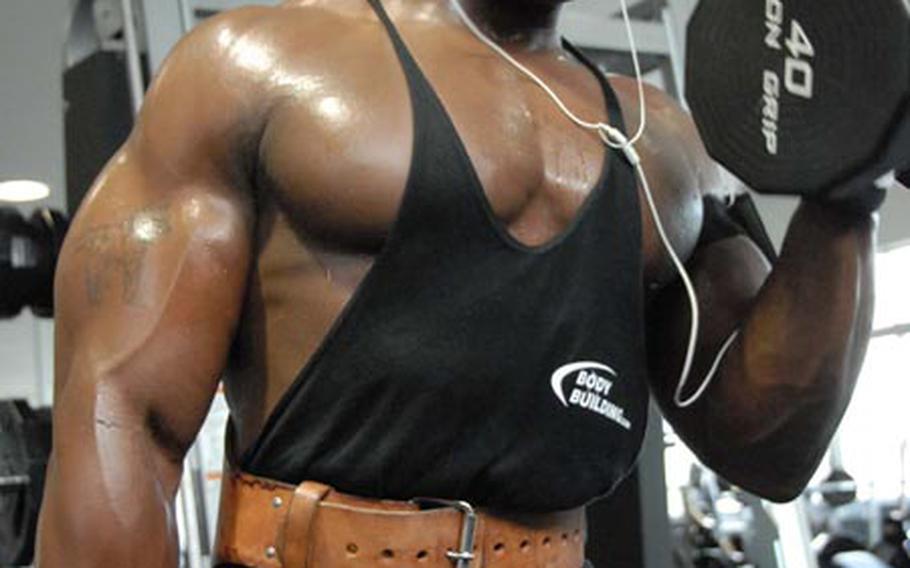 SASEBO NAVAL BASE, Japan &#8212; At a lean 218 pounds, Akaiya "The Beast" Miller is massive even among the most dedicated gym regulars at the Sasebo fitness center.

But the second class petty officer and amateur bodybuilder wants to be more than another face in the weight room &#8212; he wants to be a champion &#8212; and this summer he will find out if he has what it takes.

Miller, a 25-year-old with a rookie heavyweight win, spent the past nine months methodically and relentlessly training to add another 16 pounds of muscle to his rippling frame.

It was preparation for a string of Japan bodybuilding contests in the coming weeks, including Central Japan Bodybuilding Championship at Yokota Air Base on Sunday, which could lead to guest posing gigs, sponsorships and a professional bodybuilding career.

Or if too much water collects in his thighs or his body fat is a couple of percentage points too high, the summer competitions could lead nowhere.

Miller first competed last year at Yokota, a competition open to both servicemembers and Japanese nationals, and he walked away with an encouraging win in the heavyweight division.

His good showing last year ended when he faced Itau Naito, a lean and chiseled 35-year-old Japanese bodybuilder who impressed the judges and edged Miller out of the top overall position during the final round of competition.

"Miller&#8217;s got the size, all he needed to do was harden up," said Pat Coleman, a former professional bodybuilder and director of the Yokota Fitness Center. "The Japanese guy had a much more finished package."

Miller said he came into the competition unfinished, too heavy without enough definition.

He took note of Japanese competitors after his runner-up finish in the overall competition &#8212; their 100 percent dedication and naturally lean frames &#8212; and since November has focused on eliminating their advantage through training.

Outside of his normal weight and cardiovascular routine, Miller has been working out in a Japanese gym in Sasebo using tourniquet training, a method of cutting off blood to key muscles with tourniquets to hasten fatigue.

Organized Japanese bodybuilding dates back to 1955 with the founding of the Japan Bodybuilding Federation, and the country has at least two regularly published bodybuilding magazines.

About 60 percent of entrants in the Yokota competition are Japanese, according to Coleman, and Miller will face about 100 Japanese bodybuilders in the Japan Open Bodybuilding Competition in Shizuoka.

The Tokyo competition has two legs, one in August and one in September.

Top wins in both will give Miller a chance at the Mr. Asia title next year in South Korea, he said.

Miller said he will finish No. 1 in all the Japan competitions &#8212; a promise he made to himself last year.

But before any of his pro-bodybuilding dreams can come true, Miller must go through Naito, who is signed up to compete again this year at Yokota.

"The last five years, the Japanese have won the overall title" at Yokota, said Coleman, who is organizing the bodybuilding event.

Miller said he is a little anxious and nervous but prepared after nearly a year of training.

During a bulking phase in mid-winter, his weight peaked at 260 pounds as he consumed huge amounts of protein and carbohydrates for weight training.

The weight left him struggling through Navy physical training, but he burned away the fat over six months, leaving only the new muscle.

The weeks before a competition are crucial for final muscle conditioning. Miller said he will be tweaking his carbohydrate intake, eating lots of asparagus and sleeping each night in a sauna suit &#8212; an outfit designed to make the wearer sweat &#8212; to create an ideal balance of water in his body.

"Asparagus is a natural diuretic. It flushes the water out so I can get as dry as I can get," Miller said. "You&#8217;ve got to do all the stuff other people are not willing to do."

Too much or too little carbohydrates and water can make muscles look shrunken or flabby and can mean the difference between placing first or second in bodybuilding competitions.

Miller will step onto the Yokota stage this year at about 218 pounds, a substantial increase from 202 last year.

But to be a champion in Japan, he will have to be more than just big.